Not to Worry, They Can’t Innovate

For many years the United States has regarded itself as, and been, the world’s technological leader. One can easily make a long and impressive list of seminal discoveries and inventions coming from America, from the moon landings to the internet. It was an astonishing performance. The US maintains a lead, though usually a shrinking one, in many fields. But:

China has risen explosively, from being clearly a “Third World” country forty years ago to become a very serious and rapidly advancing competitor to America. Anyone who has seen today’s China (I recently spent two weeks there, traveling muchly) will have been astonished by the ubiquitous construction, the quality of planning, the roads and airports and high-speed rail, the sense of confidence and modernity. Compare this with America’s rotting and dangerous cities, swarms of homeless people, deteriorating education, antique rail, deindustrialized midlands, loony government, and the military sucking blood from the economy like some vast leech, and America will seem yesterday’s country. The phrase “national suicide” comes to mind.

A common response to these observations from thunder-thump patriots is the assertion that the Chinese can’t invent anything, just copy and steal. What one actually sees is a combination of rapid and successful adoption of foreign technology (see Shanghai maglev below) and, increasingly, cutting edge science and technology. More attention might be in order. A few examples: A few examples from many that might be adduced:

Supposedly the intent was to make the twins resistant to AIDS. It was done using CRISPR-Cas 9, a gene-editing technique invented in the West by Jennifer Dooudna and Emmanuelle Charpentier but quickly mastered by China. It seemed odd that AIDS resistance would be the goal since the disease is easily avoided. Maybe, I thought, for some technical reason the insertion was particularly easy. But then:

“China’s Genetically Edited Twins May Have Enhanced Brains ‘By Accident’”

“By accident” indeed. Since the researchers admitted being aware of the neurologic effects of CCR5, the gene in question, the experiment sure looked like a shot at increasing intelligence. But maybe not. Then:

Whether the insertion in fact had the effect described, I do not know, and the story maybe or may not be sensationalized. Of interest are, first, that it was an attempt to engineer intelligence, second, that it involved inserting a human gene in a (presumably) lower primate, and third, that the Chinese did it.

Though 5G is usually presented as an improvement to smartphones, it is far more, and the Chinese seem poised to jump on it hard. See below.

It is interesting that China and South Korea are clear leaders in 5G. The US, unable to compete seeks to prohibit its European vassals from dealing with Huawei by threatening sanctions. Germany has refused to obey. .

Whether Forbes’ overstates the facts can perhaps be argued. That China has come from nowhere to be ahead in a crucial technology ought to be a wake-up call. That America has to rely on sanctions instead of better technology accentuates the point.

This year. A couple of decades ago, Chinese students in the US often refused to return to a backward and repressive country. It now appears that Asia is where the action is and they want to be part of it. 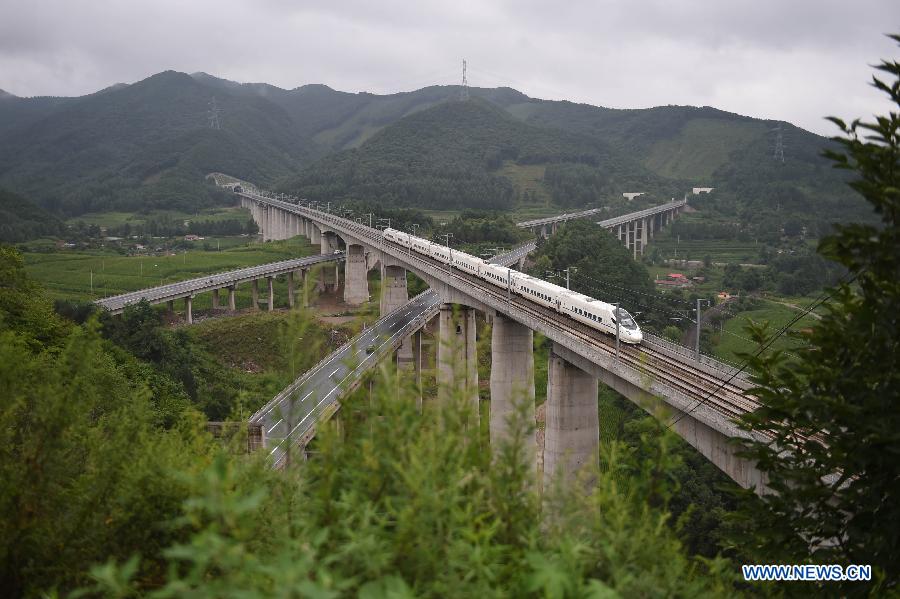 These things are everywhere. Click the link.Inmost countries roads and rails follow the contour of the land. China likes pillars.

Digging subways is expensive and disruptive, cutting highways through cities is destructive of homes and business, so China goes with sky-trains. Building these takes about half the land as roadways. The bridges are built offsite and then erected with a special crane.

A team led by Professor Song Yujun from the Nanjing University’s College of Engineering and Applied Sciences designed an infrared light-responsive nano-carrier to be used for the CRISPR-Cas9 gene-editing tool, which will have great potential in cancer therapeutics. The strong penetrability of infrared light enables scientists to precisely control the gene editing tool in deep human tissue”

I am clueless as to the function of IR in this but, as with so very many stories coming out of China, it does not suggest copycatting. increasingly, the Chinese seem to following from in front.

In a new record, Pan Jianwei and colleagues at the University of Science and Technology of China, eastern China’s Anhui Province, demonstrated a stable 18-qubit state. The previous record of 10 qubits was set by the same team. The breakthrough was made possible by simultaneously manipulating the freedom-paths, polarization, and orbital angular momentum of six photons.

“The speed of quantum computing grows exponentially as the number of qubits in an entangled state increases … the achievement of an 18-qubit entanglement this time has set the world record for largest entanglement state in all physical systems,” Wan

PVG Trains relying on magnetic levitation float on a field of magnetic repulsion, having no contact with rails. This reduces friction and ends wear on wheels and rails. China did not invent the technology but uses it well. Before this train, the trip from downtown to the airport took forty minutes to an hours. Now, eight minutes. The technology is German, the idea a century old, but the Chinese decided that they wanted it, and got it. The ability to make a decision and act on it without years of political wrangling and lawsuits gives China a major advantage over other countries.

“RAND Senior Defense Analyst David Ochmanek discussed the simulations at the Center for a New American Security (CNAS) in Washington D.C. last week. “In our games, where we fight China or Russia … blue gets its a** handed to it, not to put too fine a point on it,” he said, during a panel discussion. Blue denotes U.S. forces in the simulations.”

The reasons for this are several and belong in another column. The military’s utterly predictable response is “Send m ore money” instead of “Maybe we should mind our own business and spend on our economy.” The point here is that the world is changing in may ways and Washington seems not to have noticed.

The list could be extended at length, to cover numbers of patents awarded, scientific papers published, quantum communications, investment in education and technological research and development, supercomputers and chip design and many other things. Beijing is clearly bent on Making China Great Again–as why should it not? Meanwhile America focuses more on transgender bathrooms and whether Bruce Jenner is a girl than on its endless and draining wars. China sends its brightest to the world’s best technical school while America makes its universities into playpens for the mildly retarded. The country crumbles but spends drunkenly of defective fighter planes it doesn’t need in the first place.

(Republished from Fred on Everything by permission of author or representative)

ABOUT THE AUTHOR
Fred Reed, a free soul, lives in Mexico, a country he respects and deeply apreciates. Hos bio attests to his singular sense of independence (in his own words): Fred, a keyboard mercenary with a disorganized past, has worked on staff for Army Times, The Washingtonian, Soldier of Fortune, Federal Computer Week, and The Washington Times. He has been published in Playboy, Soldier of Fortune, The Wall Street Journal, The Washington Post, Harper’s, National Review, Signal, Air&Space, and suchlike. He has worked as a police writer, technology editor, military specialist, and authority on mercenary soldiers. He is by all accounts as looney as a tune.

The Conspiracy Against Trump

French Muslim support of the Yellow Vests ignored by media