An assembly of comfortable, traitorous scum. 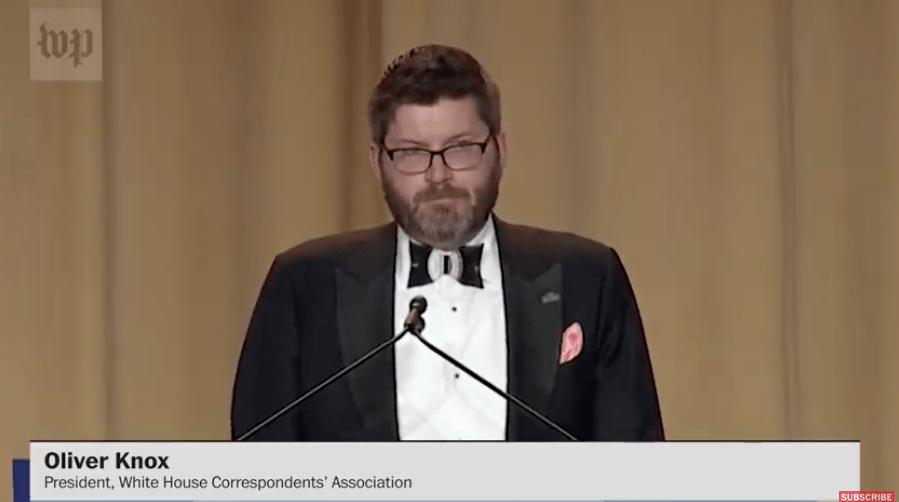 The White House Correspondents’ Dinner in Washington DC on Saturday evening was a travesty.

The organizers staged this year’s event in front of a large banner that read, “Celebrating the First Amendment.” Toasts were actually offered to that amendment to the US Constitution, which guarantees freedom of the press.

Yet no one on the podium referred to either Julian Assange, the WikiLeaks publisher brutally seized and imprisoned by British authorities and facing rendition to the US and the most savage punishment, or Chelsea Manning, also in prison, locked up for refusing to testify before a secret grand jury drawing up fabricated charges against Assange. 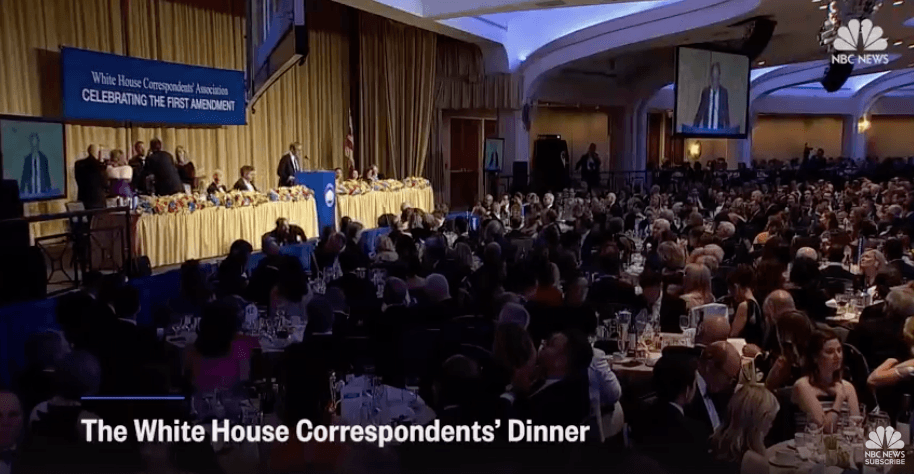 The most notorious persecution of a journalist, confronted by the most powerful state, military and intelligence apparatus on the planet, went entirely unrecognized from the platform on Saturday.

For that matter, none of the 3,000 or so affluent attendees—paying $300 a ticket—who dutifully applauded every reference to “freedom of the press,” climbed to his or her feet and denounced this criminal omission. From this quarter, consisting overwhelmingly of flacks for the CIA and the Pentagon, there was no protest, not so much as a squeak.

The dinner was a feast of fetid conformity and revolting cowardice. That's what the imperial corporate press is all about.—Editor

The Correspondents’ Association is hardly unaware of the Assange and Manning cases. Silence here is thoroughgoing complicity.

The White House Correspondents’ Dinner, held annually since 1921 and attended by every president since Calvin Coolidge, was boycotted in 2019 for the third straight year by Donald Trump, who also forbade members of his staff and administration from attending. 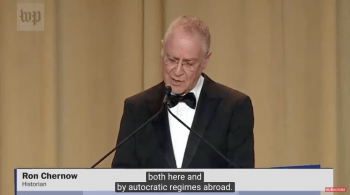 Last year, comic Michelle Wolf, as the World Socialist Web Site noted, “delivered a ferocious, entirely well-deserved and hilarious lampoon of the Trump administration, the Democrats and the press.” The Correspondents’ Association, cowed by criticism of Wolf’s remarks by the Trump administration and the media, determined that it would no longer invite a comic, the tradition since 1983, and instead chose historian and biographer Ron Chernow as its keynote speaker.

In his opening comments, Knox, SiriusXM’s chief Washington correspondent, formerly of Yahoo! News and Agence France-Presse, stressed “how vital a free and independent news media is to the health of this great republic.” He suggested that for the press, everything had changed with the coming to power of Trump.

As noted above, Knox pointed to the plight of various journalists jailed, beaten and even killed by the authorities. “Unfortunately, the list is long and getting longer,” he said, citing in particular the case of Austin Tice, a freelance journalist who was kidnapped in Syria in August 2012. Knox also referred to Jamal Khashoggi, murdered by the Saudi regime, and Wa Lone and Kyaw Soe Oo, Reuters journalists detained in Myanmar.

Many attendees wore pins that read #FreeAustinTice. The pins were provided by Reporters Without Borders. The latter organization issued a tepid statement on April 11 criticizing the seizure of Assange and calling on the UK authorities “to prioritise the principles of freedom of expression and protection of the role of journalism, including journalistic sources, in their treatment of Assange.” 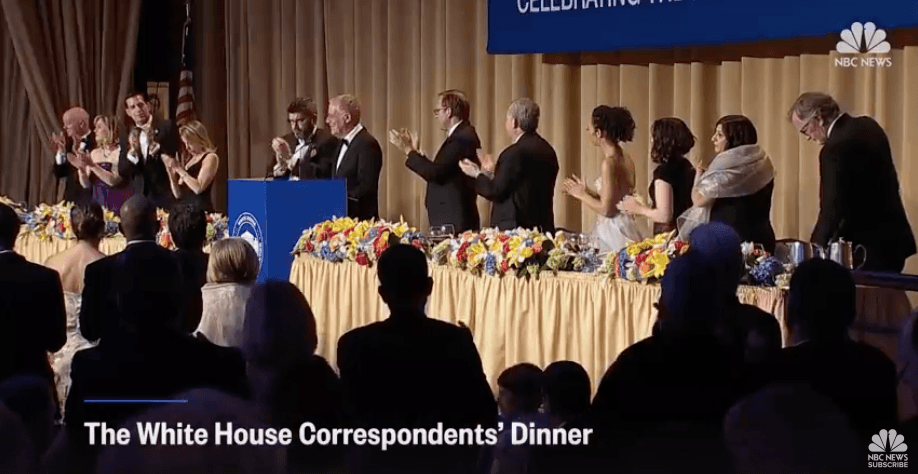 The statement did not demand Assange’s immediate release. Reporters Without Borders obviously did not see fit to raise the WikiLeaks founder’s detention with the organizers of the White House Correspondents’ Dinner.

On May 4, the International Committee of the Fourth International is holding its annual International May Day Online Rally, with speakers and participants from throughout the world. Register today!

Knox alluded to a “crisis of information” and the fact that wide layers of the population were “skeptical of the media,” without indicating where that sentiment might have originated.

As the camera panned the Hilton ballroom and the collection of well-fed, self-satisfied faces, one had to wonder: What is the average income of an attendee at this dinner? Does anything disturb their sleep so much as worries about their careers and incomes?

Knox also introduced Jonathan Karl of ABC News, the next president of the White House Correspondents’ Association. A right-wing figure who has moderated events sponsored by the Koch brothers’ Freedom Partners, Karl is worth a reported $10 million.

In his address, Chernow, author of works on the J.P. Morgan financial empire, John D. Rockefeller, Alexander Hamilton, George Washington and Ulysses S. Grant, demonstrated once again that conscientiousness about historical fact is no guarantee of political perspicacity or principle.

Speaking no doubt for many of those in the audience, Chernow referred to the Trump presidency as “this surreal interlude in American life,” suggesting that the current administration was an abnormality that would pass away like a case of the flu. His comments, which included a potted history of the relationship between the US presidency and the press, were dominated by complacency and liberal banality.

Chernow referred to Henrik Ibsen’s An Enemy of the People (a reference to Trump’s calling the media “enemies of the people”), in which a doctor feels impelled to speak an unpalatable truth—that the local spa water is contaminated—and brings the full wrath of the local establishment down upon his head. Chernow asserted that Ibsen’s doctor is “persecuted for truth-telling,” again, without bringing up the persecution of Assange, one of the few journalists in the world actually engaged in such an activity.

The biographer hailed crusading journalists such as Ida B. Wells, Jacob Riis, Lincoln Steffens, Ida Tarbell and Upton Sinclair, and the example of Bob Woodward and Carl Bernstein in the Watergate scandal and the New York Times and the Washington Post in publishing the Pentagon Papers. “This is a glorious tradition… we can’t have politicians trampling on it with impunity,” Chernow declared.

About the contemporary equivalents of these social critics and muckrakers, Assange and Manning, nothing but a complicit silence! 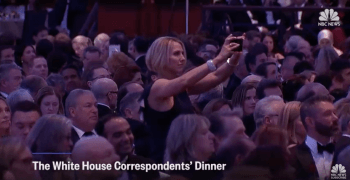 Commonplaces abounded in Chernow’s comments: “Relations between the presidents and the press are inevitably tough, almost always adversarial, but they don’t need to be steeped in venom,” “When you chip away at the press, you chip away at our democracy,” and “America has always been a work in progress,” etc.

Both Knox and Chernow chided Trump for his fractiousness. The speakers clearly longed for a time when there were more “civilized dealings,” in Chernow’s phrase, in Washington. By attacks on freedom of the press, the speakers for the most part seemed to be referring to the inconveniences produced by Trump’s rudeness and his general refusal to play by the traditional rules of the White House press game.

Neither Knox nor Chernow uttered a word about the past and present crimes of the US government, or the buildup of a police state apparatus under previous administrations of both parties—including Obama’s shielding of CIA torturers and NSA snoops and expansion of drone murders—which Trump is continuing and expanding.

The White House Correspondents’ Dinner, all in all, was a miserable and cowardly spectacle, reflecting the deeply right-wing character of the American media, every wing of it. Like the ruling elite as a whole, it does not have the slightest allegiance to democratic rights and principles.

About the Author
David Walsh is senior art, cinema and culture critic at wsws.org, a Marxian organisation.

US Policy: Mass Murder of Migratory Birds Not Our Problem