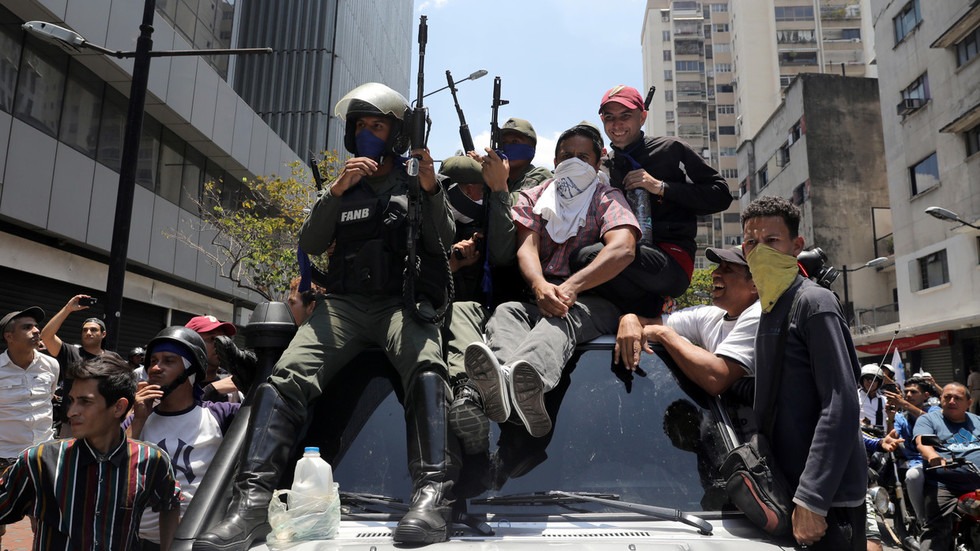 Apparently Washington's entreties and promised rewards have turned some soldiers into traitors. Pro-coup Venezuelan National Guard soldiers surrounded by supporters of Juan Guaido in Caracas, in Caracas, on April 30, 2019 .

Venezuela’s Defense Minister has warned that the army would resort to force if necessary, amid the ongoing US-backed coup attempt, as crowds of opposition supporters were filmed moving towards the presidential palace in Caracas.

“Anyone who comes to [the presidential palace of] Miraflores with violence will be defeated with violence. If we have to use weapons, we will use them,” Minister Vladimir Padrino Lopez said in a televised national address, in an apparent warning to the crowds flocking to the palace.

The minister also said that he holds the opposition led by the US-backed self-proclaimed “interim president,” Juan Guaido, responsible for “any death … on the streets” while accusing the opponents of the Venezuelan government of “seeking bloodshed.”

His statement came as crowds of protesters, accompanied by armed soldiers who sided with the opposition, were filmed moving to the western part of Caracas, where the presidential Miraflores palace is located.  Footage by the Venezuelan NTN24 TV channel showed the streets of the capital flooded with people. The video also showed a group of civilians and armed men in military uniform riding on the roof of a car.

Venezuelan law enforcement appears to be serious about using their weaponry, as shortly after the minister’s warning, a shootout broke out in the vicinity of the country’s Transport Ministry in Caracas. Footage from the scene shows several police officers exchanging fire with unseen adversaries, said to be a group of gunmen, who local channel NTN24 said shot at civilians from inside of the ministry.

Lopez said that the small group of military personnel who joined the coup had been “deceived.” He also stated that “the vast majority” of the armed forces’ members, who initially had sided with the opposition, eventually returned to their units’ barracks and surrendered to their commanding officers.

While the pro-Guaido crowd was moving towards the presidential palace, supporters of President Nicolas Maduro had already gathered for a rally there, expressing their support for the government.

Meanwhile, a large group of bikers, apparently supporters of Maduro, was filmed amassing near the Miraflores palace.

Earlier on Tuesday, Guaido called for decisive action against the Maduro government in a coup attempt that was immediately backed by Washington. Maduro said in response that the Venezuelan Armed Forces remain loyal to the constitution and his government.

An armored vehicle, which appears to belong to the Venezuelan National Guard, has been filmed ramming into a crowd of rioters in Caracas. Clashes have broken out in the capital, amid an ongoing coup attempt.

Footage published on social media by several Latin American TV channels shows three armored military vehicles being confronted by a group of people on a highway in Caracas.

Some of them can be seen punching the vehicles, throwing stones and hitting cars with sticks. At one point, one of the official vehicles is seen ramming the crowd, appearing to run over several people.

It is unclear, though, if the incident resulted in any life-threatening casualties. At least one person can be seen being hit by the vehicle and another one is seemingly lying on the ground following the incident. It is also unclear, who exactly was behind the wheel of the car.

The incident occurred amid reports of clashes between rival groups of the Venezuelan National Guard in Caracas.

Incident apparently explained: it may be a false flag by Opposition forces

Guaido forces (whose identity is still unclear, it could be Colombian special forces or even US operatives, stole riot control vehicles from Maduro's National Guard, and then proceeded to use the "tanquetas" to run over a bunch of their own supprters. The object: A photo supposedly demonstrating the brutality of Maduro's "regime". The video clip is being widely distributed on US and Latin American tv channels. The caption for this tweet reads: Pro-Guadio military steal vehicles from Maduro's units only to use them to roll over Guaido supprters and in this manner create a civil war conflict and through hybrid war tricks ask for US intervention.

Military that participated in the coup explains how they were deceived by Fuaido and the opposition.

CRAIG MURRAY: So Where is the Swedish Warrant?