Iran, Judeophilia And Dementia On The German Left 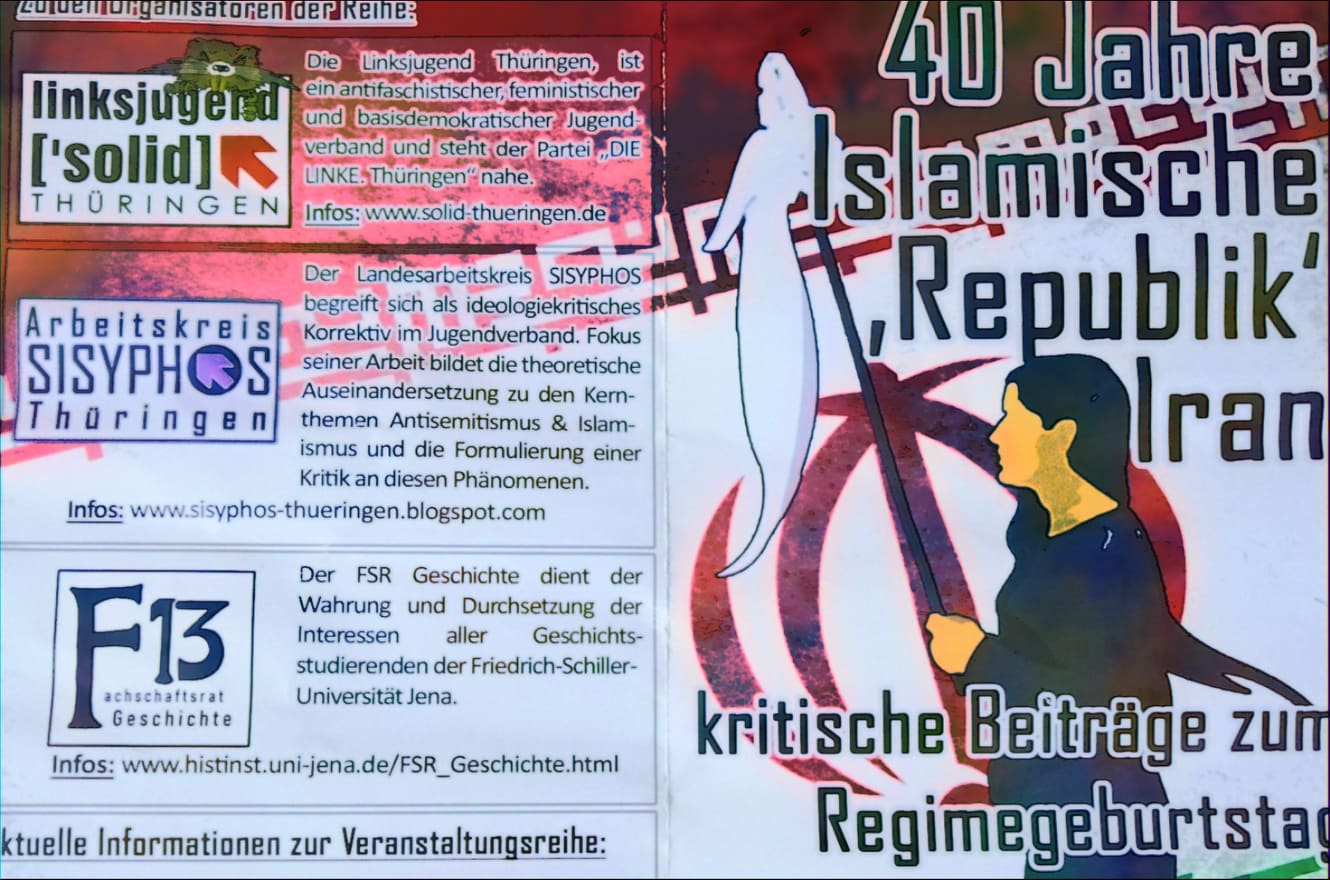 A form of smug, extreme, namby-pamby, politicaly correct but utterly imperialist liberalism rules Western Europe. It stifles truth effectively and paralyses any real advance to the left. Germany and Britain lead the way.—Editor

[dropcap]J[/dropcap]ust like silence, an action or an image, a simple sheet of paper can also say more than a thousand words. The brochure that invites to the conference “40 years of the Islamic Revolution of Iran” is a reflection of the intellectual shipwreck that prevails among a big part of the German left youth and also in most of Western Europe. Among the organizers are the Left Youth of Thuringia (“Linksjugend Thürinen”) close to the Left Party (“Die Linke”) and the Work Circle Sisyphos (“Arbeitskreis Sisyphos”). Both shamelessly state that there is a “dementia on the left” when it comes to the Iran topic. And indeed, there is but only their own.

There is so much wrong within this pamphlet that is even hard to know where to start from. Let´s begin with the women in Iran. In the brochure it’s stated that the Islamic revolution has had “fatal consequences” (“gravierenden Auswirkungen”) for the women and that they have been “relegated” (“verdrängt”) from public life. Certainly through the lens of a specific western-bourgeois value set, itself within the context of its time and place, women in Iran can be said to live under repressive religious conditions, and while these differ quite a bit from those of Saudi Arabia, nonetheless in my experience teaching German for refugees from middle east countries, I can say without trying to make an apology for the Iranian theocracy, that the women from Iran have a better education and health, and participation in civil society than most of the Gulf-state countries which continually get the pass.

Also contradictory this “left” that organizes this conference and drops crocodile tears about the religious repression of the women in Iran, is the same “Left” that vehemently defends the right of Muslim women to wear a veil in schools undermining the secular State like in the case of France.

This German “left” has been politically castrated in regard to Israel since World War II. It largely mixes the meanings of anti-Zionism with anti-Semitism (a concept that by the way they don’t even comprehend, not in its etymologic aspect at least. Semites are not an ethnic group, but a linguistic one, within which also Arabs and Arameans are to be found).

In their rhetoric this group depicts Iran as a “threat for Israel and to the region” (“Sicherheitsrisiko”) because of their supposed possession of weapons of mass destruction (yes! The good old reliable pretext!), its support for Hezbollah and its “imperialist” interventions in Syria and Yemen. They demand the cessation of a supposed tolerance or “appeasement” from the European Union towards the Iranian government. This has two equally wrong preconceptions. First that the EU has the moral authority to condemn foreign governments. And second that the EU is a force of peace and good in the world that has the responsibility of actively export this supposed superior model. The western´s old Delusion of Grandeur.

This German “left” has been politically castrated in regard to Israel since World War II. It largely mixes the meanings of anti-Zionism with anti-Semitism (a concept that by the way they don’t even comprehend, not in its etymologic aspect at least. Semites are not an ethnic group, but a linguistic one, within which also Arabs and Arameans are to be found). To criticize Israel makes one not an anti-Semite, first because Hebrews are not the only Semites (no matter how much they kidnapped this term), and secondly because one doesn’t criticize Israel because it’s a largely theocratic Jewish State, but because of its State´s terrorism and its apartheid practices, expulsion or-and extermination towards the Palestinian people, and the ongoing occupation of Palestine and Syria. At most one could be anti-Israel, which by the way is almost a confessional State just like Iran. But unlike Iran, Israel have bombed almost each and every neighboring country, including terrorist attacks within Iran, without being taken account for by any international organization – and it possess nuclear weapons and submarines capable of launching those weapons (thanks to Germany). So, which country is enjoying  “appeasement”?

They are right (they had to get something right) when they say that the Iranian revolution wasn’t exclusively the product of Khomeini but it was a wider process in which more forces took part. They should take this more into account before jumping into light conclusions on geopolitics, because sometimes they resemble more an Israeli pressure group in America or old Shah nostalgics than a political leftist group. One gets the impression that under their slanted view the only missing things in Iran are mini-skirts and Hollywood. But this is a problem that the new European “left” has been dragging on for years now.

This “left” has taken liberalism’s postulates as struggle banners and pretends to make them be exclusively banners of a “new-democratic-left”: feminism, LGBTQ rights, migrants, animal rights, drugs legalization etc.

They ignore that all these banners are struggles which also the Bourgeoisie embraces as its own, sincerely or hypocritically, under the widest manifestations of the political right. Those are mainly individual freedoms, more of the likes of bourgeois revolutions, that although they are undeniable, they remain individual freedoms, and as such, the fight for them is limited : the right not to being discriminated, to exercise one’s sexual freedom, etc.

What is lacking remains any analysis from the class struggle perspective or any claim for a deep redistribution of wealth through socialization of the means of production, a method and a banner that are actually exclusive and inherent to the political left. But federal Parliament member Katja Kipping from The Left party (“Die Linke”) already made it clear to me during a discussion about the basic income in that took place in Weimar. Under her logic the working class only need crumbs and more free time to be “creative”. The capitalist system is therefor reformable.

The “left’s dementia” that this group argue is not to ask for tolerance towards the Iranian government. No one does. Their own dementia is to equal a supposed “Iranian imperialism” to the one of the USA, the biggest world imperialist super power [probably ever] with hundreds of military bases everywhere – that´s imperialism. Their dementia is to compare the military support from Russia, Iran, Iraq and Hezbollah to Syria (all of them legally requested by Damascus' legitimate government) with the illegal occupations, bombardment and interventions of the USA, Israel, Turkey and others into Syrian sovereignty. But the biggest and worst dementia of this pseudo left is to demand sanctions against Iran! (SIC). Do they ignore the suffering that such measures already caused to largely civilians in countries like North Korea, Cuba, Venezuela, Iraq, Russia and such?

After all the nonsense uttered in this worthless brochure, one can be very glad about two things: first not having to go to this ludicrous "grand" conference, and secondly that this “left” has as top priority the struggle of the petite-bourgeoisie individual freedoms and not the seizing of the means of production. Because if their judgment on economics is exactly as bad as their one on geopolitics, we would be in deep trouble.

The nationalist “socialism” of Bernie Sanders