Home IRAN Will the U.S. And Israel Wage A “Summer War”?

Will the U.S. And Israel Wage A “Summer War”? 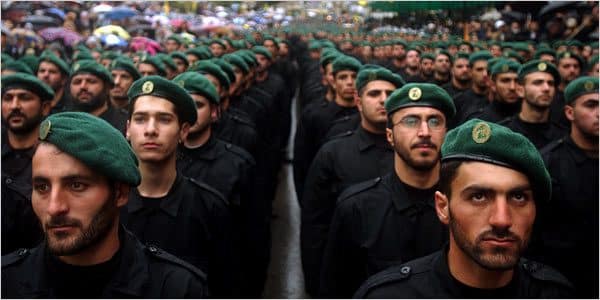 Hezbollah soldiers: a tough army attached to principles, not to a formal nation.

J. Swift comments at the end of the Iran JCPOA thread (emphasis added):

After sleeping on all the increasingly shrill statements being issued by Bolton & friends designed to amp up pressure and generally beating the war drums against Iran, I woke up with a strange thought this morning. For some time there have been indications that Nuttyahoo is angling toward a summer attack on Lebanon/Hezbollah. The US has been seeing its own influence in Lebanon waning, and of course Bolton wants an excuse for a heavy but "limited" strike on Iran. I say "limited" because I'm sure the actual military planners have been pretty blunt about what an actual full blown war with Iran would look like, and it wouldn't be good. But just as with Venezuela, the neocons tend to believe their own propaganda, and believe that all of their enemies are at the tipping point because of all of their economic warfare, such that military strikes on critical civilian infrastructure is all it would take to induce the population to "throw off the yoke of oppression."I understand the US already has a tripwire presence in Lebanon, and with all the odd, vague warnings about Iranian proxies and impending attacks, and rumblings of Israeli designs on Lebanon, and the "intel" being overtly Israeli supplied, what if it's all connected? What if the Israelis have convinced the US neocons that they are willing to "take out" Hezbollah, to secure themselves some of that peace and security, and all the US has to do is a lot of the dirty work (provide air support, etc.). Since Hezbollah is probably the most famous "Iranian proxy," the implied threat would be that if Hezbollah in any way tries to defend itself or especially strike back at Israel (which of course they will), Bolton will declare that Iran must be punished for its aggression against beloved Israel, and a massive air and missile strike will be unleashed on Iran, in hopes that it will then just roll over. If Iran tries to close the Straights, then Venezuela will be struck in like manner. Yes, I know it's all demented, but since that pretty much describes every US war plan for the last 20 years, it makes one wonder....

First: I am not aware of a U.S. "tripwire presence in Lebanon". There are, on and off, a few U.S. special forces training the Lebanese army but that is it.

There are indeed strong rumors of an attack on Lebanon during this summer. There have been discussions within Hizbullah about an expected summer war were leaked to Elijah Magnier and Abdel Bari Atwan. Hizbullah denied the reports but both are serious journalist with the necessary connections.

In his May 2 speech Hassan Nasrallah, the Hizbullah leader, talked about a threat of war against Lebanon. According to him the threat of war was not communicated from Israel, but by the Trump administration:

US Diplomats pressuring Lebanese state to give part of our territorial waters to Israel for it's possible oil and gas resources, but we will not even give them a cup of water.
US Diplomats threaten Lebanese government with war against Israel if they do not get rid of Hezbollah's ballistic [missiles] capabilities.
Israeli strategists warn of deadly weak points in IDF, despite affirming it's strong points, And I warn them of Lebanon's deadly strong points, despite it's seeming weak points.
The Axis of Resistance, in spite of sanctions, is stronger than ever.
Everyone in Israel agrees that any future war with Lebanon must be brief, decisive, and ending with a clear Israeli Victory; but who can do that now? These days are gone.
Israel that fears war with blockaded and surrounded Gaza can never hope to set foot in Lebanon.
We promise all Israeli units thinking of crossing Lebanon that they will be destroyed and humiliated on Live TV.

Current U.S. relations with the government of Lebanon are bad. The U.S. would certainly give Israel a green light should it want to wage a war. It may even entice it to attack Lebanon. The purported aim of such a war would be to destroy Hizbullah's long range missiles. Another aim would be to bring the Lebanese government under control of a USrael friendly leadership.

Both aims are delusional.

Much of Israel's vulnerable economic points would be hit before even a small share of Hizbullah's missiles would be found and eliminated. The recent short war with Gaza has again shown that Israel is not willing to sustain much damage in a fight and tried to stop it as soon as possible.

Lebanon has been through a long civil war and found a modus of understanding that underwrites the current government. That can only be changed through another civil war which no one in Lebanon is willing to fight.

Hoping that a war on Lebanon would solve any of Israel's problems is unrealistic and can only be believed in Washington DC. Israel's Bibi Netanyahoo knows of the danger and he is not a risk taker. Moreover Hizbullah's retaliation capability is only one of many reasons why a war seems unlikely.

Then again - the Islamic Jihad, a group that fights next to Hamas in the Gaza Strip but is financed by Iran, also speaks of a summer war.

The partners of the 'Axis of Resistance', Hizbullah in Lebanon, Syria, Iran and Shia militia in Iraq, announced several times that they would support each other in a war against Israel. It is thus likely that any attack on Lebanon (or Syria, or Iran) would see a response from another country. Hassan Nasrallah, for example, is on the record that he would "do his duty" should Iran be attacked. Any war could thus escalate in unpredictable ways.

While some hawks in the U.S. would probably welcome such an escalation, neither Israel nor its silent allies in Saudi Arabia and UAE would escape from receiving significant damage. They know this and will act accordingly.

The most important reason why a summer war is unlikely is Donald Trump. He wants to win a reelection. A months long, unpredictable war that might cause serious damage to Israel and other U.S. allies in the region could be catastrophic for him.

Some of his advisors, most obviously John 'Stache' Bolton, but others too, may well try to instigate a war. But the ultimate 'decider' is Donald Trump and I, for now, see no reason for him to wage one.

‘How Does the US Compensate the World for the Damage It Has Done?’