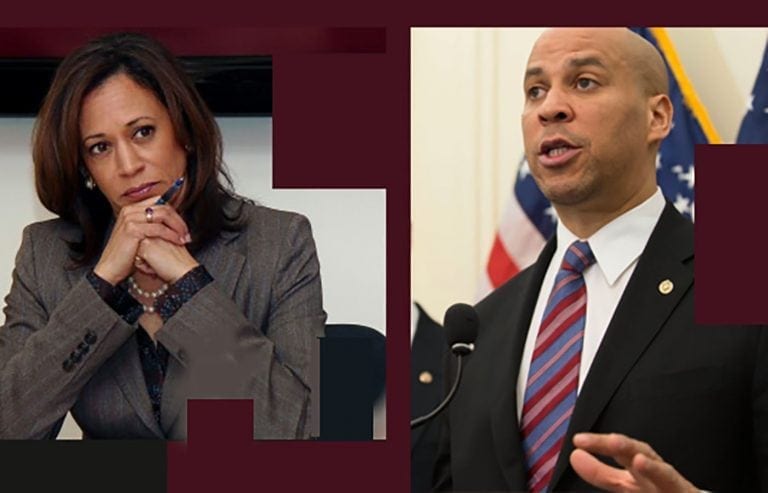 Kamala Harris and Corey Booker: An all-black ticket that is making the identity politics crowd salivate, but symbols like these do more to divide than unite and they are actually cynical distractions from the real criteria to select leaders in this or any country

On May 12th, Politico headlined “‘A dream ticket’: Black lawmakers pitch Biden-Harris to beat Trump”, and reported that:

The Congressional Black Caucus may have found an answer to its Joe Biden dilemma: Vice President Kamala Harris.

Some black lawmakers are agonizing over whether to back Biden or two members of the close-knit caucus — Sens. Harris and Cory Booker — who are also vying for the White House, according to interviews with a dozen CBC members.

But with the former vice president jumping out to a huge, if early, lead in the polls, several CBC members are warming to the idea of a Biden-Harris ticket to take on President Donald Trump.

Harris is everything the 76-year-old Biden is not. The freshman senator from California is younger, a woman and a person of color. …

America’s billionaires — who love it when the public are so obsessed with “Blacks versus Whites” or “women versus men” or other such distinctions amongst the public — hire politicians and ‘news’-media that play up to those distinctions instead of to themselves versus the public, because this way the public will accept those billionaires’ controlling the government — as they do.

Therefore: the first question that should be asked of every Democratic Presidential candidate isn’t (like it is) “man or woman?” or “Black or White?” or “Muslim or Christian?” or anything like that, but instead: Did you vote for the invasion of Iraq, and of Libya, and for economic sanctions (which are the first step toward declaring a nation officially as being an ‘enemy’ and thus the first step toward war) against Iran, and Syria, and Venezuela, and Russia?

Blacks are just as bigoted as Whites, and women are just as bigoted as men — and that goes also for Jews, Christians, Muslims, and every other distinction within the public — every other rage by the public, that’s being redirected away from the billionaires (who virtually own the government) to being instead against some mass of the public who DON’T control the government, and who AREN’T the cause of this country’s massive economic inequalities of opportunity, and who DON’T benefit from extending the American empire by bombs (or otherwise) to Afghanistan, and Iraq, and Libya, and Syria, and Iran, and Venezuela, and Ukraine, and Russia, etcetera.

Therefore: the first question that should be asked of every Democratic Presidential candidate isn’t (like it is) “man or woman?” or “Black or White?” or “Muslim or Christian?” or anything like that, but instead: Did you vote for the invasion of Iraq, and of Libya, and for economic sanctions (which are the first step toward declaring a nation officially as being an ‘enemy’ and thus the first step toward war) against Iran, and Syria, and Venezuela, and Russia?

Those international hostilities are just great for the billionaires’ corporations, such as Lockheed Martin, but they bring billions to the billionaires and nothing but increased taxes and death and disabilty to the public and to our soldiers — and vastly worse to the people who live in the tragic lands where we are sanctioning or invading, or doing regime-change by means of coups. So: they hire the distractors.

This isn’t to say that Trump isn’t a racist, but it’s about how the billionaires’ Democratic Party agents who are in Congress deal with this in such a way that the racist distractionism is on both sides and drowns-out any authentic progressivism (that being what the billionaires of both Parties fear). Part of progressivism is an opposition to regime-change wars — international dictatorship (including not only invasions but also the earlier stages: economic sanctions, and coups). The U.S. violates international law whenever it does those, and it does the vast majority of the ones that are done. The U.S. is thus the last nation in the world that should be pontificating to other countries. Whenever the U.S. Government does it, we should all be ashamed of it.

So: the billionaires need the distractionaires.

The Congressional Black Caucus, according to Fact Check, as posted in 2008 and never since revised, “has never had a white member in its 36-year history” (and, today, that would be never in its 47-year history), so that if for example Bernie Sanders or Pete Buttigieg or maybe even the warmongering Joe Biden himself, were to apply to join and then be turned down by them, and this were to become public, then the resultant bad publicity for that Caucus would likely reduce, instead of increase, that candidate’s standing with black voters. Consequently, he probably won’t even apply to join.

In any case, being a member of a victimized group doesn’t mean that one is less bigoted than other groups are. And who is to say that Americans weren’t bigoted against Iraqis when we did to them the catastrophe that we did?

Gabbard Says She’d Drop All Charges Against Assange And Snowden