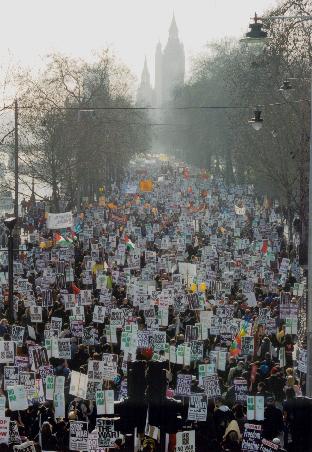 The Iraq war was the last time we saw mass demonstrations against "imperial wars of choice". This is the London demonstration in 2003. The marches proved that the US-led bourgeoisie, notably the anglozionists, could care less about public opinion. The British actually staged some of the biggest demonstrations—to no avail. Democracy anyone?

It was way back when, right before our nation performed the most horrific act of preemptively  attacking and invading Iraq... which was not only illegal, but highly immoral. I was at the video store rapping with my friend Kenny the mgr. Now Kenny the mgr. was such a nice guy, despite his very conservative views. He enjoyed reading my columns, yet still would always comment “Your views are really waaaay out there- but on some of them I actually do agree.” Like what I asked? “Well, I agree that we could have and actually need some sort of national healthcare for all of us, if the gov’t would cut down on excess spending... like giving money to all those regimes throughout the world that care diddlysquat about us!”

We got to the subject of conducting a war vs. Iraq. I stated the underlining fact that is rarely discussed on the mainstream media-. That being that such a war would cost us taxpayers over 100 billion smackeroos.

Suddenly, as if out of nowhere, this young mother, on line with two young sons swinging from her arms,  shouted with such vigor “He’s got it now! We cannot wait any longer! He has the uranium and he’s a danger!”  Kenny assured her that ' I myself do not like or support someone like a Saddam Hussein, but'... She cut him off with “He can make the big one pretty soon-. He’s got to go before he uses it!” I asked the two of them why would this guy, if and when he had “The Bomb”, why would he risk losing his power, his country and, more importantly, his LIFE? Why would he use this bomb as a preemptive strike (sound familiar Georgie Jr.?) when it would be the LAST thing he would do alive? I concluded that men like him want to live as much as the next guy (or despot) especially since they live so well . They want to die of old age in a nice warm bed with their power under their pillow, and not go up in flames just to say “gotcha first”. Finally, I intimated that the only way this guy would use any “weapon of mass destruction” (seemed to be the phrase of the day ) would be if he were cornered and trapped like the proverbial rat that he is. Isn’t that usually when rats attack?

Mother in War was already swinging her kids, movies in hand, out the door, shouting back that I was crazy to ever trust this madman. I tried to answer her about which country had the greater madman, but she was already climbing into her Land Cruiser with (I kid you not) license plates that read Support Education.  I wanted to tell her that the $100 billion we would save could go pretty far in supporting education, as well as better healthcare for me, her and her swinging kids. Too late, she was off into the Friday traffic, getting her 12 miles per gallon. I guess this “War” with Iraq could go a long way for her. Perhaps the 112 billion gallons of oil under Saddam’s bed would help lower gas prices.

Finally, I scratched my head in wonder. Isn’t it so easy for any of us to send troops into war, like they did in the 60’s when many of my schoolmates returned in “zipped bags”? So easy to send some other mother’s son to fight and die. I wondered if a) Mother in War's boys were 18 and 19, not 3 and 4 and b) we had a military draft in place. I wondered how “gung ho” Mom would then be. Perhaps she’d load her boys into the Land Cruiser and gasguzzleit to Canada instead of some troop transport.

Once again the John Boltons , Elliot Abrams,  the ghost of good old hero John McCain ( he of ' Bomb Bomb Bomb Bomb Bomb Iran' to the tune of the Beach Boy's song Barbara Ann) and all the other war mongering cowards are once again banging the drum. Before we ‘sign off” on giving this (or any) President the power to wage war without a Congressional declaration, as  what transpired regarding the Iraq invasion, we and our politicos should have investigated all the facts, and all the options. Hear that Mother in War? Your boys could now be ready to land in Tehran.