The unrepentant Troika of Tyranny—World Class criminals by any standard, and the faux "resistance" is just about as bad.

[dropcap]T[/dropcap]he U.S. “troika of tyranny,” Trump, Bolton and Pompeo, are making things up as they go along, seeking to bend the planet to their lawless will.

“The activists who chose to protect the Venezuelan embassy from Guaido and the other Venezuelan traitors are showing us the way to move forward.”

This columnist has spent many years predicting a United States war on Iran. There is now a president who may finally make good on that long expressed threat. Donald Trump is deep in the thrall of Saudi Arabia and Israel, the two nations that pose the greatest risk to Iran. He happily does their bidding and is in a position to bring the sick neocon fantasy to reality.

But the U.S. excels at nothing except creating misery for millions of people and raising the risk of an all out hot war.  Cuba recently instituted rationing after Trump returned to the bad old days of strict sanctions enacted against that nation. More than 40,000 Venezuelanshave lost their lives as a result of the crushing sanctions imposed on that country. Iran suffered catastrophic flooding but not one country would provide them with needed aid because U.S. sanctions prevented them from doing so.

“More than 40,000 Venezuelans have lost their lives as a result of the crushing sanctions.”

Aside from starving civilians and depriving them of medical care, the U.S. can’t do much else that doesn’t create dangerous consequences. The latest regime change attempt failed miserably and exposed the limits of U.S. power.  The Venezuelan coup attempt was a complete farce . Hand-picked puppet Juan Guaido never had more than 25 soldiers on his side, and those few were tricked into showing up for what amounted to a photo-op.

In the interim, National Security Adviser John Bolton and Secretary of State Pompeo have proven themselves to be the worst in a long line of bad foreign policy decision making. First they accused Iran of some unspecified aggressive act and sent a fleet of ships to make their case for a war of aggression. Then Pompeo scheduled meetings with Russian foreign minister Sergei Lavrov to be followed by talks with Vladimir Putin himself. But he chose to cut short his time in Russia in order to meet with Europeans and enlist their support for action against Iran.

“Hand-picked puppet Juan Guaido never had more than 25 soldiers on his side.” 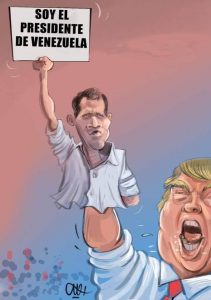 All of the bluster, meeting changes and dispatching navy vessels to the Persian gulf prove one important point. The U.S. “troika of tyranny,” Trump, Bolton and Pompeo, are making things up as they go along. They picked a trade fight with China that they could not win. They want regime change in Iran and Venezuela but they won’t get the results they want even if they carry out military attacks.

In the meantime they fall back on the old tricks of false flags, in this case blaming Iran for a mysterious and conveniently timed oil tanker explosion in the United Arab Emirates. The Saudi puppets are obviously part of the plan and right on cue claim to have been sabotaged .

The United States has willing vassals such as the NATO member states. It has the biggest military in the world. It can attack Venezuela or Iran but faces serious consequences should it do so. Iran and Venezuela have friends, namely Russia and China. Those two countries have developed a strong alliance in order to protect themselves from the crazed and unpredictable Americans.

“They fall back on the old tricks of false flags.”

The U.S. continues to up the ante with phony requests to attack Venezuela allegedly coming from the dupes who thought the United States would put them in power. It isn’t coincidental that the activists protecting the Venezuelan embassy were expelled at the same time.

The evil war mongers are very stupid but that it isn’t a cause for celebration. Unintended consequences have already led to two world wars and millions of dead.  Unfortunately no one who ought to educate the public on this subject are doing what they should. The corporate media always support presidents at war. Even supposedly liberal outlets have spent years demonizing Russia, Venezuela and Iran. In so doing they have made the population ignorant and or blood thirsty. Democrats in congress are equally imperialist and will say nothing as the government plans a humanitarian catastrophe. At most they will mutter that Trump must ask for their approval before killing thousands of people. Instead they carry on the discredited Russiagate story but oppose none of the things that actually make the Trump administration so dangerous.

“At most Democrats will mutter that Trump must ask for their approval before killing thousands of people.”

But Russiagate and phony claims of a constitutional crisis were intentionally created for this moment. When the United States most needs détente and a lessening of tensions, the lies meant to make Russia look like an aggressor are repeated and make war more likely.

Only the people can lead the United States away from disaster. The activists who chose to protect the Venezuelan embassy from Guaido and the other Venezuelan traitors are showing us the way to move forward. Leftish Democrats won’t help us. The media will continue to lie in service to the state. The “resistance” aren’t angry about anything except a faux scandal. Those of us who want peace will have to say so and demand that our representatives work for the people and not for the cause of war and suffering. There will be no saviors for this country or for the rest of the world. We can only rely on ourselves.

It’s Even More Terrible Than You Thought

No, There Won’t Be A War With Iran, But Rather A Slow-Motion Strangling