Home AMERICAN BRAINWASH It’s Even More Terrible Than You Thought

It’s Even More Terrible Than You Thought 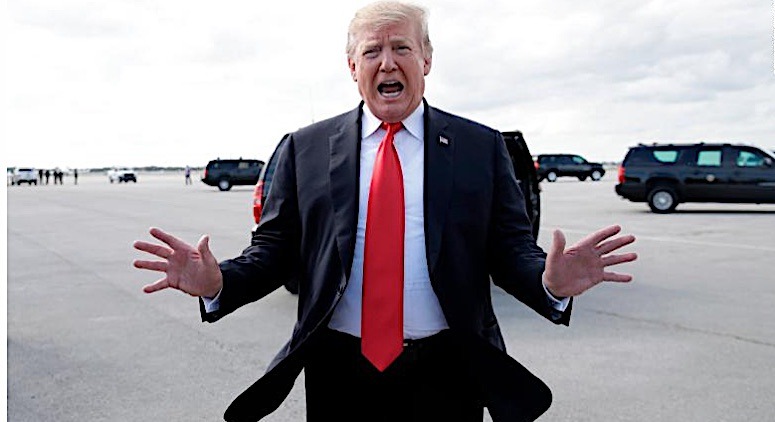 [dropcap]L[/dropcap]iberal journalist and author David Cay Johnston, a frequent cable news commentator, was right to title his 2018 book on the Trump presidency “It’s Even Worse Than You Think: What the Trump Administration is Doing to America.” Trump is a creeping fascist train-wreck – an authoritarian disaster whose lawyer recently argued in federal court that Congress has no right to investigate wrongdoing by the President of the United States (take that, Watergate heroes and Whitewater fans!).

But it’s even worse than Johnston and his admiring CNN and MSNBC interviewers and co-panelists want us to know. The Democrats were neoliberal partners in Trump’s ascent; now they seem determined to ensure the second term of a presidency that could ring the death knell for what’s left of U.S.-American democracy. Loathe to impeach the impeachment-worthy Trump since they think (correctly perhaps) that action would enhance his chances for re-election in 2020, establishment Democrats are working hard again, as in 2015-16, to undermine the presidential candidacy of the Democratic contender who is most able and ready to rally the disadvantaged constituencies who will have to turn out if the orange monster is going to be removed by ballot in 2020.

That candidate is the neo-New Deal progressive-populist Bernie Sanders. He is the target of a multi-pronged “Stop Sanders” movement within the Democratic Party and across its many establishment media and non-profit outposts. This reactionary operation includes at least ten related lines of attack:

+1. Flooding the primary campaign with such an absurdly large number of candidates that Sanders will likely be unable to garner the majority of primary delegates required for a first-ballot nomination at the 2020 Democratic National Convention in Milwaukee.

+2. Coordination among the Democratic Convention superdelegates—the more than 350 county and state party bosses and elected officials who are granted delegate status without election—to vote as a bloc to stop Sanders on the convention’s second ballot. (These superdelegates exist precisely for the purpose of blocking challengers to the party’s corporate establishment.)

+3. Ongoing efforts to change state party elections from caucuses to primaries, as caucuses are friendlier to progressive challengers. (Sanders won 11 of the nation’s 18 caucus states three years ago.)

+4. The disingenuous theft of many of Sanders’ sincerely held progressive policies by corporate candidates who have no intention of fighting to implement them if they attain the presidency.

+5. Appealing to the name recognition of the right-wing corporatist-imperialist Joe Biden, along with the public’s misplaced nostalgia for Barack Obama’s Wall Street-captive presidency—both of which will be wielded as weapons against Sanders’ progressive populism.

+7. The Democratic Congressional Campaign Committee’s sickening decision to block contracts with campaign consultants and other political vendors who agree to work for progressive challengers in the 2020 primaries. (Besides seeking to protect Congress itself as a corporate preserve, this move aims to deny Sanders congressional allies and undermine his ability to govern if elected.)

+8. Recurrent claims that Sanders “isn’t a Democrat” even though Bernie has long functioned essentially as one in Congress and Vermont politics (his “Independent” status is for show).

+9. Smearing Sanders’ popular social-democratic policy agenda as “fantastic,” “unaffordable,” “unrealistic” and too dangerously “socialist”—this while Democratic elites refuse to acknowledge the fascist tendencies of the president they helped elect in 2016.

+10. Branding the eminently electable Sanders “unelectable” on the grounds that he is an “extremist” who is “too far left” for the U.S. electorate generally and independent voters specifically. In reality, the opposite is true. Sanders appeals to independents (who are nowhere near as conservative as is commonly reported), people of color, infrequent voters and the white working-class that has largely abandoned the Democratic Party. His anti-establishment message, coupled with his long record of representing rural voters, makes him highly competitive with Trump, not only in the Rust Belts states where Hillary Clinton faltered but even in some dark red states like West Virginia. (Even Karl Rove believes Sanders could defeat Trump in 2020.)

It’s nasty stuff, but it’s nothing new and nobody should be surprised. The Democratic Party exists to serve its corporate clients. Consistent with their party’s Big Business bankrollers’ bottom line world view, establishment Democrats would rather lose to a fascistic white-Amerikaner right than to even the mildly social-democratic left within their own party. It’s why the late left-liberal political scientist Sheldon Wolin labeled them “the Inauthentic Opposition.”

Sadly, none of this “Stop Sanders” stuff has stopped Sanders from being the first Democratic presidential candidate to declare his readiness to work on behalf of the party’s eventual nominee to defeat Trump in 2020. In 2019/20 as in 2015-16, Bernie seems masochistically determined to advance-pledge allegiance to a corporate party that treats him with sheer ruling-class disdain.

And this time, as during the last presidential election cycle, that – along with his refusal to call for massive cuts in the giant Pentagon System (which sucks up hundreds of billions of dollars that are needed to address massively unmet social and environmental needs at home and abroad) – ought to raise questions about how committed Sanders really is to his progressive policy agenda. Especially during the terrible time of Trump the Terrible, there are respectable arguments to be made on behalf of Lesser Evil tactical voting in contested states during U.S. presidential elections. Surely, however, Sanders should not be giving the game away so early, squandering whatever leverage he might be able to wield with the threat of an independent run well before the primaries have even begun.

Meanwhile, speaking of insufficiently radical Democrats, we have the following nauseating Tweets from Liz Warren:

“Climate change is real, it’s worsening by the day, and it’s undermining our military readiness. More and more, accomplishing the mission depends on our ability to continue operations in the face of floods, drought, wildfires, desertification, and extreme cold.”

“The Pentagon is the single largest government consumer of energy, and it’s dependent on fossil fuels. To improve military readiness and help us achieve a #GreenNewDeal, the Pentagon should achieve net zero carbon emissions for all its non-combat bases and infrastructure by 2030.”

“We don’t have to choose between a green military and an effective one. My plan will improve our service members’ readiness and safety, and achieve cost savings for American taxpayers. Together, we can fight climate change—and win.”

Three cheers for the Senator from Raytheon! She wants to improve the energy efficiency of Uncle Sam’s death-dealing war and empire machine, whose mission was aptly summed 28 years ago by Noam Chomsky: “Deterring Democracy.”

By all means, let’s greenwash the mass-murderous Pentagon System! Maybe Senator Warren can argue to get Trump’s war on Iran delayed until he can be made to promise that it will be LEED-certified.

ABOUT THE AUTHOR
Paul Street’s latest book is They Rule: The 1% v. Democracy (Paradigm, 2014)