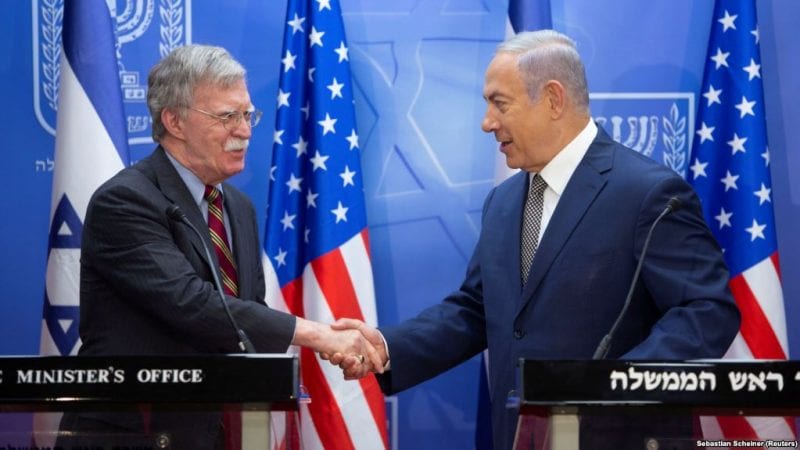 Bolton shaking hands with one of his true bosses.

Simon and Garfunkel, from their 1966 hit song Sounds of Silence, forecast it best:

And in the naked light I saw ten thousand people, maybe more

And no one dared disturb the sound of silence

And whispered in the sounds of silence

How appropriate that this 50+ year old song lyric resonates within our Amerikan empire today. Look at what our gung ho militaristic , almost (sadly) fascistic nation is currently engaged in for what they disgracefully label as foreign policy. The CIA and other covert operatives have been manipulating for regime change in the sovereign nation of Venezuela. Elections there mean nothing if our puppets cannot win! Economic sanctions cripple that economy, and our banks, along with our lackey ' trading partners' , freeze Venezuela's assets. Then look over at Iran. The ' chump Trump' gang follow the bidding of whomever pulls its strings to bang the war drum against them. As the great geopolitical analyst Peter Koenig describes, it's mostly about the petrodollar and its survival worldwide... and of course about who will control both South America and the Middle East away from the Chinese and Russians. It has nothing to do whatsoever about humanitarian or democracy concerns at those places!

The silence that Simon and Garfunkel's song relates to is today all about how damn silent most of our fellow citizens are concerning what their country is doing..."

The silence that Simon and Garfunkel's song relates to is today all about how damn silent most of our fellow citizens are concerning what their country is doing. No, so long as the streets and shops are filled with everyone carrying and using those electronic gadgets to numb them from truth. So long as millions of Amerikan men stay narcotized by 24/7 sports. So long as millions of Amerikans get their news and info from the usual ' Scandal a day' mainstream media, with the asinine tweets and tweets back from this current emperor and all the other pretenders to his throne. All that matters to the half of us who actually vote is when the next election cycle appears, disregarding viable ideas and information to perhaps save our republic from the Military Industrial predators.

You walk along your neighborhood and see more and more of the flags that those predators have held hostage. Why do they hang them up on their doorways and garages? Ask them and they tell you it is to honor our troops, who are out there fighting the terrorists. And it makes this writer almost teary eyed to think how this long con has been operating for decades. Honor our troops? Well, if these fools wanted to honor our troops, they would have never  remained silent while we sent those troops  to Vietnam and all the many places they were sent to for over 50 years! There was NO Iraq War as they refer to it. No, it was the ' War ON Iraq' with the phony mantra to bring democracy there. It was the illegal occupation of said country ( after of course we destroyed most of its infrastructure and civilians) that then sacrificed thousands of our young troops. How many of those lucky enough to return home NOT in a box did return with less of their body parts or less of their right minds? Yet, the minions who remain in silence to it all keep on trucking, as the good Amerikans, good voters and of course good consumers that they are.

Silence is NOT golden... it only allows tyranny to continue.

The Dead Don’t Die: They March to War