Here's Jimmy Dore's invaluable report on this occurrence. Obviously you won't see it (at least not honestly reported) on CNN, MSNBC, Fox or the rest of the whore media. That's just not what they are there to do.

Published on 18 Oct 2018
Medea Benjamin of Code Pink hijacks the Hudson Institute's Pro Iran War presentation and spits an amazing amount of truth out while being manhandled. The smooth asshole Medea attacks, is one Brian Hook. More on this war whore below.

WHO IS THE SMOOTH CRIMINAL HOLDING FORTH AT THE PODIUM WHOM MEDEA TRIES TO "RECTIFY"? 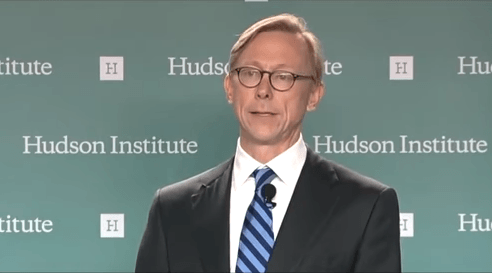 The name is Hook. Brian Hook.

THE MEN WHO MAKE THE WOUNDS: His name is Brian Hook, and though he looks on the outside harmless enough, one more rich dick in a bespoke $5,000 suit, like the corporate attorney which he technically is), he has a long rap sheet, having served under two internaitonal war criminals, George W Bush and now Trump.  His bailiwick and supposed expertise is US foreign policy, which, in real terms, means he spends much of his exceedingly well remunerated time helping to manufacture and justify imperialist wars. It figures he should be advising Mike Pompeo.  In typical Orwellian formalese, a stub from Wikipedia sums up his background thusly:
—Brian H. Hook is an American lawyer and government official. As of 2019, he serves as U.S. Special Representative for Iran and Senior Policy Advisor to Secretary of State Mike Pompeo.[1] He previously served as the Director of Policy Planning under Secretary of State Rex Tillerson.

Published on 20 Sep 2018
CODEPINK’s co-founder Medea Benjamin was forcibly escorted out of the Hudson Institute Sept. 19, after disrupting warhawk Brian Hook, U.S. Special Envoy to Iran and head of Trump’s Iran Action Group. Her protest against Hook’s belligerent speech and the administration’s harsh sanctions struck a chord with people in Iran. #PeacewithIran #Iran CODEPINK has been bombarded via email and Instagram with messages from ordinary Iranians expressing their thanks and echoing the call for peace. “The messages from Iranians keep pouring in and are so beautiful,” said Benjamin. “People in both countries want to live in peace. We have to stop the Trump administration from dragging us into another unjustified, unwinnable, catastrophic conflict.” https://www.codepink.org/disrupt_for_... #PeacewithIran #Iran