May 26, 2019
BE SURE TO PASS THESE ARTICLES TO FRIENDS AND KIN. A LOT DEPENDS ON THIS. DO YOUR PART.

The lessons of history do not register on the perennially naive American mind.  The media's manufactured reality takes care of that.

[dropcap]O[/dropcap]n this Memorial Day weekend all Amerikans should look back to the great essay written in 1935 by Marine General Smedley Butler. He named it ' War is a Racket' and it still resonates nowadays perhaps even more powerfully. His essay should be required reading for all high school American History students. General Butler acknowledged that he became a 'Gangster ' for the US corporate interests internationally. Realizing that what we call ' War' is many times just an excuse for private business interests to A) make mega bucks from our tax dollars and B) to control the resources and markets of overseas nations, all under the protection of our flag. Has anything changed? 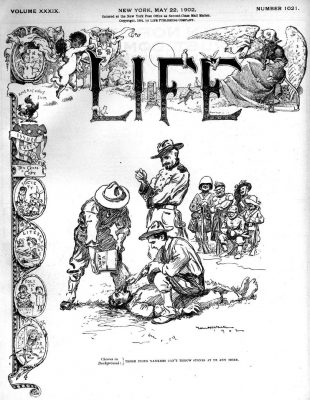 US soldiers administering the "water cure" (waterboarding) to a Filipino patriot during US-Philippines war.  Waterboardng (common in medieval Europe) was among the forms of torture used by American soldiers on Filipinos during the Philippine–American War. Theodore Roosevelt —an unrepentant imperialist—privately assured a friend that the water cure was "an old Filipino method of mild torture. Nobody was seriously damaged whereas the Filipinos had inflicted incredible tortures on our people." (LIFE magazine, 1902)

Don't you who ' know better',  as to this empire, just love it when you turn on the boob tube lately and see those Army, Marines and Navy commercials? How about the one that shows soldiers in combat, aiming their weapons and wearing similar gear to what Art Carney wore as a sewer ' denizen' on The Honeymooners? The narrator of the commercial says something to the effect of ' Warriors wanted'. The Navy has one that says : 'Around the world, around the clock, in defense of all we hold dear back home. America's Navy'. You drive in your car and see the license tags advertising one of the military branches. How about those bumper stickers saying " Proud Mom of a Marine" or " Proud Grandparent of a Marine" ... Usually right near a ' Trump 2020 ' sticker ( Some of the car owners still have their ' Bush/Cheney ' ones)? You are watching a major league baseball game on the boob tube and all the players and coaches are wearing camouflage caps and uniforms. Didn't you know that each Monday is ' Military Monday'? The worst case scenario is when you tune in to watch any major sporting event. Way before the action begins they will have a giant flag draped across the field of play. Then as the national anthem is sung a color guard appears, dressed to the tees in full uniforms and carrying another flag. Well why not? We're at War!

In this upcoming 2020 election cycle the overwhelming number of potential candidates, and of course the hypocrite Trump, stand in line to keep this obscene military spending alive and well... for whom? Not of course for the 300 million of us who cannot get the public services we need to live comfortably. How can we, when over half of our federal taxes goes to some segment of what they label Defense Spending. Oh, they con us by calling most of it Discretionary Spending. It sure as hell does NOT go to the young men and women who serve in those overseas places that we had NO business ever being in! Yet, the phonies and hypocrites, and of course the fools who buy into this lie, lower their heads and give reverence to the ' fallen heroes'. They were not heroes, in places like Vietnam all the way to the present day concerning our illegal and immoral actions in the Middle East. Rather, they are Pawns in this empire's geopolitical War Games! Yes, many of our military personnel were and are brave and stalwart... but NOT those who sent them! All those generals with the tons of fruit salad on their chests were not then ( in Vietnam ) or now considered heroes to this writer. If they had any real conscience they would have said NO to follow the pied pipers over the cliffs of reason!

The Pacification of the Philippines
What Gen. Smedley Butler was talking about

The war between the United States and the forces of the Philippine revolution began in 1899 and lasted over three years. Almost every unit of the U. S. Army served in the Philippines during the conflict, as well as a number of state and federal volunteers. Of some 125,000 Americans who fought in the Islands at one time or another, almost 4,000 died there. Of the non-Muslim Filipino population, which numbered approximately 6,700,000, at least 34,000 lost their lives as a direct result of the war, and as many as 200,000 may have died as a result of the cholera epidemic at the war’s end. The U. S. Army’s death rate in the Philippine-American War (32/1000) was the equivalent of the nation having lost over 86,000 (of roughly 2,700,000 engaged) during the Vietnam war instead of approximately 58,000 who were lost in that conflict. For the Filipinos, the loss of 34,000 lives was equivalent to the United States losing over a million people from a population of roughly 250 million, and if the cholera deaths are also attributed to the war, the equivalent death toll for the United States would be over 8,000,000. This war about which one hears so little was not a minor skirmish.

Even if the number of dead had been lower, however, the war would still rank as an important conflict for it provides an example of a significant phenomenon taking place at the dawn of the twentieth century. On the Filipino side one sees a struggling anti-imperialist movement seeking Philippine independence, as well as peasants reacting to the stress of economic change. Pitted against the Philippine revolution in the beginning was the waning power of imperial Spain, a nation that some 300 years earlier had been the strongest in Western Europe but by the end of the nineteenth century had been in a period of decline for over a century. When the United States went to war with Spain in 1898, although the issues leading to war concerned Cuba, the United States soon found itself also embroiled in the quickly moving events of the Filipino revolution. The Philippine-American War thus represents an important event in the confrontation between Western imperialism and Asian nationalism, a phenomenon that would become increasingly significant in the twentieth century. The war was also an important milestone in American overseas expansion and an example of that expansion in one of its most militant phases.
Read more