He was given the unusual gift by the Bolivian President, Evo Morales 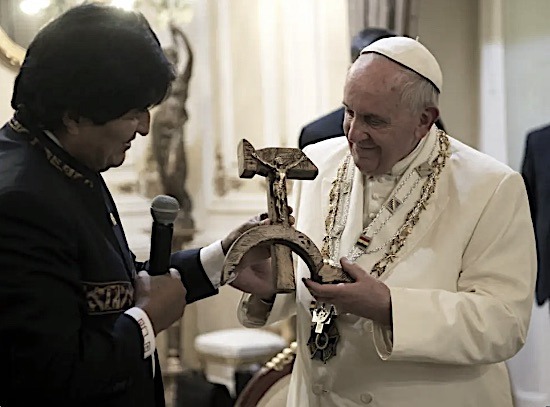 [dropcap]O[/dropcap]n a trip to South America where he declared that the world should move to a more just ecological system where riches are shared by all, the Pope has received a crucifix mounted on a wooden hammer and sickle, from Bolivian President Evo Morales.

He received the Communist crucifix while visiting La Paz in Bolivia, during his ongoing tour of South America. 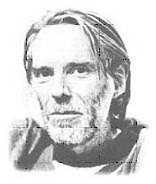 When he met the President, he was handed a wooden hammer and sickle, the symbol of Communism since the Russian Revolution.  Morales explained to Pope Francis that the cross was created by Jesuit Father Luis Espinal, who was assassinated in 1980 by paramilitaries during the short-lived dictatorship of Luis Garcia Meza.

A Vatican spokesman confirmed that it is unlikely the Communist crucifix will be displayed in a church.

After Morales' explanation, the Pope replied "I didn't know that" - although some members of the press who were present reported he said "That's not right".  It seems likely to be the former, as the Pope stopped and prayed at the site of Father Espinal’s shooting later that day.

Editor's Note:: Except for John XXIII, no Pope has ever done much for the poor, nor the socioeconomic systems which generate poverty.  Nice words, yes, action, no. The Church has been historically allied with the ruling classes everywhere since it became part of the Roman establishment about 300 A.D.  By the turn of the 20th century the Church was acutely aware of the rising popularity of socialism among the masses. To ward off this challenge to its own power and the status quo, the Vatican threw its weight behind the doctrine of "social christianity", making reference to Jesus' frequent invocations to help the poor, and his intrinsic egalitarian message. The idea was to offer the people a "socialism" devoid of its revolutionary sting, more focused on "acts of charity in ths world", than competent and organised action to change society. The movement made some inroads but eventually failed to gained sufficient adherents to stop the socialist parties advances. Ironically, a more genuine current of reformism arose in Britain in the 1850s, "Christian Socialism" (not to be confused with the aforementioned "social christians" suported by the Vatican elites) saw in Christ's teachings a clear critique of the capitalist order and the duty of Christians to do away with it. The same thinking but at a more radical organisational level infused Christian communism, aslo a form of religious communism based on Christianity. This is a theological and political theory based upon the view that the teachings of Jesus Christ absolutely compel Christians to support communism as the ideal social system. The current met with strong opposition from the Vatican but  in the late 1950s and 1960s it was to give rise to Liberation Theology [the cradle was in Peru and Colombia], and soon extended to other parts of the Third World in Africa, Asia (Philippines) and most of Latin America.  The lower ranks of the church, such as local small village priests and nuns who lived among the poor were (and remain) especially strong in their commitment to this philosophy, and have often faced brutal repression by the state with the tacit approval of the Church's higher echelons, proof that class exerts its influebce in all areas of society and institutions.
And there have been notorious reactionaries, like "the Polish Pope", John Paul II, who opposed and substantially weakened liberation theology and collaborated with Ronald Reagan in the world offensive against anticolonialist and insurgent movements in the "Third World". 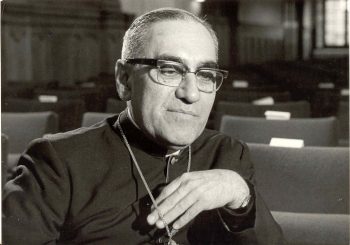 Notable exceptions occurred in Brazil (Bishop Dom Helder Camara), Nicaragua, where the revolutionary Sandinista movement had many religious figures in their ranks and leadership, and in El Salvador, a nation subject (along with much of Central America) to brutal plutocratic tyrannies supported by Washington. El Salvador has the sad distinction of counting among its religious a new Latin American saint, San Salvador Archbishop Óscar Arnulfo Romero,  assassinated on 24 March 1980 by a notorious deathsquad leader well known to the government and the American proconsul.  Pope Francis canonised Oscar Romero in 2018.  Archbishop Romero's murder, sordidly evocative of Becket's own death, many centuries ago, is unfortunately not the only religious figure rubbed out by the oligarchic states in the Third World. By now there are literally scores of martyrs which not even the Vatican media chooses to remember.—PG.

Earlier this week, during a visit to Quito, Ecuador, the Pope told a group of local leaders and indigenous people about the importance of preserving the environment, rather than exploting it for short-term profit. 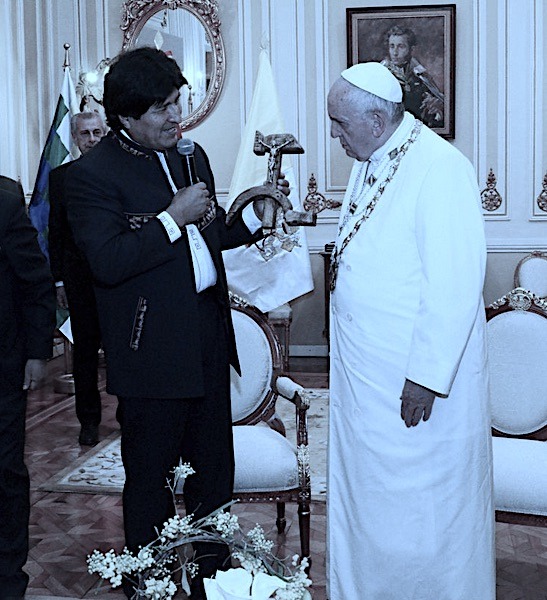 "We cannot bequeath this heritage to them without proper care for the environment, without a sense of gratuitousness born of our contemplation of the created world." 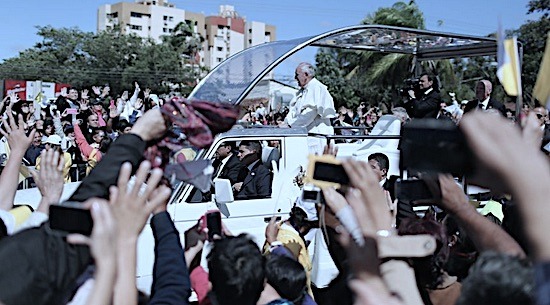 He continued: "The goods of the earth are meant for everyone, and however much someone may parade his property, it has a social mortgage... the tapping of natural resources, which are so abundant in Ecuador, must not be concerned with short-term benefits."

Thousands of people, like these crowds in Santa Cruz, Bolivia, have flocked to see the pope during his South American tour

Pope Francis is widely known for his opposition to poverty, and before he was Pope, took care to distance himself from Marxist ideology while still calling for more economic equality and fairer distribution of wealth.

While it appears that Pope Francis appreciated the gift, Vatican spokesman Father Lombardi said: "Certainly, though, it will not be put in a church."

The Pope, as the first pontiff to come from South America, has received a very warm welcome on all stops of his current South American tour.

Due to Pope Francis losing part of one lung as a young man, he could only stay in La Paz, which is 3,650 metres above sea level, for a few hours, before the thin air meant he had to move on to lower areas of the country.

ABOUT THE AUTHOR
Doug Bolton is a reporter with The Independent, a publication in the United Kingdom with international bureaus in the Americas and other important zones.

IT IS INDIFFERENCE OF THE ISRAELIS THAT IS KILLING PEOPLE

With an Eye on Regime Change in Iran, the US Escalates Tensions