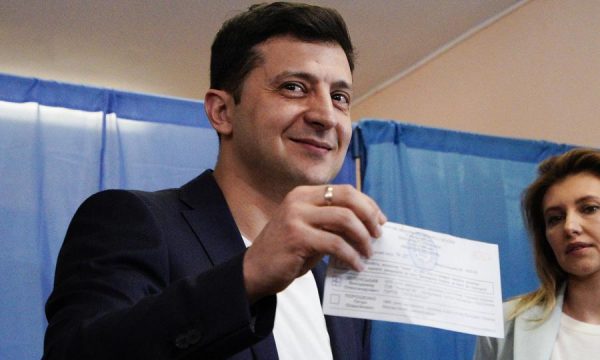 Volodymyr Zelensky after victory on April 21, 2019.  His political DNA is still a bit blurry, but the signs are not entirely hostile toward Russia. (Asia Times)

The Obama-era geopolitics of the West goose-stepping to erect an iron curtain between Kiev and Moscow is no longer there.

Once you have scrambled the eggs, you’d better learn to like scrambled eggs. There are lessons learned and the behavior has changed. Resolving the Ukraine crisis poses such a predicament.

However, in life everything is possible. With the election of Volodymyr Zelenskiy as the new president in Ukraine, things have become somewhat easier for Moscow and Kiev to recapture a past that can never quite be the same again.

With 20/20 hindsight, Moscow was quietly pleased with the outcome of the Ukraine elections on April 21, which catapulted Zelenskiy to power with an overwhelming mandate of 73% of the votes. There were significant undercurrents.

Although none of the candidates campaigned for a Ukraine-Russia rapprochement or could be regarded as pro-Russia, the sharp divide in Ukrainian politics between the ‘pro’ and ‘anti-Russian’ camps had become blurred. A sort of mellowing of attitudes ensued.

The ‘pro-Russian’ candidates Yuriy Bykov and Oleksander Vilkul together secured 17% of the votes in the first round. In the run-off, Zelenskiy not only garnered these votes, but received his strongest support from the pro-Russian south and southeastern regions, which also registered the highest voter turnout.

Zelenskiy assiduously wooed the pro-Russian voters by using the Russian language to make direct appeals and by distancing himself from his predecessor Petro Poroshenko’s ‘Ukrainiasation’ policies.

Zelenskiy’s victory signifies the empowerment of the regions that traditionally backed pro-Russian political forces. Donbas did not take part in the election. The most recent opinion polls suggest that this trend will continue in the forthcoming parliamentary election and the pro-Russian opposition bloc may emerge as the second biggest faction in the new parliament.

Moscow is pinning its hopes on a dynamic situation. Valentina Matviyenko, the influential Kremlin politician and speaker of the upper house of the Russian parliament, told Tass on May 28 that Moscow was prepared to develop contacts with the new Ukrainian parliament.

She said: “We are ready for contacts, but without the policy of dictating, without any artificial, unnecessary conditions. Let’s start from scratch, analyze the current state of affairs and how we can remedy the situation and move ahead together. We are open to and ready for dialogue … and we are ready to work to restore and normalize Russian-Ukrainian relations.”

Of course, a new parliament purged of the ghosts of Euro-Maidan may be too much to expect, but there are ways of moving forward. Zelenskiy’s aides have hinted at a national referendum. Moscow welcomes the idea.

The cautious optimism in Moscow can be attributed to Zelenskiy’s words and actions after the election – apart from any back channels at work.

Ukrainian nationalism is riding high and Zelenskiy’s grip on the power calculus in Kiev is nebulous, and he must cautiously move forward. Yet, in his inaugural speech on May 20, Zelenskiy prioritized the Donbas question. He has since replaced the chief of the general staff of the armed forces and, interestingly, the state investigation bureau opened a criminal case to investigate possible high treason charges against Poroshenko over the incident in the Kerch Strait last November.

The charges are that “Poroshenko’s actions were aimed at deliberately provoking the Russian Federation for retaliatory and easily foreseen aggressive actions in a tense situation.”

Last week, Zelenskiy telephoned German Chancellor Angela Merkel to discuss Donbas. This followed a phone conversation between Merkel and the presidents of France and Russia.

The ice is melting

A readout in Kiev said Merkel and Zelenskiy “reaffirmed their mutual interest in intensifying efforts to restore peace in Donbas, including efforts in the Normandy format. The sides also agreed on the first joint steps in this direction.”

The ice is melting. A summit meeting in the Normandy format – Germany, France, Russia and Ukraine – cannot be ruled out.

A ceasefire in Donbas is Zelenskiy’s key priority, but Moscow would encourage him – with Berlin and Paris nudging him – to also address the vexed issues of direct dialogue between Kiev and the separatist regions of Donbas and Lugansk, special status for Donbas, holding local elections, amnesties for prisoners, the restoration of social and economic ties and so on, as provided under the Minsk Agreement.

Russia is ready to facilitate intra-Ukrainian dialogue. Moscow’s strategic goal is the reintegration of Donbas with Ukraine, which will help it to reclaim influence in Kiev and leverage Ukraine’s Euro-Atlantic integration.

Zelenskiy too is conscious that a significant majority of Ukrainians are positively or very positively inclined toward Russia and, therefore, a reset in ties with Russia will decisively contribute to the Donbas conflict resolution process.

Meanwhile, the external environment is no longer hostile. President Trump takes a detached view of Ukraine and is disinterested in Barack Obama’s regime change project to isolate Russia.

Besides, it lately emerged that Poroshenko connived with Hillary Clinton and the Democratic National Convention’s covert operation to collect sleaze on Trump.

Also, Joe Biden’s involvement in Ukraine as US vice-president has been raked up, highlighting the conflict of interests over his son’s links with a Ukrainian energy company.

Trump will only have selective use for Ukraine in the period leading up to the 2020 US election. That gives respite to Moscow to establish a dialog with Zelenskiy. Whatever Zelenskiy might be, he is not a western creation.

This is where the loosening up of trans-Atlantic ties between the US and its European allies, the disarray in the UK over Brexit, Ukraine’s reputation as a cesspool of corruption and venality, etc come into play.

The Obama-era geopolitics of the West moving in goose steps to erect an iron curtain between Kiev and Moscow is simply not there anymore.

Fatigue has set in. Neither the European Union nor NATO is in a position to grant membership to Ukraine in the foreseeable future. So, any strategy to counter creeping Russian influence in Kiev can only be an act of motiveless malignity toward Russia and its legitimate interests vis-a-vis its closest and dearest western neighbor, with which it has profound civilizational, historical, strategic, economic and cultural ties.

A native Russian speaker, Zelenskiy has been accused by critics of having adopted a soft stance toward Russia’s annexation of Crimea. Shortly after Russia annexed Crimea in March 2014, Zelenskiy said he was open to touring the Black Sea peninsula with his comedy troupe, but wouldn’t vacation there “as long as there are armed people.”

He later added: “I really want to address Mr Putin. Dear Vladimir Vladimirovich! Do not allow even the hint of a military conflict to happen. Because Russia and Ukraine really are brotherly nations … If you want, I can beg you on my knees. But please, do not put our people on their knees.”

The conventional wisdom is that unscrambling the Ukraine omelet is impossible. Indeed, the politics around Crimea is problematic. But human ingenuity is infinite.

The Ukraine question can be broken into two sub-zones: the yolk and the white. If the yolk (Donbas) is the core, the white (Crimea) is the periphery. And once this happens, the yolk and white are free to float.

Rand Corporation: How to Destroy Russia

Unintended Consequences: Did Trump Just Give the Middle...

Veteran Speaks At “No War On Iran” Rally...

How Arabization changed Islam in Asia