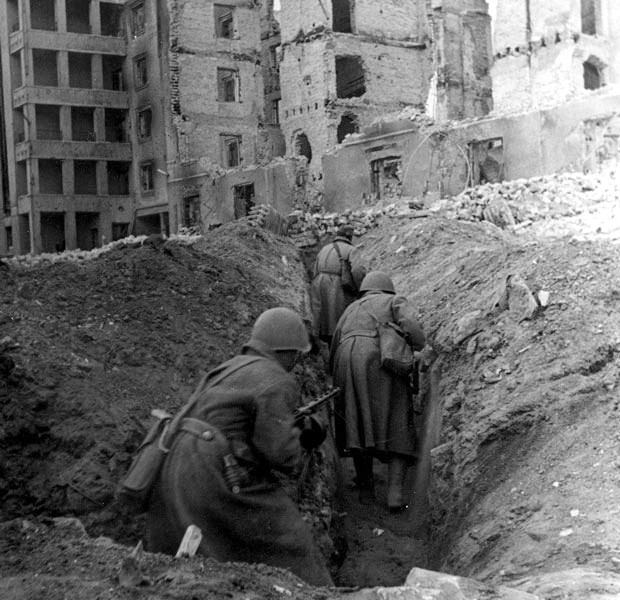 Editor's Note: D-Day was celebrated yesterday in France's Normandy beaches in what can only be described as a ludicrous and self-indulgent feast of Anglo-American narcissism, not to mention grotesque historical falsification.  President Trump, British Prime Minister Theresa May, and French President Emmanuel Macron made absolutely no mention this week in their commemorations of D-Day of the central and key role the Soviet Union played in the defeat of Nazism.  There is no arguing with the fact that D-Day was important and that American and British troops fought and died bravely, but D-Day was not a turning point when compared to major battles between Hitler’s troops and Soviet forces on the Eastern Front. This is an indisputable fact. D-Day, despite pervasive Anglo-American propaganda, wasn't the primary decisive engagement of that war. That honor belongs   to Stalingrad, where, in the winter of 1942-43, and at staggering cost, Soviet armies broke the back of the Nazi war machine, followed by Kursk, the biggest tank battle in history involving more than 6,000 tanks, 4,000 aircraft and over 2 million men. All told, with a country in ruins, but held by an unconquerable spirit, the Russian people invested 27 million lives (civilian and military) in defeating Germany, a figure that easily dwarves the much ballyhooed losses suffered by the British (450,000), French (567,000) and American  (418,000), participants, the latter suffering the largest proportion of that figure in their push against Japan. In fact, a number of smaller nations absorbed far more dramatic losses, i.e., Poland (5,600,000), Yugoslavia (1,000,000).  Thus, if the Soviet Union easily emerges as the biggest victim of World War 2, in the Asian theater, where WW2 had begun not in 1939 but in 1937, when Japan attacked China, it is the latter that stands out for the sheer dimension of bloodletting. The People's Republic of China as of 2005 estimated the number of Chinese casualties in the Second Sino-Japanese War from 1937 to 1945 are 20 million dead and 15 million wounded.

Elementary decency, which Western elites totaly lack, would have dictated not only due mention of Russian sacrifice, but an invitation for the Russians to attend the ceremonies, since D-Day would have been impossible, or a veritable bloodbath for the allies, without the Soviet victories in Stalingrad and Kursk a year before. In this context, I am gratified that Paul Craig Roberts saw the matter in the same light, expressing repugnance at the blatant erasure of history in order to maintain the artificial russophobia required to justify the manufacturing of further sanguinary and unthinkable wars. Speaking of "unthinkable," this note would be incomplete if we failed to remind our audience of Operation Unthinkable, an abominable plan concocted by Winston Churchill, that paragon of British fortitude and supposed sterling qualities (or so the propaganda goes), who apparently thought nothing of prolonging Wold War 2, and betraying Britain's ally. Even the heavily CIA-redacted Wikipedia still maintains a page on this embarrassing, but hardly known topic:

Operation Unthinkable was a code name of two related, unrealised plans by the Western Allies against the Soviet Union. They were ordered by British prime minister Winston Churchill in 1945 and developed by the British Armed Forces' Joint Planning Staff at the end of World War II in Europe.

The first of the two assumed a surprise attack on the Soviet forces stationed in Germany in order to "impose the will of the Western Allies" on the Soviets. "The will" was qualified as "square deal for Poland"[1] (which probably meant enforcing the recently signed Yalta Agreement[citation needed]). When the odds were judged "fanciful", the original plan was abandoned. The code name was used instead for a defensive scenario, in which the British were to defend against a Soviet drive towards the North Sea and the Atlantic following the withdrawal of the American forces from the continent.

The study became the first Cold War-era contingency plan for war with the Soviet Union.[2]Both plans were highly secret at the time of their creation and it was not until 1998 that they were made public,[3] although the British spy for the Soviets, Guy Burgess, had passed on some details at the time.[citation needed] (Wikipedia, Operation Unthinkable)

Since that time, Western standards of morality have tumbled even further, culminating in the horrid sociopathic chaos we inhabit today.  Meanwhile, as imperial propaganda never rests, the New York Times found in Trump's cloying speech at Colville-sur-mer grounds to lambaste him for "honoring D-Day sacrifices with some legacies unspoken".  Even today in a climate saturated with cynical lies and suffering from the toxic effects of the Russiagate hoax, which the Times has done so much to legitimate, one would be forgiven for thinking this article was referring to Trump's failure to mention the Russian contribution to the war effort. But no, the Times, as prominent mouthpiece for the US Deep State, was and remains fixated on bolstering the misnomered "Atlantic Alliance", vital to US imperialism's ability to operate in all latitudes. Describing Trump's customary deficits in truly Orwellian terms, the Times took the opportunity to defend NATO as an engine for peace, while putting in a good word for the bloodsoaked and by now wholly oxymoronic "postwar international order."

“To the men who sit behind me and to the boys who rest in the field before me,” Mr. Trump said, “your example will never, ever grow old, your legend will never tire, your spirit — brave, unyielding and true — will never die.”

There was a lingering incongruity to Mr. Trump’s words: a president who has denigrated the European Union and accused NATO of exploiting American taxpayers was extolling an allied military campaign that was perhaps the greatest demonstration of America’s commitment to a free and peaceful Europe.

It fell to President Emmanuel Macron of France to defend the postwar international order. Speaking before Mr. Trump, he offered thanks to the United States for its wartime sacrifice and conferred the French Legion of Honor on several veterans. Then he paid tribute to the institutions the United States helped create.

“We must show ourselves worthy of the heritage of peace you left us,” Mr. Macron said, pointing to the treaty that created NATO. “That is what the leaders of Europe did in creating the European Union.”  (Trump Honors D-Day Sacrifices, With Some Legacies Unspoken) 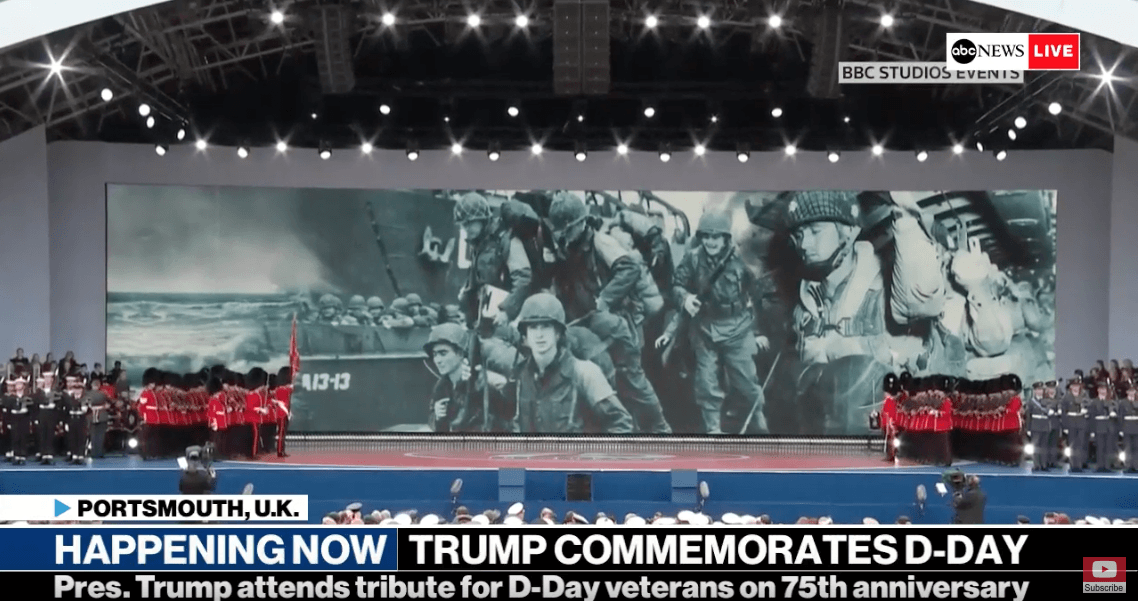 Today is the 75th anniversary of the Normandy invasion.  Once again the event is celebrated by demonization of National Socialist Germany and glorification of America’s greatness in winning the war.

In actual fact the Normandy invasion was not a significant contributor to Germany’s defeat.  A small US/British/Canadian/French force of about 150,000 soldiers of which about 73,000 were American faced a few German divisions at half strength and short of fuel and ammo.  The real war was on the Eastern front where millions of soldiers had been fighting for several years.

The Red Army won World War II.  The cost to the Soviets was between 9 million and 11 million military deaths.  Adding in the Russian civilian deaths, the Soviet Union won the war at the cost of between 22 million and 27 million Soviet lives.

In contrast the US had 405,000 soldiers killed during WW II of which 111,600 died fighting the Japanese in the Pacific.

The falsification of history applies to World War II just as it does to everything else in the West, and President Trump’s D-Day speech exemplifies how false our history is.  Russia is simply left out of the story.  Putin was not even invited to the celebration.  The celebrants consisted of outgoing British prime minister May, failed French president Macron, and outgoing German chancellor Merkel who was there to celebrate her own country’s defeat, but they might as well not have been present.  Trump made the occasion America’s greatness.  We defeated Germany at a cost of less than 300,000 soldiers killed.  The Russians who lost 36 times more soldiers are not considered to be sufficiently important to the victory over Germany to be invited to the celebration.  (Source: Paul Craig Roberts, Personal site) 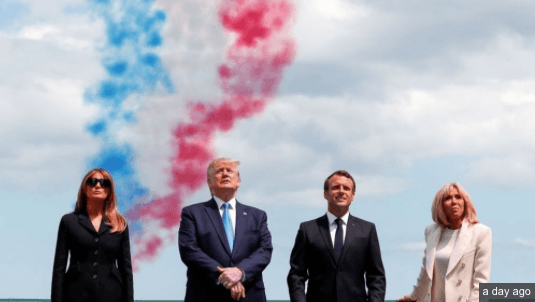 Trump and an obsequious Macron, who, to France's shame, allowed D-Day to become "an American show" filled with sanctimonious propaganda. (TGP screengrab from TIME magazine video)

About the author(s)
Paul Craig Roberts is a former Assistant Secretary of the US Treasury and Associate Editor of the Wall Street Journal. Roberts’ How the Economy Was Lost is now available from CounterPunch in electronic format. His latest book is The Neoconservative Threat to World Order.  • Patrice Greanville is founder and editor in chief of The Greanville Post.

The global war on journalism