The Murdering of Julian Assange 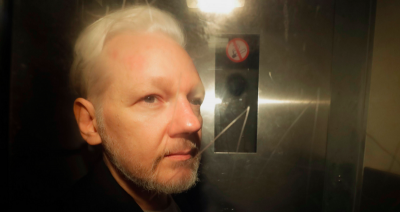 Julian Assange is being slowly murdered by “Her Majesty’s Prison Service” at Belmarsh prison in the south-east of London. The prison is notorious for holding people who have never been charged with a crime indefinitely. It is also called the British version of Guantanamo, and, typically used to detain so-called terrorists, thus called by the British police and secret service and aped by the British MSM and establishment. Terrorists that become terrorists by continuous and repeated accusations, by media propaganda, but not necessarily by fact.

Remember, if a lie is repeated often enough it becomes the truth in the minds of the braindead listeners. Its indoctrination of the public to demonize somebody or a group of people, or a country, who could become dangerous for the empire’s vicious and criminal endeavors. That’s what they are doing with Julian Assange. Exactly the same principle is applied, though on a different scale, against President Putin and against Russia and China. And it seems to work in a brainwashed-to-the-core, western society, ran by their spineless European US-vassalic leadership.

Yes, what is happening to Julian Assange could happen to any journalist who reveals the inconvenient truth about the empire and its minions’ criminal machinations, any journalist – or non-journalist, whistleblower, for that matter – anyone who dares standing up to the AngloZionist atrocities may end up in Guantanamo or Belmarsh which is considered a Type A prison for adult men, meaning, a “serious” prison, where “dangerous” detainees are held for as long as Her Majesty’s Prison Service considers necessary, and prisoners treatments are held secret and include torture.

Julian Assange’s case goes even farther than breaking all the rules of “democratic” free speech. The way he is treated is a serious infraction on Human Rights. The US and British governments intend to silence and punish a champion of free speech, torturing him for the world to see, and especially as a deterrent for would-be whistleblowers and other free-speech advocates.

Julian Assange has been condemned to a ‘temporary’ prison sentence of 50 weeks for jumping bail, when he sought and was granted refuge in 2012 in the Ecuadorian Embassy. And why did he jump bail? Because he was about to be extradited to neofascist Sweden, who acting in the name of Washington, accused him with phony rape and sexual misconduct charges, from where he would have most likely been extradited to the US – where he might have faced a kangaroo court and a fake trial with possible death sentence, or indefinite incarceration at Guantanamo.

That’s why he jumped bail and why he escaped to the Ecuadorian Embassy, because western injustice was already then played out with false propaganda, for everyone, but the blind and indoctrinated, to see. Rafael Correa, then President of Ecuador, saw the truth behind it all and granted Julian asylum, and later gave him Ecuadorian citizenship – which in 2018 was revoked by Correa’s traitor and fascist successor, US-implant, Lenin Moreno, who, as a reward, it is said, got an IMF loan of US$ 4.2 billion to help the government carry out its neoliberal economic reform program, meaning undoing much of the social programs of improving economic equality for the Ecuadorian population, implemented during the Correa presidency.

Well, how sick can that be? – Unfortunately, acting pathologically or even psychopathically in today’s world is fully accepted. It’s the new normal. This means, we are living in an almost-terminally ill, corrupt and utterly brainwashed society – to be precise, western society. “Almost-terminally” means that there is only dim hope of healing for the utter lack of conscientiousness of western society. Hope of western people’s awakening is fading, as it is sliding ever deeper into a bottomless abyss.

Julian Assange was first accused by Washington of fake charges of computer hacking and conspiring to defraud the United States. In fact, what this is all about is the 2010 publication by Wikileaks of the infamous video that circulated the world a million times, depicting the purposeful, malicious ‘collateral killing’ of harmless civilians by the crew of a US Army helicopter – and of other data of atrocious acts of the US military revealed by Chelsea Manning, and published by Wikileaks. Chelsea Manning has been and is herself serving prison sentences.

Despite the fact that this little video has been seen around the world probably by more than a billion people, nobody went on the barricades – on an endless mass-demonstration – to stop the rogue-state and killing machine United States of America from committing its daily and deadly crimes. Nobody. And the killing goes on. And Washington is doing its utmost to silence every future revealing of their atrocities, by silencing Julian Assange, and intimidating any potential future truth-revealer.

They have now 50 weeks, while he is hidden away in a British Guantanamo-like prison, to slowly kill him on behalf of and as a little favor to Washington, so he doesn’t have to be extradited and the US is spared being exposed to the kangaroo trial that Julian would otherwise receive. If he dies a “natural” death in a British prison, Trump may wash his bloody hands in innocence, and those in Congress who want to send a CIA squadron to murder Assange – I kid you not they are not ashamed to openly say so – will also be able to whitewash their criminal and bloody minds. Nobody will ever know what really happened behind Her Majesty’s prison walls.  – There will be some flareups in the media – and then all quiets down. As usual. The Wikileaks founder will be gone – and all potential whistleblowers and truth-seeking journalists will be on their guard. Objective achieved.

In the meantime and to reach that objective, Julian is most likely being tortured, possibly physically and psychologically.  Julian Assange has suffered “prolonged exposure to psychological torture”, the UN’s torture expert, Nils Melzer, said in a BBC interview, and urged Britain not to extradite Assange to Washington. According to retired USAF lieutenant colonel Karen Kwiatkowski, he may have been doped with psychotropic drugs, like 3-quinuclidinyl benzilate, known as BZ that produces hallucinations, mental confusion and memory loss. This may have been the reason, why he was unable to speak clearly, and to participate in a Swedish Court hearing – and had to be transferred to the hospital wing of Her Majesty’s Belmarsh prison. One of the few pictures that emerged at the time of his transfer to the hospital was one of a zombie.

Let’s just hope that I‘m totally wrong with this scenario – and that people’s pressure (at this point it would be a miracle) will pry Julian loose from the lethal fangs of the empire and its minions.

The Western world keeps looking on – worse, they even support Her Majesty’s Prison Service, to which Julian Assange is subjected. They largely applauded the brutal British arrest of Julian Assange, when the police dragged him out of the Ecuadorian Embassy into a van and off to preventive custody, and hours later he was convicted to 50 weeks on a phony charge for jumping bail.

What can be said – is not better said than by Paul Craig Roberts,

“If the world stands for the US / UK / Swedish judicial murder of an innocent man, the world does not deserve to exist another second.” – Amen.

Featured image is from Medium