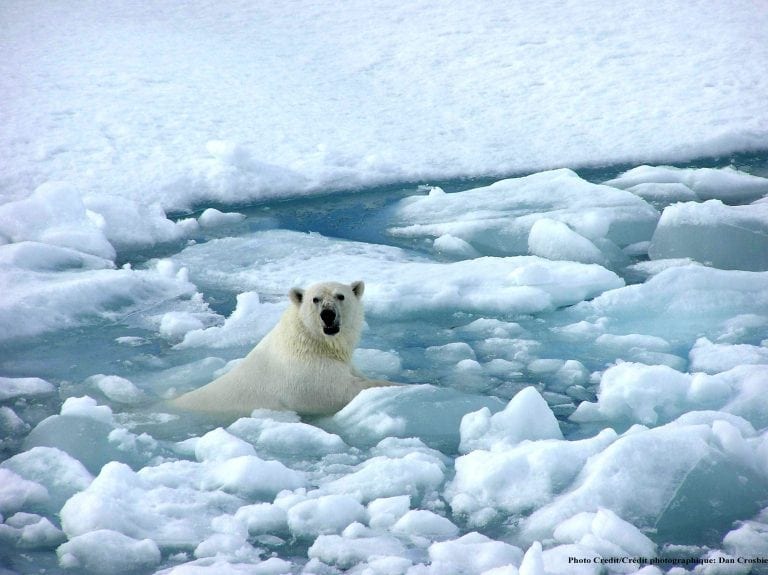 Polar bears: in the frontline of  ecoanimal collapse.

Simply put the capitalist way of life must be obliterated as soon as possible if humanity (and its dependent species and ecosystems) are to survive.

Immediate action is needed to save the future

The central problem which the world faces in its attempts to avoid catastrophic climate change is a contrast of time scales. In order to save human civilization and the biosphere from the most disastrous effects of climate change, we need to act immediately. But it is difficult to mobilize public opinion behind urgently needed action because the most severe effects of global warming belong to the long-term future.

However, the Intergovernmental Panel on Climate Change, in their October 2018 report, used strong enough language to wake up at least part of the public: the children whose future is at stake. Here is an excerpt from a speech which 16-year-old Swedish climate activist Greta Thunberg made at the Davos Economic Forum in January, 2019:

“Our house is on fire. I am here to say our house is on fire. According to the IPCC we are less than 12 years away from not being able to undo our mistakes. In that time, unprecedented changes in all aspects of society need to have taken place, including a reduction of our CO2 emissions by at least 50%...

“Here in Davos – just like everywhere else – everyone is talking about money. It seems that money and growth are our main concerns.

“And since the climate crisis has never once been treated as a crisis, people are simply not aware of the full consequences on our everyday life. People are not aware that there is such a thing as a carbon budget, and how incredibly small that remaining carbon budget is. That needs to change today...”

Money drives the mania of growth

“Anyone who believes in the indefinite growth of anything physical on a physically finite planet, is either mad or an economist.” Kenneth E. Boulding, (1910-1993).

Economists (with a few notable exceptions) have long behaved as though growth were synonymous with economic health. If the gross national product of a country increases steadily by 4 percent per year, most economists express approval and say that the economy is healthy. If the economy could be made to grow still faster (they maintain), it would be still more healthy. If the growth rate should fall, economic illness would be diagnosed. However, it is obvious that on a finite earth, neither population growth nor economic growth can continue indefinitely.

Undoubtedly even the most growth-crazed economists realize that endless growth on a finite planet is a logical impossibility. But with self-imposed short-sightedness they refuse to look more than a decade or two into the future. All this has been changed by the climate crisis, since saving the long-term future for our children and grandchildren is now the most urgent of our tasks. The long-term future of human civilization and the biosphere must now be given our highest priority.

Our entire economic system must be reformed

Old ideas and old economic indicators can no longer serve us. Seen from an ecological perspective, the gross national product of a country does not indicate how well the economy is doing, but almost the reverse. GNP has become a measure of how fast an economy is destroying the environment.

Lifestyle change but not unhappiness

The highly successful social and economic systems of the Scandinavian countries, together with their excellent renewable energy policies, demonstrate that the climate emergency can be addressed while simultaneously reducing economic inequality and providing needed services such as free medical care, social security, and free higher education.

We can afford the Green New Deal

The Green New Deal concept, which is currently advocated in the United States and many other countries, aims at simultaneously addressing the climate emergency and socio-economic issues. It advocates massive governmental action to create renewable energy infrastructure, simultaneously addressing unemployment through new green jobs. Critics say “Ww can't afford it.” They are wrong. What we cannot afford is inaction, since the entire future of human civilization and the biosphere is at stake.

We can easily finance the Green New Deal by making deep cuts in military spemding, which currently costs the world $1.8 trillion per year, and by raising taxes on super-rich individuals and corporations. Most voters are in favor of greater economic equality, and a safe long-term future for their grandchildren. We owe it to future generations to act now!

A new book on the climate crisis

I have just completed a new book entitled “Money, Media and the Climate Crisis”, which discusses the climate emergency from the standpoint of economics. It makes some use of my previous publications on the climate emergency, but consists mainly of new material. I urge readers to download the book from the following link, and to circulate the link to their friends who might be interested:

If printed copies are desired, they can be obtained from:

Other books and articles on global problems can be downloaded from:

ABOUT THE AUTHOR
John Scales Avery is a theoretical chemist noted for his research publications in quantum chemistry, thermodynamics, evolution, and history of science. Since the early 1990s, Avery has been an active World peace activist. Wikipedia

PANDA DIPLOMACY MUCH BETTER THAN MAFIA EXTORTION OF COLLAPSING WEST

The Gulf of Credibility