Home Uncategorized Starvation Sanctions Are Worse Than Overt Warfare

Starvation Sanctions Are Worse Than Overt Warfare 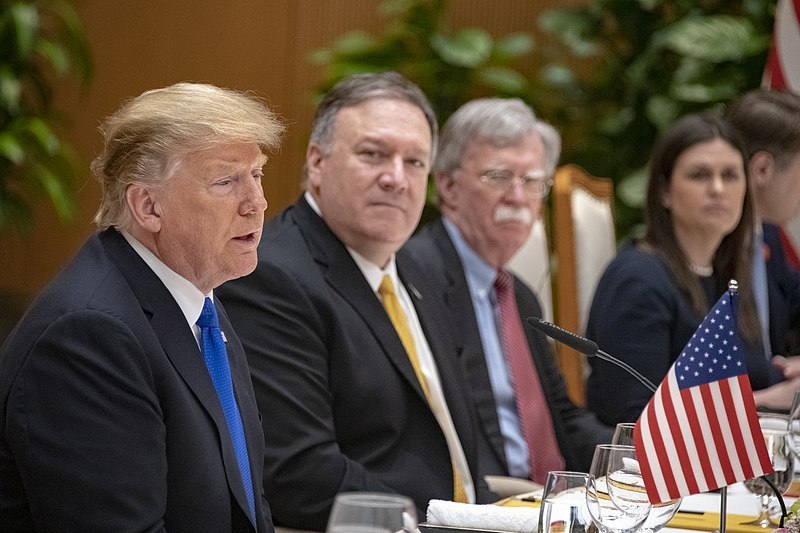 “We are putting major additional Sanctions on Iran on Monday,” President Trump tweeted today. “I look forward to the day that Sanctions come off Iran, and they become a productive and prosperous nation again – The sooner the better!”

Iran’s economy is already floundering due to the steadily mounting sanctions that the Trump administration has been heaping upon it since its withdrawal from the JCPOA last year. Crucial goods are four times the price they used to be, sick Iranians are having difficulty obtaining life-saving medicine, and life in general has been getting much more difficult for the poorest and frailest Iranian civilians.

For this reason, it is a very safe bet that there have been Iranians who have died because of the sanctions. Being unable to obtain enough life-saving medicine will inevitably increase mortality rates, as will inadequate nutrition and care for those whose health is at risk. There’s not really any way around that, and it’s only going to get worse.

And that’s exactly what was supposed to happen. As far as their intended purpose is concerned, the sanctions are working. They’re doing exactly what they were intended to do: hurt Iranian civilians.

How do I know this? Well for one thing America’s Secretary of State has said it openly. The New York Times reports the following:

Last week, Mr. Pompeo acknowledged to Michael J. Morrell, a former acting director of the C.I.A., that the administration’s strategy would not persuade Iranian leaders to change their behavior.

“I think what can change is the people can change the government,” he said on a podcast hosted by Mr. Morrell, in what appeared to be an endorsement of regime change.

The Trump administration isn’t leveling these sanctions because it believes they’ll cause Tehran to capitulate to Washington’s impossible list of demands; they know full well that that will never happen. What they claim, based on no evidence or historical precedent whatsoever, is that by making life so painful for the hungry and malnourished Iranian people they’ll be forced to rise up against their government to effect regime change themselves.

Can you think of anything more sociopathic than this? Off the top of my head, I personally cannot.

President Obama made a desperate and terrible deal with Iran - Gave them 150 Billion Dollars plus I.8 Billion Dollars in CASH! Iran was in big trouble and he bailed them out. Gave them a free path to Nuclear Weapons, and SOON. Instead of saying thank you, Iran yelled.....

Starvation sanctions kill people. Tens of thousands of Venezuelans have reportedly already died as a result of this administration’s relentless assault on their economy; those human beings are no less dead than they would have been if the US had killed them by dropping cluster bombs on Caracas. Yet these deaths have received virtually no mainstream media coverage, and Americans, while they strongly oppose attacking Iran militarily, have had very little to say about Trump’s attacks on the nation’s economy. The economy which people use to feed their children, to care for their elderly and their sick.

I’m titling this essay “Starvation Sanctions Are Worse Than Overt Warfare”, and I mean it. I am not saying that starvation sanctions are more destructive or deadly than overt military force in and of themselves; what I am saying is that the overall effect is worse, because there’s no public accountability for them and because they deliberately target civilians.

If the US were to launch a barrage of Tomahawk missiles into an Iranian suburb with the goal of killing civilians, there’d be international outrage and the cohesion of the US-centralized power alliance would take a major hit. Virtually everyone would recognize this as an unforgivable war crime. Yet America will be able to kill the same number of civilians with the same deliberate intention of inflicting deadly force, and it would suffer essentially no consequences at all. There’s no public or international pressure holding that form of violence at bay, because it’s invisible and poorly understood.

It reminds me of the way financial abuse gets overlooked and under-appreciated in our society. Financial abuse can be more painful and imprisoning than physical or psychological abuse (and I speak from experience), especially if you have children, yet you don’t generally see movies and TV shows getting made about it. In a society where people have been made to depend on money for survival, limiting or cutting off their access to it is the same as any other violent attack upon their personal sovereignty, and can easily be just as destructive. But as a society we haven’t yet learned to see and understand this violence, so it doesn’t attract interest and attention. That lack of interest and attention enables the empire to launch deadly campaigns targeting civilian populations unnoticed, without any public accountability.

What does is say about MSM that Fox News is the only MSM outlet to have covered the @ceprdc study showing that US sanctions have killed 40,000 Venezuelans? NYT, WaPo, MSNBC and CNN have all ignored it and promoted murderous sanctions and regime change. https://t.co/RLqfaIK166

It’s great that more people are starting to understand the cost of war, to the extent that we’re even seeing US presidential candidates make opposing it central to their platforms, but this is happening at a time when overt warfare is becoming more obsolete and replaced with something subtler and more sinister. We must as a society evolve our understanding of what starvation sanctions are and what they do, and stop seeing them as in any way superior or preferable to overt warfare.

The fact that people generally oppose senseless military violence but are unable to see and comprehend a slow, boa constrictor-like act of slaughter via economic strangulation is why these siege warfare tactics have become the weapon of choice for the US-centralized empire. It is a more gradual way of murdering people than overt warfare, but when you control all the resources and have an underlying power structure which maintains itself amid the comings and goings of your officially elected government, you’re in no hurry. The absence of any public accountability makes the need for patience a very worthwhile trade-off.

So you see this siege warfare strategy employed everywhere by the US-centralized empire:

The US-centralized power alliance is so powerful in its ability to hurt nations with financial influence that in 1990 when Yemen voted against a UN Security Council Resolution authorizing the attack against Iran, a senior US diplomat was caught on a hot mic telling the Yemeni ambassador, “That will be the most expensive ‘no’ vote you ever cast.” According to German author Thomas Pogge, “The US stopped $70 million in aid to Yemen; other Western countries, the IMF, and World Bank followed suit. Saudi Arabia expelled some 800,000 Yemeni workers, many of whom had lived there for years and were sending urgently needed money to their families.”

It’s no wonder, then, that the drivers of this empire work so hard to continue growing and expanding it. The oligarchs and their allies in opaque government agencies no doubt envision a world where all noncompliant nations like Iran, Russia and China have been absorbed into the blob of empire and war becomes obsolete, not because anyone has become any less violent, but because their economic control will be so complete that they can obliterate entire populations just by cutting them off from the world economy whenever any of them become disobedient.

This is the only reason Iran is being targeted right now. That’s why you’ll never hear a factually and logically sound argument defending Trump’s withdrawal from the nuclear deal; there is none. There was no problem with the JCPOA other than the fact that it barred America from inflicting economic warfare upon Iran, which it needed for the purpose of toppling the nation’s government so that it can be absorbed into the blob of the US-centralized empire.

And all the innocent human beings who die of starvation and disease? They don’t matter. Imperial violence only matters if there are consequences for it. The price of shoring up the total hegemony of the empire will have been worth it.

As Trump Wants To Avoid A Shooting War, Iran Will Use Other Means To Pressure Him

Germany vs. Iran – Has Germany Sold Out to the Devil?