Latest stunt shows that Hollywood is packed with folks afflicted by the Trump Derangement Syndrome, not to mention runaway omphaloskepsis 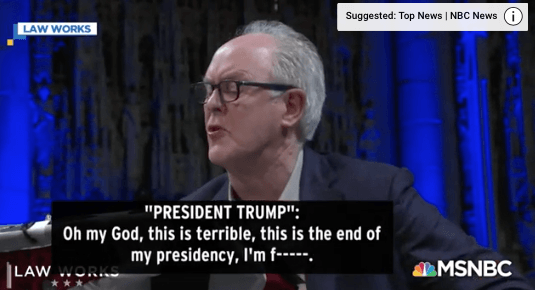 John Lithgow as Trump in this pathetic effort to reinject life into a deservedly dead horse.

Democrat-instilled Groupthink in an industry where sanctimonious peer pressure is enormous, and cowardice and opportunism an epidemic, is showing its ugly head again, as a bunch of otherwise distinguished actors prove that acting brilliantly on the sound stage and being a political nincompoop can easily coexist in the same body.

With Trump menacing Iran with "obliteration", with North Korea still very much on the empire's crosshairs, these liberals still do not see the obligation to tackle Trump from the left, opposing with resolve his push to war and international economic blackmail—euphemistically described as "sanctions"—all underscored by crude imperialist threats across the globe. They can't and won't oppose Trump and his criminal policies because the Democrats —bought lock, stock and barrel by Wall Street and the MIC, and supine servants of Israel, as is the GOP—are also ruthless imperialists, albeit of the more "elegant" less blatant kind, a type of political fraudulence Obama excelled in.

As we have witnessed on numerous occasions, in these liberals' bubble of privilege urgent priorities are forever non-existent or on the back burner. Apparently World War 3, and the continued decimation of entire nations and regions, and Trump's continued betrayals of the environment and the working class, is just fine by these pampered idiots. Certainly, tediously stoking the fires of Russiagate—a dishonest and dangerous oxygen-sucking CIA psyop endorsed by the Democrat big wigs, with whom these celebrities cheerfully hobnob— is no way to de-escalate international tensions, something the planet desperately needs. They should know that much, but obviously they don't, or pretend not to know it, which ends up being the same. Pathetic people.
—PG

Hollywood stars the likes of John Lithgow, Kevin Kline, and Zachary Quinto perform a live table-read of the Mueller report, with the goal of helping Americans understand Special Counsel Mueller’s findings. This as Intelligence Committee Chairman Rep. Adam Schiff says his committee may subpoena Mueller soon.
This essay is part of a series on cultural, scientific and esoteric matters.

ABOUT THE AUTHOR
P. Greanville is The Greanville Post's editor in chief.

Eve of Destruction: Iran Strikes Back