June 26, 2019
BE SURE TO PASS THESE ARTICLES TO FRIENDS AND KIN. A LOT DEPENDS ON THIS. DO YOUR PART. 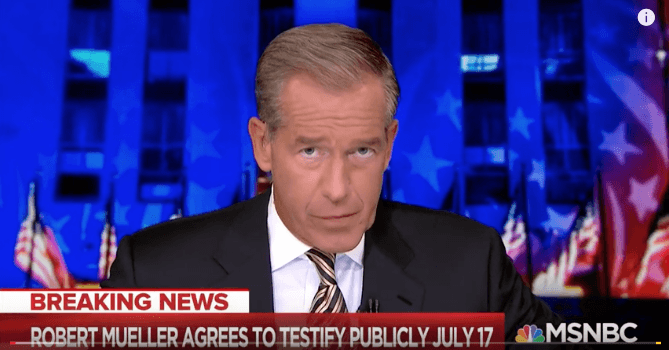 ABOVE: Brian Williams, (1) a confirmed faker, and professional disinformer attached to NBC, is one of thousands of well paid media critters vetted to do the empire’s bidding around the clock. Many Americans are now seeing—at last—that the mainstream media suck, but they continue to imagine, wistfully, there wass once a “golden age of US jounalism”.  That’s just another self-delusion. For his misleading labour, Williams gets about $10MM a year. He’s part of that “10%” enabling the “1%” oppressing everyone.

This writer remembers one afternoon in the late 70s. My business partner and I went over to the local pub for a sandwich and a brew. As we sat at the bar, the pub manager Bob turned on the television and announced ” Stooge Time!” The men sitting at the bar all applauded , and we had to sit through this nonsense that was only funny and cute when we were kids.

Fast forward 40 years and one still has to sit through the nonsense when viewing mainstream news shows OR the Congress on -Span. Stooge time is once again the choice of the masses. First and foremost you have the millionaire and mega millionaire ( so called ) journalists who push across the news only fit for an empire. Most of what they shovel your way is Republican VS. Democrat food fights, never on the most important issues we working stiffs should be concerned with. No mention of this obscene militarism and military spending ( over 50% of our federal taxes ) that bankrupts our economy. No mention of the need for real National Health Care for ALL without the predatory private insurers being involved. {Please note: Why should the millionaire and uber rich journalists care when they can easily afford what are labeled ‘ Cadillac health insurance plans’?} Why should the Congress people care when it’s on our dime that they get great health coverage? Moving on, issues like having the uber rich pay what their class paid in the 50s , 60s and 70s when the top federal income tax bracket was anywhere from 90% to 78%, and not the current less than 40% one.{ Of course, NO ONE actually paid or pays what their bracket dictates- that is why they have accountants to chip away through deductions.} All in all, the stooges we see on the boob tube news shows and the floor of Congress really do not have a clue about what we working stiffs deal with. Yes, sincere politicians like Ms. Ocasio Cortez and Bernie Sanders ( to name a few ) do care, but they still reside under that ‘ Big Tent ‘ corrupt party. As for the other party, well, they are so far removed from working stiffs….

This empire loves to have their bought and paid for media make heroes of uber rich celebrities, including our sports stars and politicos. Most of these people, even the few who truly care about we working stiffs, do NOT live as we do. They all don’t have to worry about being a few paychecks from the street, or about deciding how to care for their bodies and teeth for lack of viable and full insurance coverage. These folks won’t worry about feeding their kids properly or making the next mortgage or rental payment. All any of we working stiffs can get from the uber rich is the usual LIP SERVICE!  Thus, phony populist demagogues like Trump ( Make Amerika Great Again for the Few) and Obama ( Hope for the Change that never comes) travel in the same circles… insulated from the rabble who continually vote and support them. Why not? After all, it’s Stooge Time!!

(1) In February 2015, Williams was suspended for six months from the broadcast for misrepresenting his experience in the 2003 invasion of Iraq. At the time, his salary was $10 million a year, with a five-year contract signed in December 2014.