Home IRAN On Eve Of 4th Of July Parade U.S. Attempts To Lure Iran Into Shooting Down Another U.S. Plane

On Eve Of 4th Of July Parade U.S. Attempts To Lure Iran Into Shooting Down Another U.S. Plane

A dispatch by "b", editor in chief of Moon of Alabama

Today a manned U.S. reconnaissance plane entered Iranian airspace in a clear attempt to provoke Iran into shooting it down. Such an incident would have created an occasion for Trump to give the American people a special 4th of July fireworks.

On July 3 1988 the guided missile cruiser USS Vincennes shot down the civil Iranian Flight 655 with 290 people on board. The U.S. claimed that the plane's transponder was signaling an Iranian military identification code, that it was seemingly attacking the Vincennes, that the ship warned the plane 12 times, and that the ship was in international waters when the incident happened.

The crew of the Vincennes received medals for killing the Iranian civilians.

Investigations showed (pdf) that all the above claims were false. The shoot down was intentional. Iran sued the US in the International Court of Justice (ICJ) over it. The case was settled in 1996 when the U.S. agreed to apologize and to pay $61.8 million to the families of the victims.

On June 20 a large U.S. reconnaissance drone, accompanied by a manned U.S. military airplane, flew into Iranian air space east of the Strait of Hormuz. Iran shot the drone down. The U.S. threatened to strike Iran over the incident but Trump did not follow through.

There were reports that some people in the White House doubted that the U.S. Central Command, the U.S. military command for the Middle East, told it the full truth about the incident. Two days before the drone incident happened Secretary of State Mike Pompeo, the former CIA director, had unusual talks with the U.S. Central Command. This led to speculations that the incident was designed to provoke Iran into a shoot down and to push Trump into a war on Iran.

The case today is not in doubt. The U.S. military definitely tried to provoke Iran into shooting down another one of its planes. 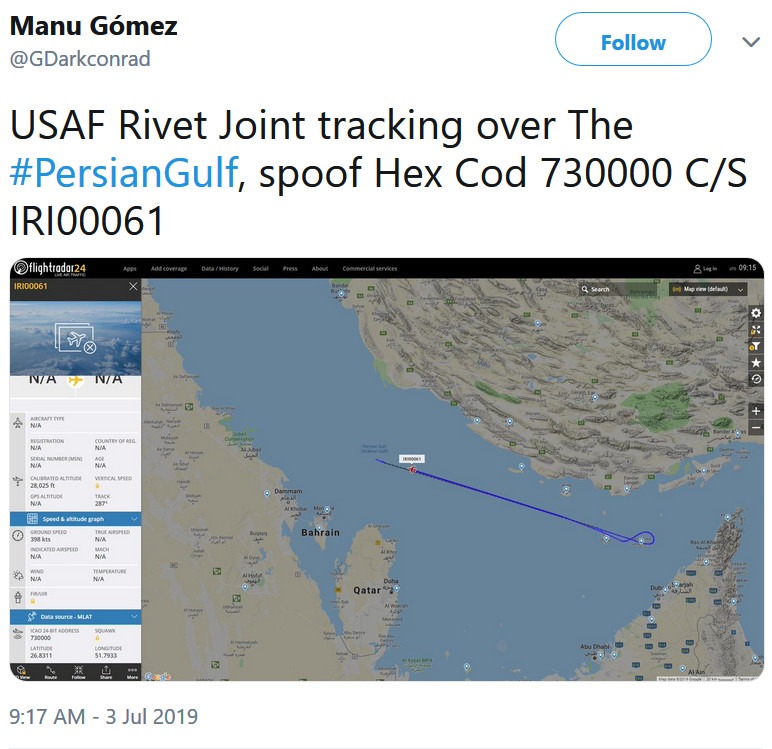 The US Airforce RC-135V Rivet Joint are signal intelligence planes that snoop on other countries. 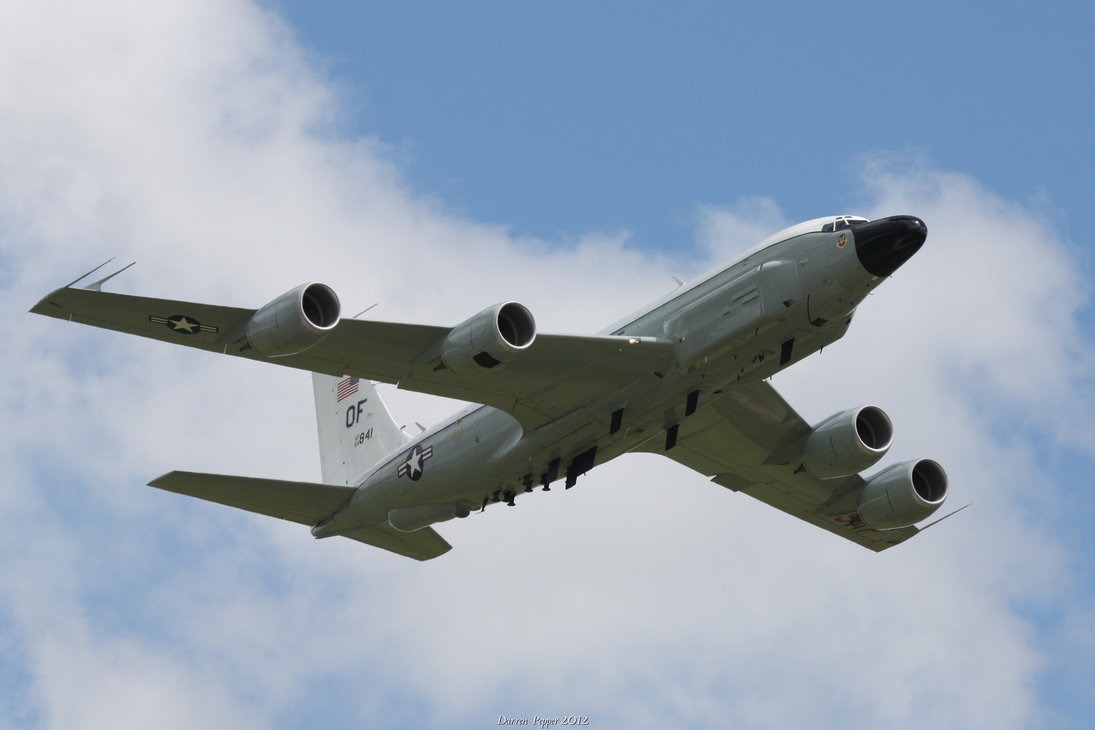 The plane flew over the islands Abu Musa and Sirri in the Persian Gulf which are Iranian territory and Iranian airspace. It falsely signaled that it was an Iranian plane.

The aviation transponder of the U.S. spy plane was set to a code that is associated with Iran. The International Civil Aviation Organization (ICAO) defined (pdf) 24-bit addresses that identify the type of the plane and the country where a plane is registered . The 24 bit codes for Iranian registered airplanes begins with the country identifier 0111 0011, written in hexadecimal as 73. The flight radar page that Manu Gomez used displays these 'S-Mode' transponder codes the airplane sends as a six digit hexadecimal number.

This use of code that identified the plane as Iranian was not a mistake but absolutely intentional:

Steffan Watkins @steffanwatkins - 11:53 utc - 3 Jul 2019
Steffan Watkins Retweeted Manu GómezThere are so many things wrong with what the #USAF is doing here, that are very much not evident to the casual observer.

1) The RC-135 has changed its unique transponder number to 730000 (hex), an Iranian assigned code. So, the USAF is impersonating an Iranian plane.

2) As @GDarkconrad pointed out, this isn't an accident, the USAF did this with Venezuelan codes off the coast of #Venezuela too. US reconnaissance planes are impersonating the codes of the countries they are conducting reconnaissance on, endangering future civilian flights.
...

The track shows that the plane was coming from west north west, probably Kuwait, and flew directly over Sirri Island and Abu Musa. It then immediately turned around and flew again over both islands. 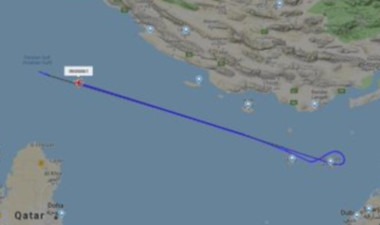 Detail of the tweeted screenshot
Sirri Island is the location of an oil platform that was destroyed by the U.S. Navy forces on April 18, 1988. The island has a landing strip and there are several oil and gas installations on it.

Abu Musa is a 12.8 square kilometers (4.9 sq mi) inhabited island near the entrance of the Strait of Hormuz. It is, like Sirri, Iranian territory and Iran has troops stationed there. They have decent air defense systems (vid) well capable of taking the Rivet Joint plane down. Abu Musa is the Iranian 'castle' that controls the Strait and most traffic west of it. Its strategic importance is immense.

After Iran shot down the U.S. drone its foreign minister posted maps showing the flight path of the drone and the demarcation of the Iranian airspace (red line). It is obvious that the U.S. plane today entered it. 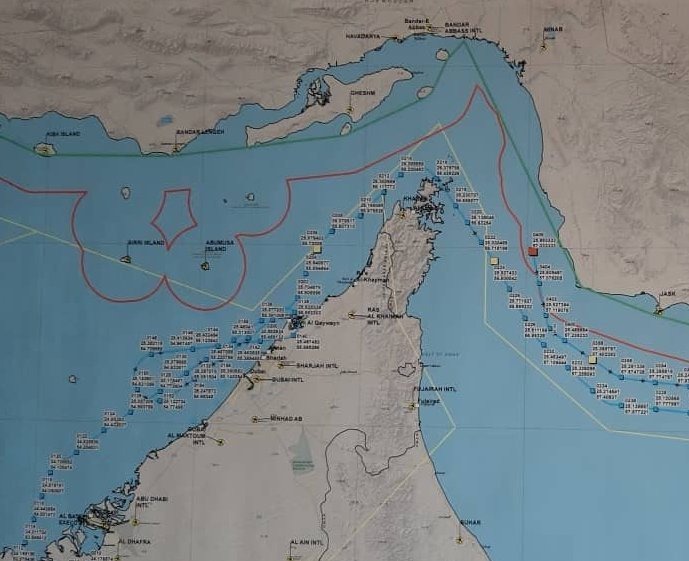 This morning the U.S. spy plane willingly penetrated Iranian airspace. It squawked a fake code which showed ill intention. This happened on the 31st anniversary of Flight 655. The Iranian military would certainly still like to take revenge for that mass murder. It was a huge provocation likely intended to lure Iran into shooting it down.

Trump recently threatened to 'obliterate' some areas of Iran should it attack "anything American":

Donald J. Trump @realDonaldTrump - 2:42 utc - 25 Jun 2019....Iran’s very ignorant and insulting statement, put out today, only shows that they do not understand reality. Any attack by Iran on anything American will be met with great and overwhelming force. In some areas, overwhelming will mean obliteration. No more John Kerry & Obama!

This led to speculation that Trump was threatening a nuclear strike.

Had Iran shot the plane down it would have been clearly within its rights. But imagine it had done so. A manned U.S. reconnaissance plane, not a drone, would have come down and the crew would be dead. U.S. media would scream for revenge. [It is this obnoxious aspect of US culture and power, its sanctimonious exceptionalism, and its ethnocentric hypervaluation of American lives over any other, that helps the empire commit atrocities with impunity, always counting on the active collaboration of a whorish media system —a huge mercenary noise machine—that can easily whip up a hysterical reaction among brainwashed Americans, thereby giving the imperial military the green light for devastating retaliation, and then some. It's an infernal situation that will not disappear until this propaganda machine is properly seen for what it is and utterly defeated. —Eds.]

It would have happened on the eve of Trump's 4th of July speech which will be followed by the military parade and overflight he ordered. 5,000 people from military families are invited to the event.

An ideal TV situation to announce that the U.S. Commander in Chief ordered to 'obliterate' Abu Musa island, the castle that controls the Strait of Hormuz, with maybe a small nuke. The U.S. public would have loved those 4th of July fireworks. Newspapers would headline "Commander In Chief Demonstrates His Resolve!" Trump's approval rating would soar to above 80%.

It would take days until the information that the flight was an intended provocation would enter the news. U.S. media would simply ignore it just as they ignored the evidence about Flight 655. The island would be unusable for Iran but the wider environmental damage from a small, kiloton range nuclear device would be minimal. No one in the U.S. would care about it.

One wonders who came up with such a nefarious plan. Was it Trump, the great showman, himself? Was that the reason why he ordered the military to join the 4th of July parade on such a short notice? Or was it John Bolton or 'we lie, we cheat, we steal' Mike Pompeo? Some minion at the CIA or CentCom?

Whoever came up with it, and those who signed off to allow this incident to happen, will now be disappointed. Iran clearly did not fall into their trap.

The world owns a big thank you to the Iranian air defense crews on Abu Musa for their disciplined behavior.

Editor's Note: Abou Musa is very much an inhabited island, not just a lump of sand in the Pesian Gulf.  See this video to form a better idea that an American attack—an "obliteration" as the maniacs in Washington threaten— would  entail the killing of thousands of peaceful residents.