Here are two visuals from the latest annual U.N. report about the world’s refugee situation, “UNHCR Global Trends 2018”, and though these images don’t pack the emotional punch of a child’s corpse that has just been washed upon a beach after drowning when his family had attempted to escape from a country that the U.S. and its allies were ‘trying to make free’ by bombing it to hell, each of these two pictures below contains a much bigger and more important message than does any such tear-jerking image or anecdote, but each of these pictures requires a bit of intelligence in order to understand it: 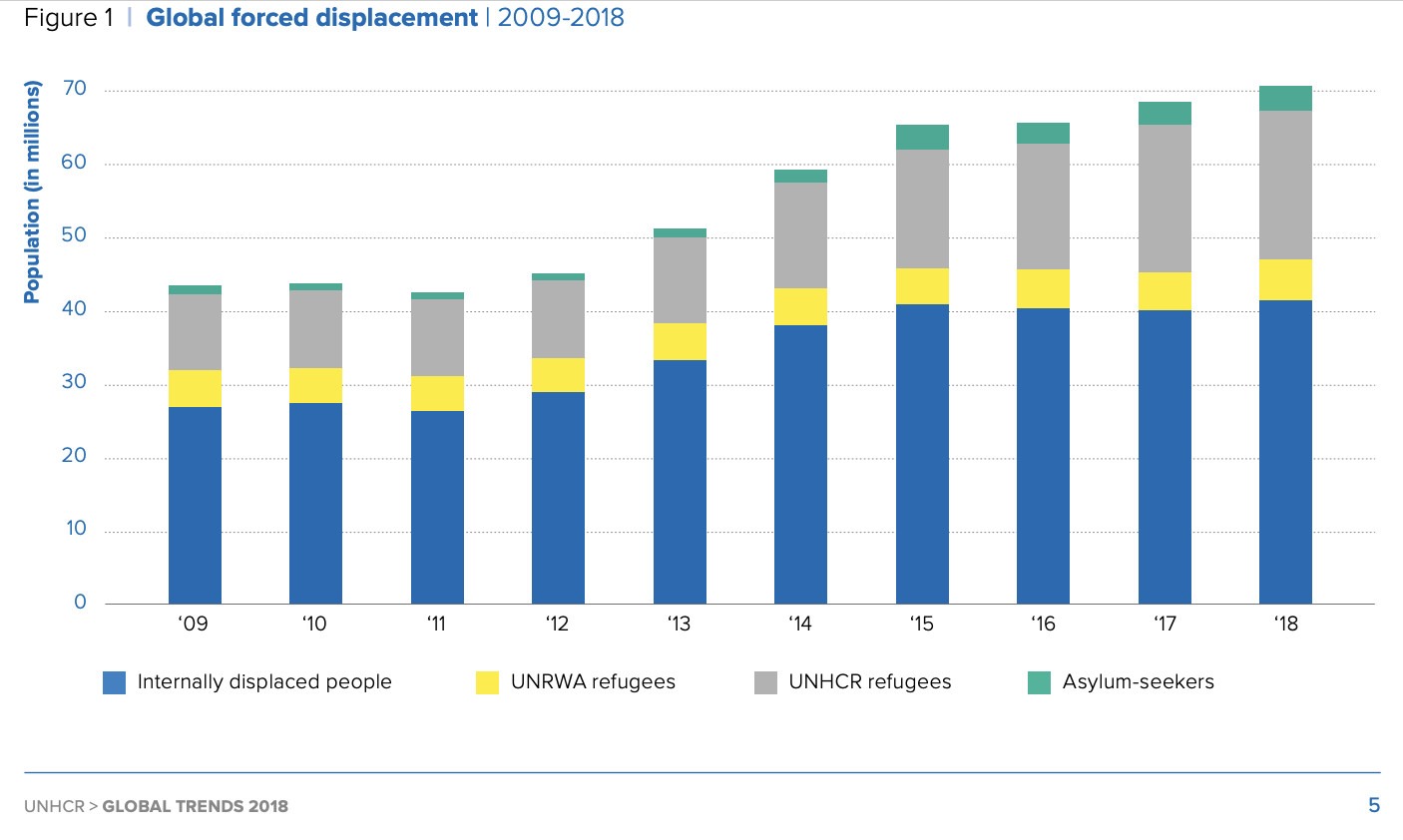 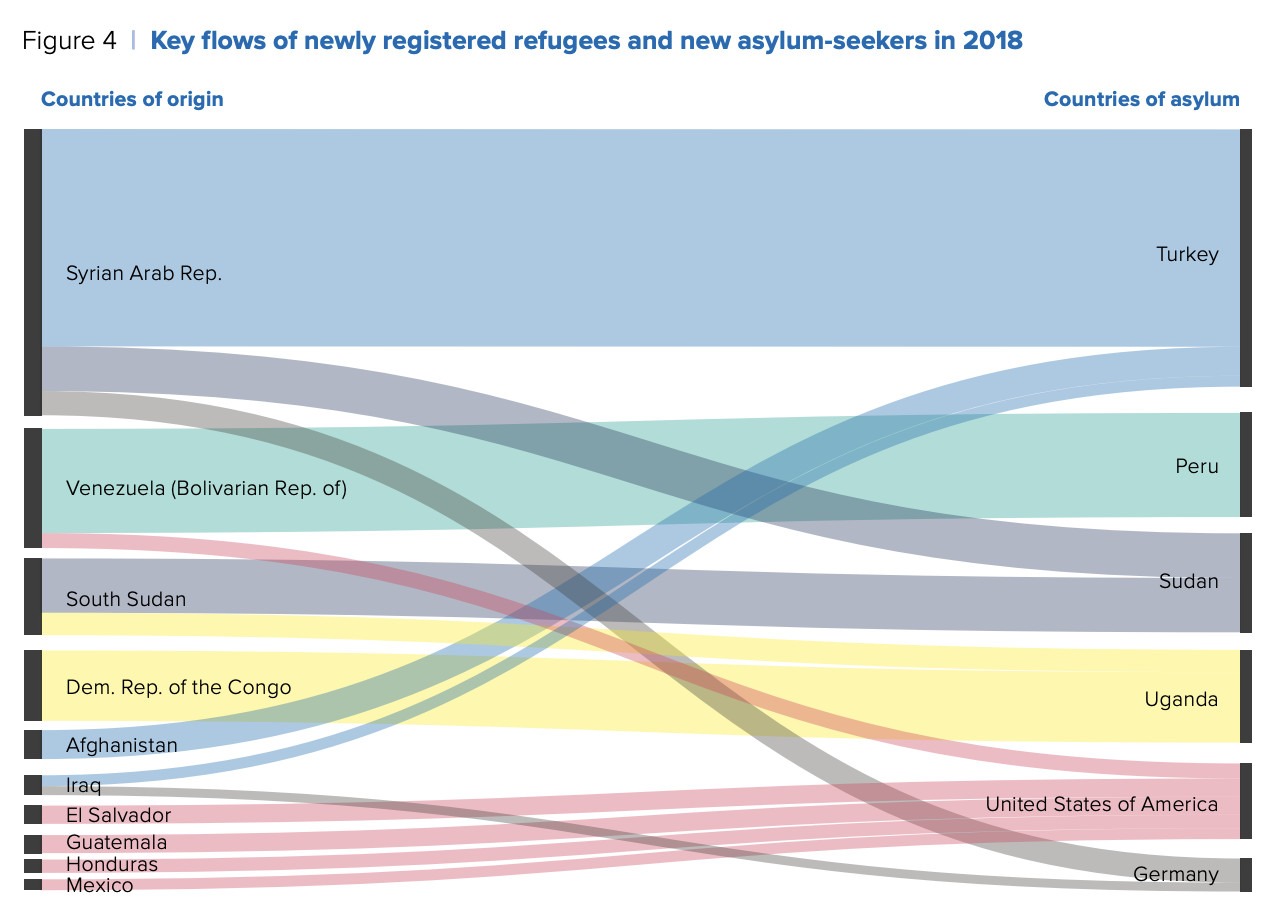 The first picture shows the result of the U.S. regime’s regime-change wars under Obama and Trump, in Syria and Venezuela especially. (Syria by using Al Qaeda in Syria to lead jihadists to bring down the Government, and Venezuela by strangulating sanctions that have produced an economic blockade which prohibits food and medicine from being able to reach the population). The 9-year earlier “UNHCR Global Trends 2009”, which covered the end of the George W. Bush Presidency, had reported that “There were 43.3 million forcibly displaced people worldwide at the end of 2009,” and that this was up from 42.0 million in 2008. The “UNHCR Global Trends 2007” said only that “available information suggests that a total of 67 million people had been forcibly displaced at the end of 2007”, and so there might have been a reduction during the later years of Bush’s Presidency. In any case, the number of “forcibly displaced people” was stable during the final years of Bush’s second term and the entirety of Barack Obama’s first term, until 2012. 2011 was the first year of the Arab Spring uprisings, which were a CIA production, as was documented by two books from Ahmed Bensada, each of which was well reviewed by Stuart Jeanne Bramhall, in her two articles, one on 18 January 2014, and the other on 25 October 2015. Of course, the impression that the American public was presented about the Arab Spring uprisings is that those were spontaneous. Actually, Obama came into office in 2009 hoping to overthrow Syria’s Government.

So, whereas the numbers had been stable for Obama’s first term of office, all hell broke loose throughout his second term, with his invasions of Libya and Syria, plus his continuation of George W. Bush’s occupations of both Afghanistan and Iraq. And, now, under Trump, the number is back again to GWB’s peak level and rising.

As I noted on June 30th under the headline “U.S. Government Tops All For Creating Refugees”, “the U.S. regime’s regime-change operations produce around half of the entire world’s refugee-problem.” That fact is shown in the second visual here. (Just look at Syria and Venezuela there.) What the first visual shows is that the U.S. regime’s attempts to overthrow the Governments of Syria and of Venezuela caused those global totals to soar. Those two nations alone accounted for nearly half of the global total, and part of the rest was from America’s prior invasions: Afghanistan, Iraq, the U.S.-backed coup in Honduras in 2009, etc. America’s invasions and attempted coups (such as in Venezuela) provided the dynamos that drove those rising numbers of refugees.

Max Blumenthal and Ben Norton at The Gray Zone headlined on June 19th, “This celebrated Western-funded nonprofit collaborated with al-Qaeda to wage lawfare on Syria” and documented how U.S.-and-allied billionaires and the U.S. Government fund “lawfare,” a war in international courts, and not only a huge international propaganda campaign to demonize Bashar al-Assad, in order to overthrow him. I had previously documented that “U.S. Protects Al Qaeda in Syria”. Actually, Obama bombed Syria’s army at the oil center city of Deir Ezzor on 17 September 2016 in order to enable both Al Qaeda and ISIS to take over that city. The U.S. team talk a storm against “terrorism” but quietly (along with the monarchs of Saudi Arabia, UAE, and Qatar) sponsor it as being “boots-on-the-ground” fighters — proxies there, instead of U.S. troops — to bring down leaders such as Muammar Gaddafi and Bashar al-Assad.

So, when the U.S. and its allies complain about the refugee crisis, and pontificate against “dictators,” and assert international law when they are the worst violators of international law, maybe they enjoy fooling their own public, but outside the U.S. alliance, their lying and evil are obvious. It even shows up clearly in the UNHCR’s statistics (such as those visuals). Obviously, China, Russia, Iran, Venezuela, and other nations that the U.S. regime labels as ‘enemies’, are not to blame for those tens of millions of refugees. The U.S. and its allies definitely are to blame for it. This isn’t a situation where the pot is calling the kettle black, but instead it’s one where the pot is calling the fresh-fallen snow black, and in which only propagandistic ’news’ media refuse to reveal this to their audiences. The snow is white, and the U.S. regime and its allies are red, covered with their tens of millions of victims’ blood and flaming misery.

Bruce Dixon: A Giant Walks On

Driving the NHS to market