How Stupid Do They Think We Are? 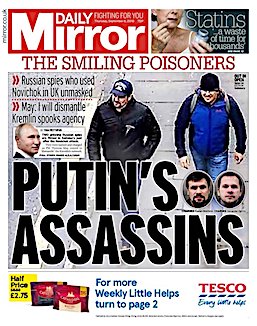 “I daresay you haven’t had much practice,” said the Queen. “When I was your age, I always did it for half-an-hour a day. Why, sometimes I’ve believed as many as six impossible things before breakfast.”

[dropcap]C[/dropcap]onsumers of the print or electronic output of the League of Copy Typists and their Instructors are expected to believe many impossible things and believe them, not just before breakfast, but all day too.

Come to think it, believing any part of the official Skripal story, from the incredibly lethal nerve agent that didn’t kill them, to the spectacular coincidence of the British Army’s chief nurse being on the scene, to the re-wrapped perfume bottle would tax the White Queen’s ability. Here’s a list. But that’s not to say that we’re finished yet: there always seems to be another absurdity like the dead ducks.

Pseudo psychology explains geopolitics. And pretty idiotically too: a whole country on the couch. “Russia is more insecure and paranoid“, “a kind of neurotic disorder that renders Russia’s sense of insecurity” “The deep sense of humiliation, the dread of arrogant Westerners, the fear of NATO encirclement.” or maybe it’s not the whole country, just Putin: Putin’s insecure because of Russia’s “diminished role in the world“. “Well, Russian President Vladimir Putin is a textbook case of someone with a serious inferiority complex.” Anyway, some gasbag pseudo-psychology explains it: there’s no reality, Russia/Putin is just naturally paranoid. Probably nothing you can do about it.

NATO is just going along, minding its own business when, entirely without provocation, hostile nations try to destabilise the world, interfere with freedom of navigation, assault the Rules-Based International Order, and otherwise force NATO to react. From a current Pentagon study: “Russia is adopting coercive strategies that involve the orchestrated employment of military and nonmilitary means to deter and compel the US, its allies and partners prior to and after the outbreak of hostilities.” “Deter and compel” – poor little NATO, so weak, so bullied! Russia does this because of its “deep-seated sense of geopolitical insecurity” which it has just because it has. (More geopolitical pseudo-psychology.)

And, finally, Putin is interfering in the West’s interference in another country.

Patrick Armstrong was an analyst in the Canadian Department of National Defence specialising in the USSR/Russia from 1984 and a Counsellor in the Canadian Embassy in Moscow in 1993-1996. He retired in 2008 and has been writing on Russia and related subjects on the Net ever since.