The ocean is where we came from, and without it neither we, nor any other life, would exist on the planet. If we kill the ocean, something we are very close to doing, we effectively kill the planet.

America? Please WAKE UP! Where to start as we ride our fossil fuels into oblivion? Perhaps with they are “fossil” fuels? Perhaps we could have taken a hint from “you are what you consume”. Ah well.  I think that there is this impression that global warming is this long, slow process that stretches a million years into the future, and surely we will either figure out the technology to “fix” this or we will have migrated to some other place (dead, needing to be “terra”formed Mars perhaps). There is much more than “heat” involved in this equation. The Earth is a living entity, and like us humans, attempts to respond to assaults to continue its existence, and frankly, its response is so much more critical than our individual bodies responses to illness and disease.

One area that gets lots of air time with addressing global warming are trees – particularly forests. We all know that trees take in carbon dioxide and release oxygen. We may know that the permafrost is a carbon sink – and the carbon (and methane) it is releasing as it thaws.

Methane, Natural Gas, and global warming (click here to see)
Yes, methane is 30x more dangerous as a greenhouse gas than CO2. In fact, carbon dioxide is only 26% of the green house effect; something that should make us very worried about all the focus on carbon trading, and addressing carbon emissions. And methane? There is a big push to switch from coal to “natural gas” for energy production as well as transportation. “Natural gas” is primarily methane, and occurs with varying amounts of other highly damaging gases (and yes, it releases CO2 when burned), and it too is a fossil fuel (UCS). 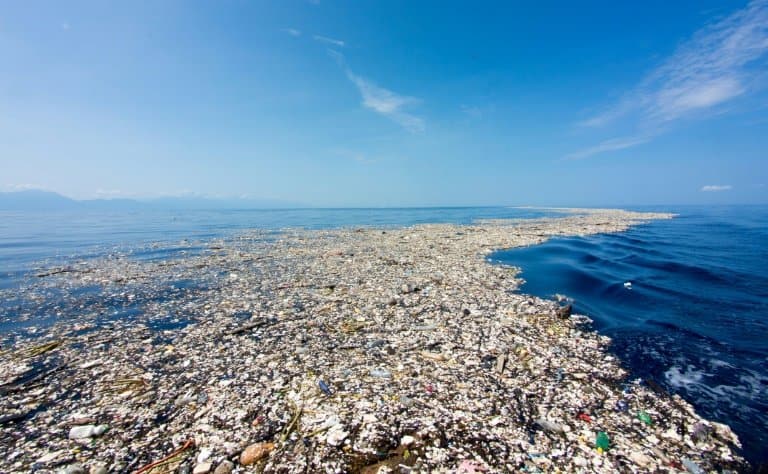 Island of plastic in the ocean. Phys.org

However, the oceans are hands down the largest and most critical carbon sink, as they absorb about 93% of carbon.  Unfortunately, oceans are not able to absorb the ever-increasing levels of fossil fuel emissions. They are also under assault by massive levels of pollution including more than 8 million tons of plastic a year. Yes, plastic is also made from …wait for it…fossil fuels. We have virtually no care over what gets dumped in the ocean, nor to the impacts of this assault. It is a prime example of “out of sight, out of mind.”

I think we should be deeply troubled that the most popular (and focused upon) solutions being put forward to address global warming are actually focusing on the smallest part of the problem. Whenever I see something like this where there’s a bright spotlight and marching band around one thing (like CO2, and the suggestions for addressing it) and virtual silence on other things that are much bigger – like saving the ocean.

The article below is largely based upon a report at Phys.org that I recommend reading in full. It is not that long, and is an eye opener:

Daniel Rothman, professor of geophysics and co-director of the Lorenz Center in MIT’s Department of Earth, Atmospheric and Planetary Sciences, has found that when the rate at which carbon dioxide enters the oceans pushes past a certain threshold—whether as the result of a sudden burst or a slow, steady influx—the Earth may respond with a runaway cascade of chemical feedbacks, leading to extreme ocean acidification that dramatically amplifies the effects of the original trigger.

This global reflex causes huge changes in the amount of carbon contained in the Earth’s oceans, and geologists can see evidence of these changes in layers of sediments preserved over hundreds of millions of years.

The ocean is where we came from, and without it neither we, nor any other life, would exist on the planet. If we kill the ocean, something we are very close to doing, we effectively kill the planet.

The continuous accumulation of carbon dioxide in the planet’s oceans—which shows no sign of stopping due to humanity’s relentless consumption of fossil fuels—is likely to trigger a chemical reaction in Earth’s carbon cycle similar to those which happened just before mass extinction events, according to a new study.

MIT geophysics professor Daniel Rothman released new data on Monday showing that carbon levels today could be fast approaching a tipping point threshold that could trigger extreme ocean acidification similar to the kind that contributed to the Permian–Triassic mass extinction that occurred about 250 million years ago.

Rothman’s new research comes two years after he predicted that a mass extinction event could take place at the end of this century. Since 2017, he has been working to understand how life on Earth might be wiped out due to increased carbon in the oceans.

“If we push the Earth system too far, then it takes over and determines its own response—past that point there will be little we can do about it.”
—Timothy Lenton, University of Exeter

Rothman created a model in which he simulated adding carbon dioxide to oceans, finding that when the gas was added to an already-stable marine environment, only temporary acidification occurred.

When he continuously pumped carbon into the oceans, however, as humans have been doing at greater and greater levels since the late 18th century, the ocean model eventually reached a threshold which triggered what MIT called “a cascade of chemical feedbacks,” or “excitation,” causing extreme acidification and worsening the warming effects of the originally-added carbon.

Over the past 540 million years, these chemical feedbacks have occurred at various times, Rothman noted.

But the most significant occurrences took place around the time of four out of the five mass extinction events—and today’s oceans are absorbing carbon far more quickly than they did before the Permian–Triassic extinction, in which 90 percent of life on Earth died out.

The planet may now be “at the precipice of excitation,” Rothman told MIT News.

On social media, one critic called the study’s implications about life on Earth “completely terrifying.” 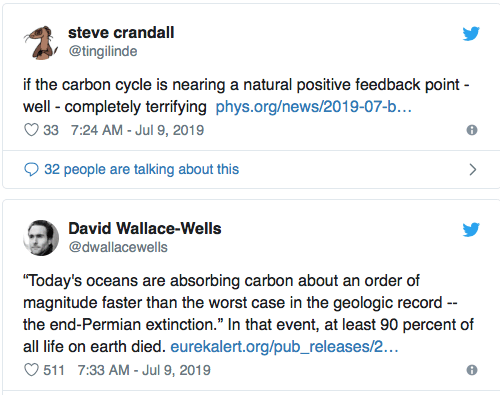 The study, which was completed with support from NASA and the National Science Foundation, also notes that even though humans have only been pumping carbon into the oceans for hundreds of years rather than the thousands of years it took for volcanic eruptions and other events to bring about other extinctions, the result will likely be the same.

“Once we’re over the threshold, how we got there may not matter,” Rothman told MIT News. “Once you get over it, you’re dealing with how the Earth works, and it goes on its own ride.”

Other scientists said the study, which will be published this week in the Proceedings of the National Academy of Sciences, represents a clear call for immediate action to drastically reduce the amount of carbon that is being pumped into the world’s oceans. Climate action groups and grassroots movements have long called on governments to impose a moratorium on fossil fuel drilling, which pumps about a billion metric tons of carbon into the atmosphere every year.

“We already know that our CO2-emitting actions will have consequences for many millennia,” says Timothy Lenton, a professor of climate change and earth systems science at the University of Exeter. “This study suggests those consequences could be much more dramatic than previously expected.”

“If we push the Earth system too far,” Lenton added, “then it takes over and determines its own response—past that point there will be little we can do about it.”

Every piece of news we hear about confirms what we have known for quite a while: the capitalist death grip on the planet guarantees that the environmental betrayal will continue, especially in the USA. Today's leadership, in most cases, is worthless, and fully contributory to the problem.

All material is under a Creative Common share with attribution license unless otherwise noted.

This post is part of a series on humans’ destruction of the natural world.

About the Author
Julia Conley is a staffwriter with Common Dreams.