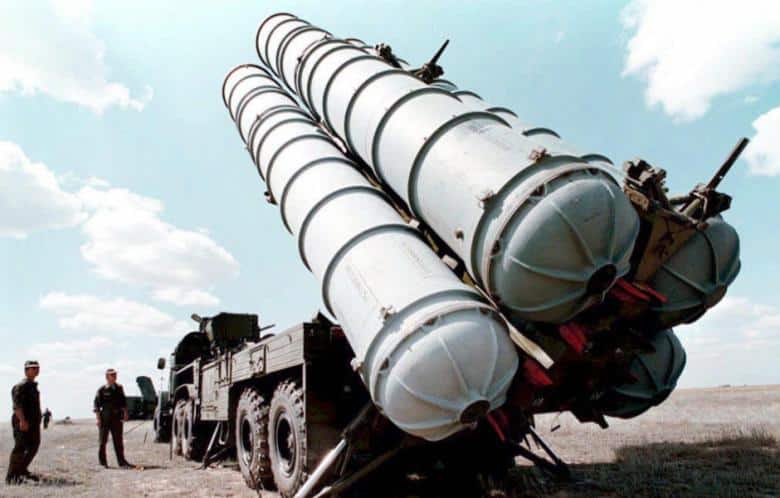 Today first parts of the Russian S-400 air defense systems arrived in Turkey. The Russian Ministry of Defense posted a video of the arrival on Facebook. The Turkish Ministry of Defense video showed the unloading of six support vehicles belong to a S-400 set. A complete S-400 set consists of two radars, a command post, eight launch vehicles with four missiles each, and various loader and other support vehicles. Turkey has ordered two complete sets for which it will pay about $2.5 billion.

The U.S. is threatening economic sanctions against Turkey for ordering and receiving the system. It will also kick Turkey out of the F-35 fighter jet program. Turkey was one of the main partners for the F-35 program. It was supposed to receive 100 of the planes and it manufactures parts of the system. Turkey will not receive the ordered planes and those parts will now be made by a U.S. company.

The S-400 system Turkey receives is an export version. It will at first use the 48N6E missiles which have a reach of 250 kilometer. The systems Russia uses include the 40N6E missiles with a reach of 400 kilometers. It will take several months until the first system set in Turkey is complete and operational. So far only 20 Turkish soldiers have been trained on it. 80 more soldiers will arrive in Russia around the end of July to receive their training.

NATO is not amused about the Turkish acquisition:

A NATO official told CNN on Friday that: "It is up to allies to decide what military equipment they buy. However, we are concerned about the potential consequences of Turkey's decision to acquire the S-400 system."The official added that, "interoperability of our armed forces is fundamental to NATO for the conduct of our operations and missions."

The S-400 in Turkey is not supposed to be interoperable with NATO. The most likely initial deployment area for the new system will be around Ankara to protect the wannabe-Sultan Erdogan from potential U.S. or Israeli attacks.

The government controlled Turkish news agency Anadolu made it abandonedly clear what the system is supposed to target. When it announced the news of the arrival it attached the picture below to its tweet: 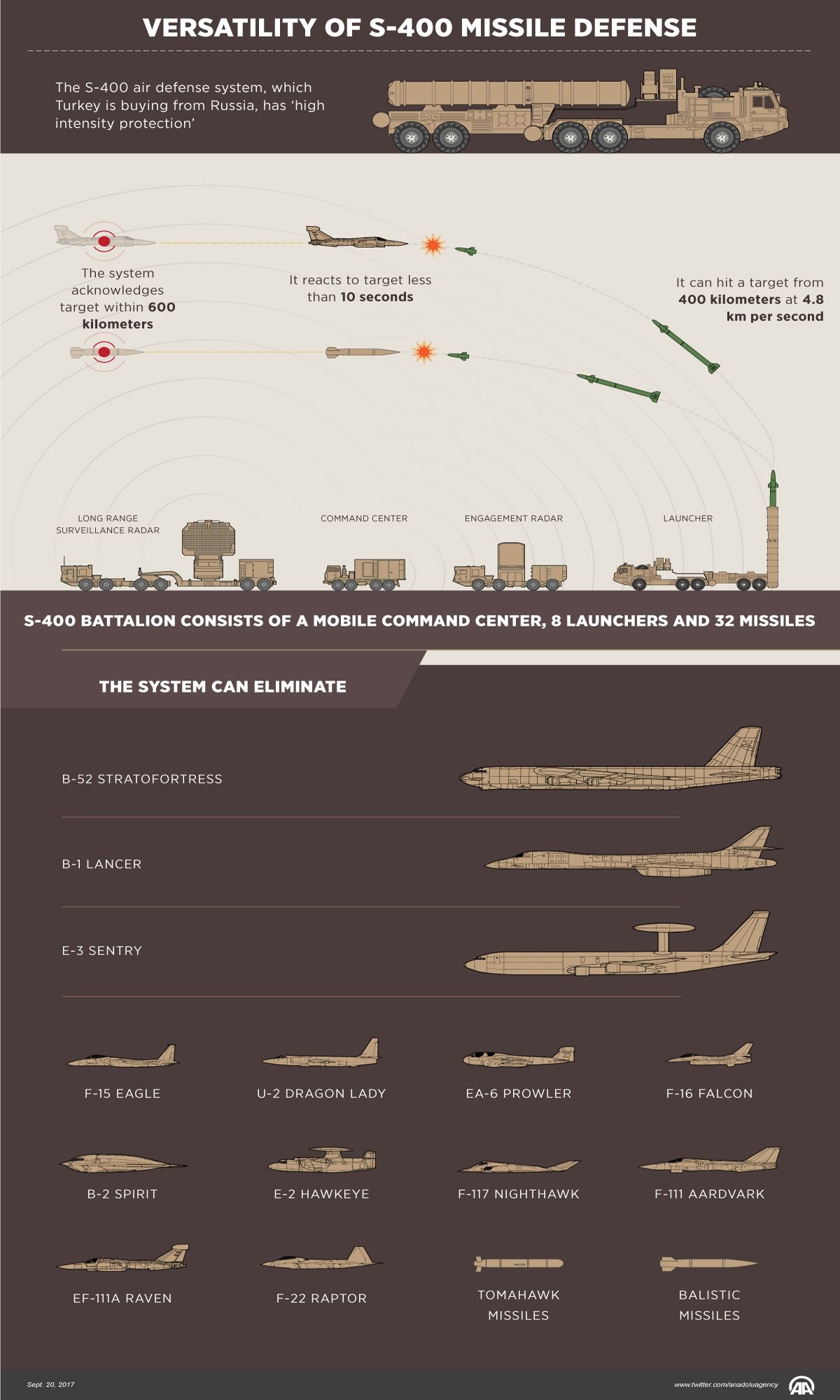 The upper part of the graphic explains the S-400 system. The lower part says: "The system can eliminate" and then shows the silhouettes and names of U.S. military bomber, fighter and radar planes as well as Tomahawk cruise missiles. The only one missing is the 'invisible' F-35 which the S-400 can of course also detect and eliminate.

The second S-400 set will likely be stationed on Turkey's southern coast from where it can cover Cyprus and protect Turkish oil interests in the eastern Mediterranean sea. Turkey recently started drilling around Cyprus. North Cyprus is occupied by Turkey since 1974. But its claims for exploration rights extend even to the south of the island and recently started drilling there. 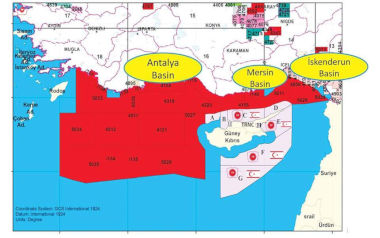 The European Union, which does not recognize Turkey's occupation of north Cyprus, signaled that it will sanction Turkey over it.

Turkey's relation with the U.S., NATO and the EU are likely to get worse. Russia's slow but steady strategy to draw Turkey to its side is progressing very well. With the F-35 purchase canceled Turkey will have to look to Russia for acquiring modern fighter planes. An order will depend on the manufacturing share Russia is willing to hand over to Turkey.

The Turkish economy is not well. Its aggressions in Syria and Libya proved to be costly. President Erdogan recently fired the chief of the Turkish central bank who was not willing to lower the interest rate. Erdogan believes that high interest rates cause high inflation while 99% of all economists believe that higher interest rates are the best way to fight inflation. Many Turkish companies and private households took out loans that are denominated in Euro or U.S. Dollar. If the central bank lowers the interest rate the Turkish Lira will sink and repaying the loans will become more expensive. New U.S. and EU sanctions will make these problems worse.

Erdogan may soon have an air defense system that can protect Turkey's capital. But the move will cost the country, and Erdogan, in many other fields. Russia is the country that wins from Turkey's problems. One hopes that it will use the leverage it gains over Turkey to remove the Turkish invasions from Syria.

I reckon this sale and refusal of Turkey to back down to U.S. threats will eventually split the country away from the west. It’s like a fatigue fissure in a high stress component. Once started, the fracture or failure of the piece is inevitable. I wonder how long it will take before NATO starts collapsing because of this weapons procurement?

This is par for the course with the Outlaw Empire and its vassal states.

32 Missiles per each set, so they can theoretically down 64 incoming cruise missiles, the US standoff weapon of choice.

One supposes that Turkey has other defences as well, however at $78 million per missile it's an expensive option! Of course resupply of missiles will/would be much less expensive.

Not even close to how expensive it would be for US or Israel to lose a surveillance plane or jet of course.

I'm really interested in the question raised by "high interest rates cause high inflation while 99% of all economists believe that higher interest rates are the best way to fight inflation". It seems that Modern Monetary Theory (MMT) says that a state that creates its own currency (i.e. prints the dinars) can print as much as they want, up to the ability of their economy to supply goods and services that the money can buy. After that, inflation occurs because there is simply more money chasing a finite supply of things to buy, so the things become more expensive. See Michael Hudson and other links in previous threads.

Thanks for the posting b

Does Turkey still have NATO nukes in its country? I would think that their presence or not is a bigger deal than the F35 boondoggle.

The firing of the leader of the Turkey Central Bank is interesting and I wonder who will be appointed next and what their finance strategy for Turkey will be to stand up against the financial punishment machinations of the West.

Yes, higher interest exert downward pressure on the fiat currency. But it doesn't solve the underlying problem of the economy: it just makes your fiat currency more expensive because the Central Bank is the lender of last resort in such system (therefore its interest rate is always the market's base, minimum rate).

Fiat currency is devoid of substance. Technically, it's just a financial asset which has the particularity to act like money. In this context, inflation is merely the ration between the total amount of commodities in circulation on the market and the total mass of a given fiat currency in circulation on this same market. It is just a relation: economists who say inflation is inherently good or bad or that there is a "natural" inflation rate are simply lying.

The really best way to curb inflation is the way China is doing: with high economic growth based on infrastructure ("real economy"). So what it has 4% inflation rate? With an economy growing at a 10-6.5% rate, it is very acceptable. Brazil, with a much more recessive policy since Temer rose through a coup d'État, has a 3,68% inflation rate but at the cost of 4 million + people sent to extreme poverty (the state of poverty where you're literally dying of hunger) plus the decimation of the middle class.

Oops, according to the original post, Turkey bought a total of 64 S-400 missiles, and the support infrastructure, for $2.5 billion USD. So the first 64 missiles they fire cost only $39 million each. Not sure how much additional ammo they received in the initial purchase.

$39 million per shot is still cheaper than fighter jets such as the F22 at $250 million.

About the Author
"b" is Moon of labama's editor's nom de guerre. He likes it that way.

A Plausible Theory Of What Jeffrey Epstein Was Actually Doing

Emigrating to Russia? Here are the observations of somebody who did it