Home ABOMINATIONS Jimmy Dore: Who’s that douchebag Donny Deutsch? Everything Wrong With MSNBC In One Clip (Live From Chicago)

Jimmy Dore: Who’s that douchebag Donny Deutsch? Everything Wrong With MSNBC In One Clip (Live From Chicago)

Everything Wrong With MSNBC In One Clip (Live From Chicago)

Focusing on one of the biggest, in-your-face scumbags around, Donny Deutsch, Jimmy deconstructs the liberaloid disinformation engine that passes for legitimate journalism and commentary, MSNBC.

But, who the hell is Donny Deutsch?

The Tampa Bay Times offers (via Los Angeles Times) a good glimpse of what Deutsch is up to, and where he's literally coming from. Apparently, like fellow decadent narcissist Donald Trump, he's  he's had a very tough life. The excerpt below is datelined November 2016. Reality-averse guys like these made the French revolution inevitable.

Donny Deutsch is an aging bad boy — and proud of it 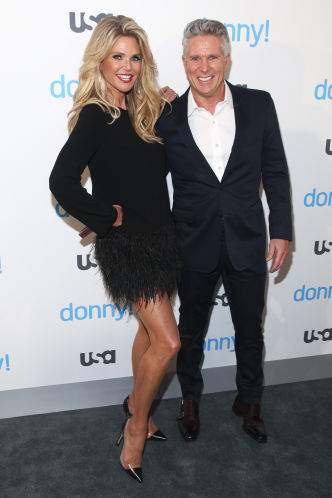 Donny Deutsch with Christie Brinkley at a Manhattan event to celebrate the premiere of Donny! It's on USA Network Tuesday nights at 10:30. Invision/AP
By Stephen Battaglio, Los Angeles Times
Published November 11 2015

As an ad executive in the 1980s and '90s, Donny Deutsch created daring campaigns, delivered provocative quotes to journalists on demand and never met a TV camera he didn't like.

When Deutsch landed his own CNBC talk show, one top media executive at another network described it as "pretty good, but it seems like an awfully expensive way to meet women."

On MSNBC's Morning Joe, where Deutsch regularly holds court as a contributor, he's been called out for posing on Instagram wearing what co-host Willie Geist calls "Baby Gap T-shirts."

"I don't know if he'd take this is as a compliment, but in many ways he's in the same league as Donald Trump," said Morning Joe co-host Joe Scarborough. "He's a guy who's had incredible success. At the same time people like to poke and jab at him, even his good friends."

Deutsch, 57, knows that his image as an iron-pumping, media-savvy rogue can make him a ripe target for mockery. So he's decided to do it himself as the star of his own sitcom, Donny!, which began Tuesday on USA Network.

"It's a jerkier cartoon version of me," he said during the filming of the show at his six-story town house on Manhattan's East Side. "It's been fun to make fun of myself, the media and wealth."

Deutsch plays a fictionalized version of himself as the host of a syndicated daytime program, also called Donny! — a salacious, low-rent version of Dr. Phil. Every episode opens with Deutsch offering wisdom to a guest on his set. He then proceeds to ignore those rules in his own life. "He is far more flawed than the people he advises," said Deutsch.

As an aging bad boy, the fictional Deutsch has trouble navigating such contemporary conventions as sexting, manscaping, sexual identity and racial sensitivity. He also regularly locks horns with his talk-show producer (played by Emily Tarver) and his three assistants.

Much of the action is shot inside Deutsch's luxurious home, purchased for $21 million. A well-equipped gym where he works out with 70-pound dumbbells figures prominently in several episodes. Love scenes play out in his actual bedroom just adjacent to the walk-in closets and highly organized shelves that house a vast collection of shoes, designer suits and signature tight-fitting tees.

Deutsch's rise began in the 1980s with a job at his father's New York agency, David Deutsch Associates, which specialized in print ads. The younger Deutsch eventually took over the shop, shortened the name to Deutsch Inc., and oversaw the creation of enough breakthrough TV commercials to be invited to the ad team that worked on Bill Clinton's 1992 presidential campaign.

Deutsch sold his agency in 2000 for $275 million. While he continued as chairman, his ease with the spotlight earned him a shot at hosting his own CNBC talk show, The Big Idea With Donny Deutsch, and regular appearances on The Apprentice with Trump.

But pitching a comedy show with himself as the star was considered nervy, even for Deutsch, who is the author of a book titled Often Wrong, Never in Doubt.

IF YOU HAVE TO, READ THE WHOLE ITEM HERE

Election 2016: In the Lions’ den. Jimmy Dore covers some Trump rallies, comments on his clueless followers