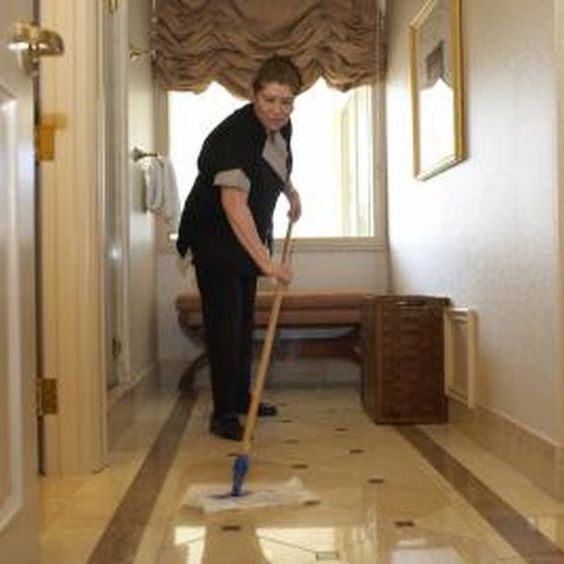 She works hard for her money, as the song relates. She's the cleaning lady, the one who gets on her knees and scrubs your toilet of all the things that none of us would ever wish to look at, let alone touch. She mops and dusts and vacuums your house for  $50 to $70 bucks, then hurries off to her next job, if she's so lucky. Does this 5 days a week, pulling in anywhere from $ 500-$ 600 a week, minus her supplies and gas, and sweat and  aches.  Then she has to factor in the nanny who watches her boy so she can work at all. That's another $ 150 to $200 off the top. Even still, her 2 year college degree could never get her that much in some white collar job- not with today's economy. So, she's the "cleaning lady", trading in respectability for some green.

She's got a husband and a baby boy.  The husband works too; the baby laughs and cries a lot. Sometimes her husband cries about not having health insurance.  He's a craftsman, skilled enough to pull in the same as his wife; not skilled enough to get his boss to pay for health insurance for the crew. Not too many craftsman jobs out there now, so his bargaining power is reduced to a whimper. Like most Florida businesses, it's a non- union shop, so the benefits are one week a year paid vacation, and a few sick days and holidays, and that's it.

The other day, one of her clients told her some startling information. She could not believe it, until she saw it right there in a business magazine. It said that, on average,  top executives in U.S. corporations earn well over 500 times more than their lowest paid full-time employee! 500 times! She could not comprehend how someone could make that much money, and not care that she and her husband could not afford health coverage.

The cleaning lady joins her husband in having no health insurance.  Simply cannot afford $400 a month for less than decent coverage.. the deductible alone could choke a horse! They did get some for the baby, thank goodness.  She, however, was not so lucky.  Had a stomach attack a few months back.  Between the emergency room, the tests and the specialist, cost her $2000 bucks, money she did not have. She pays it off, the bill, a little each month, and curses a system that does not look out for the little people, the people like her who clean our toilets.

The other day, one of her clients told her some startling information. She could not believe it, until she saw it right there in a business magazine. It said that, on average,  top executives in U.S. corporations earn well over 500 times more than their lowest paid full-time employee! 500 times! She could not comprehend how someone could make that much money, and not care that she and her husband could not afford health coverage.  She wondered if  rich people could even  go to church and  worship a  Jesus who spoke of sharing one's wealth, not hoarding it.  "Easier for a camel to go through the eye of a needle than a rich man to go to heaven!" She knew that under Trump's predecessor, nothing was done to achieve Medicare for all of us. Of course she knows that Trump and his gang of donors will never allow such a thing to occur. Why even vote, she ponders?

Each day  millions of Americans have to make choices. Should they risk financial ruin or possible bankruptcy to go and receive medical treatment? Or should they " gut it out" and hope it is not as serious as it most times is? Other Americans,  the ones who can afford it, are now paying upwards ( and climbing as I write) of $ 6000, $7000, as much as $ 12,000 per year for MEDIOCRE ( by 1970's standards) health coverage. That money could be better spent on a down payment for a first home, or a second car to get the working wife off of that "too long bus ride" each morning. It could buy that computer the children now must share at the library for important schoolwork. Goodness sakes, it could actually pay for one year's tuition and board at a state college!

The cleaning lady is not alone, sadly. As we regress to a society of more and more part time working stiffs, with NO unions to support them, films like Nick Cassevette's 2002 John Q ( based on a true story ) resound so frighteningly well. In the film the Denzel Washington character holds hostages in the hospital his son is a patient in to force them to perform a lifesaving heart transplant operation on the boy... because his insurance would NOT cover it. Former presidential candidate Rep. Michelle Bachman from Minn. once actually boasted that Americans could circumvent health coverage- doctors in the ' good old days' would take gifts and things like live chickens for payment from patients. Imagine that!! Just imagine how a public servant could actually offer such **** !

As Trump Backs Down, the Pips Squeak

Revealed: how the FBI coordinated the crackdown on...

Why Freedom Is Ending

US Billionaire Wealth Surges to $584 Billion, or...