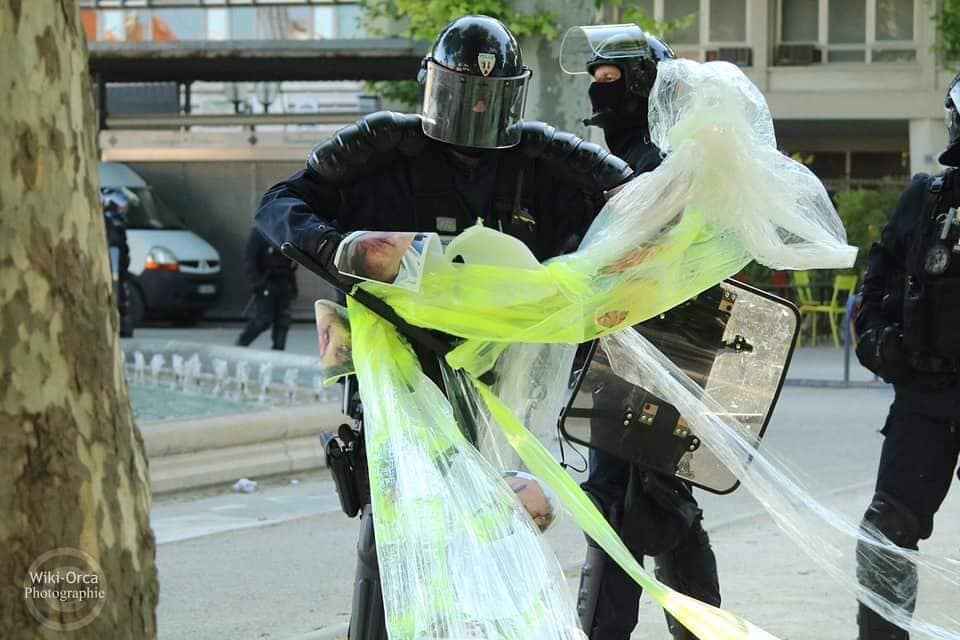 The "forces of order", as they are frequently called in France, protecting a system that causes colossal chaos.

[dropcap]A[/dropcap]t a recent demonstration against the recently fired, third-ranking French civil servant (the president of parliament), who had been caught enjoying jumbo lobster and 1,000-euro bottles of wine with his friends on the taxpayer’s centime, I chatted with a former political prisoner.

It may surprise some that he was a Westerner. The West is, of course, exceptional: everyone else has political prisoners, but there isn’t a single one in the free, free West.

He had just spent four months in prison for protesting with the Yellow Vests. In a story which appears trite but which I believed - given the fact that testimony by police cannot be questioned in France’s judicial system - he said that it was the protester next to him who had thrown something at the cops and not him. There was no falsehood in the intense bitterness with which he said, “Four months in prison - I wish that I actually had thrown it!”

He showed me the many scars and permanent knots on his wrists and forearms - defensive wounds caused by protecting himself from fiercely-armed, well-protected and ruthless riot police. I praised his sacrifice for the common good, but I did not tell him that this was exceptional: in the past eight months I had heard many similar stories. Just last weekend I saw children getting tear gassed, and yet another woman shot in the eye with a rubber bullet.

This is carnage, pure and simple, and it happens all around France every Saturday starting around 11 am.

The biggest complaint of the Yellow Vests these days may not be against the French model of government, but towards a Western Mainstream Media which acts as if such carnage doesn’t exist.

Western propaganda has shut down all criticism of French repression in favor of hysterical and one-sided coverage of the protests in Hong Kong. Another widespread belief among Westerners is that they are exceptional in that their systems don’t permit the creation of “propaganda”, whereas that is the only thing the journalists of most other nations can do, especially nations like Russia, Iran, Syria, etc.
If the world believed that the French system of governance was exceptional, then the repression of the Yellow Vest movement should forever silence that false claim. It has been eight months: their media system obviously cannot report on domestic political repression, and their political system can obviously perpetuate domestic repression with an impunity unparalleled in the world. In no other country has such regular, political repression occurred this century.

This ability to inflict such record-breaking repression while talking passionately about liberté - and being believed at home and abroad! - is the true “French exceptionalism”, and it is nothing to boast about or emulate.

Western propaganda has shut down all criticism of French repression in favor of hysterical and one-sided coverage of the protests in Hong Kong. Another widespread belief among Westerners is that they are exceptional in that their systems don’t permit the creation of “propaganda”, whereas that is the only thing the journalists of most other nations can do, especially nations like Russia, Iran, Syria, etc.

One thing about exceptionalists is their certainty of its permanence: it seems that once one is exceptional, one can never stop being exceptional, no matter how immorally one acts. Exceptionalism, once bestowed by God, can never be subject to a Day of Judgment, apparently. It’s a, uh, “unique” view….

Undoubtedly, the necessarily corollary to exceptionalism’s assertion that “We are different” is rarely stated but extremely important in order to understand the exceptionalist’s mindset, and it is: “while all the rest of you idiots are all the same”.

Those in the developing world are told that there is an enormous difference between Belgians and the English, for example. Even though the former is merely a peninsula of the latter, what a mighty chasm separates the Danes and the Germans! Yet in France all Blacks are just that - Blacks - even though they hail from parts as varied as West Africa, Madagascar and the Caribbean. In the US all Latinos - whether from the southernmost tip of Tierra del Fuego or Boston - are painted with the same brush. Of course, in both countries Muslims are certainly all “Arabs”. This total nonsense illustrates an obsessive self-esteem which necessarily strains cooperation, diplomacy and true tolerance.

A difference between US and French claims for their own exceptionalism is that the US believes it is exceptional lock, stock and barrel, yet the French are more likely to claim their “cultural exceptionalism”.

It takes a bit of experience here to figure that out, but what they mean is that “White French culture” is exceptional: any influences from the nearby Muslim world, or anything their neo-imperial subjects might bring, or even the neighbouring Anglo-Saxon world - all are second-rate and somehow corruptive of an exceptionally wonderful culture which must never change.

What especially galls nations like Iran and many, many others regarding French exceptionalism are two things: 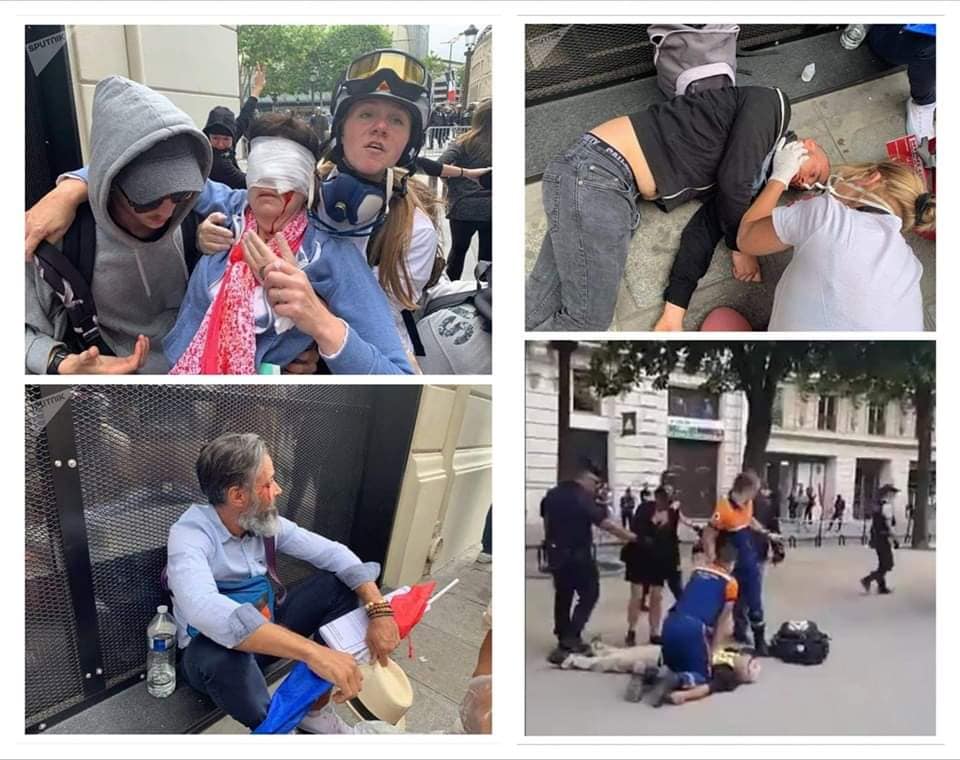 France claims to especially honor human rights… and yet how do we explain the the Yellow Vest repression? This was after we were told to believe that their bombs in Libya, their guns in the short-lived Islamic State of Iraq and the Levant, and their rapes in the Central African Republic are “humanitarian interventions”. We also were disgusted by the deification of the dangerous magazine Charlie Hebdo, which made millions by publishing Islamophobic pictures but never publish an anti-Jewish one.

It boggles to mind to think of the weight of the cognitive dissonance which France’s political and cultural elite must bear in their minds: they regularly imprison hundreds of protesters in the morning, and then in the afternoon talk about France being a beacon, champion and even the inventor of human rights.

It is simply intolerable to get lessons on human rights from a nation which so clearly violates them; it is intolerable because all nations must converse diplomatically, and yet France believes they can continually disrespects everyone else’s intelligence and get away with it.

Secondly, Iran is a nation which has been under hot and cold war for 40 years, therefore they have been truly living in wartime conditions, forced to have a true state of emergency in the past, and endure vast suffering caused by an illegal, homicidal blockade which aims to provoke either civil war or all-out war. France, however, suffers none of these hardships, and yet are more homicidal by multiple orders of magnitude.

How can Iran have such a very poor image and France such a positive image, given the former’s unjust handicaps and the latter’s lack of restraint, common decency and refusal to cooperate? Part of it is Iranophobic propaganda, and the other part is propaganda which champions the alleged legitimacy of “French exceptionalism”.

However, current anthropological scholarship is finally shedding their West-centric blinders to realise that France is not at all the “birthplace of human rights”: the conception of individual rights in today’s West was yet another resource stolen from the American Indians, namely the Iroquois Confederacy in the northeastern US. This fascinating subject, which academics simply must study,certainly seems logical - where was the conception of individual freedom in France’s long history of an absolute monarchy which was as absolute as anywhere in Europe? They obviously learned it from someone else, namely the Indians they came into contact with. To me, the Iroquois seemed to be about as freedom-loving as your average, ever-roaming Iranian nomad, but the point here is not to make exceptional claims about who invented human rights - the point is: the French did not invent them, as they claim.

It is inherent in countries which assert their exceptionalism - and perhaps in all Western Liberal Democracies - to deny shared authorship of the world’s many fine ideas and concepts, as they endlessly promote individualism and do not prize the communal, collective spirit.

I can report that those incredibly brave Yellow Vests who are still protesting - in the face of all the guaranteed state violence - repeatedly tell me what respect they have for Iran and its modern governmental system. They routinely tell me what shame they have in their own government. Indeed, the Yellow Vests are the new, courageous political vanguard of France. Unlike the French 1%’s support of aristocratic Western Liberal Democracy, Yellow Vests display French values which are in common with those around the world: solidarity, bravery, faith and self-sacrifice.

If the Yellow Vests could ever win political or cultural power they would certainly end the hypocrisy of “French exceptionalism”, which they correctly see as an unwanted yoke which only perpetuates France’s ongoing domestic repression.

The French have a fine saying: “One time does not make a custom.”

However, eight months does. The Yellow Vests obviously cannot be distracted with the false pride of “French exceptionalism” - they are busy defending themselves from the carnage such arrogance inevitably provokes.

Rugged Individualism Cannot Save Us. Only Enlightened Collectivism Can.

Xinjiang is Chilling Out (Update)

Doves Die in Ukraine: When Did Liberals Turn...

Is Elon Musk liable to be part of...

Doves Die in Ukraine: When Did...