The U.S. Stunt In Hong Kong Will Make Other Issues More Difficult 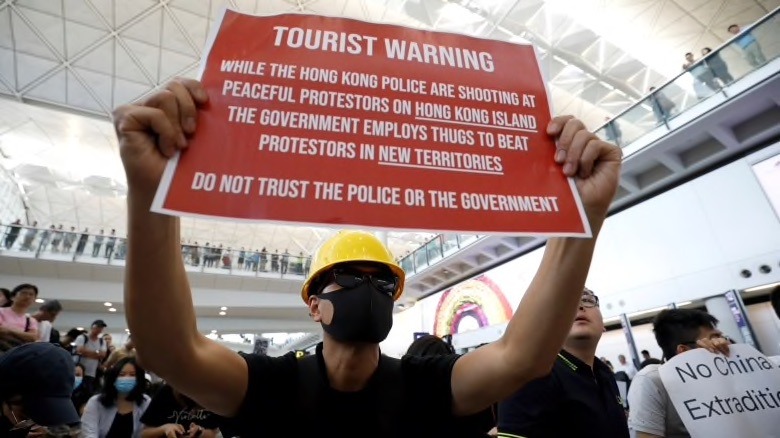 A Hong Kong protester paid or incited by Western agents demonstrating his alienation from Beijing. A similar color revolution stunt is being tried in Russia, again, as the West seeks to destabilise the coalescing sino-russian alliance.

The current attempt of a U.S. instigated color revolution in Hong Kong is failing:

Protesters wearing all black streamed through the Yuen Long area, even though police refused to grant permission for the march, citing risks of confrontations between demonstrators and local residents.By nightfall, protesters and police were once again facing off in the streets, as they've done previously during the summer-long pro-democracy protests in the Chinese territory. Demonstrators threw objects and ducked behind makeshift shields, and police officers shot plumes of tear gas into the air.

In May the chief organizer of the demonstrations met with U.S. leaders:

Lee founded the first pro-democracy party in Hong Kong in 1990 and has been a prominent voice calling for civil liberties for the city’s residents.

Lee and other U.S. stooges organized large demonstrations against an extradition bill which would allow the government to send people who committed crimes in mainland China, Taiwan and Macau to those provinces where the crime was committed to receive their punishment. Hong Kong already has similar agreements with foreign countries.

Since then the government of Hong Kong temporarily pulled the bill back. The protest movement immediately diminished. But a core of black-clad students, influenced by the U.S. paid leaders, is trying to keep the struggle up. Throughout the last weeks they broke into the parliament building and ransacked it. They defiled family graves or pro-Chinese politicians, attacked police lines, harassed elderly arrivals (vid) at Hong Kong's airport and today, during an illegal demonstration, destroyed a car which they falsely believed to have a Chinese mainland owner.

Their aims are clearly unachievable and racist nonsense: 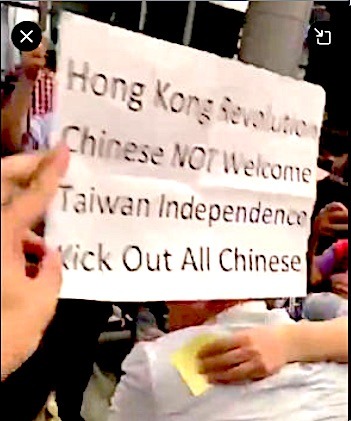 Considering the brutal and humiliating treatment of China at the hand of America and Europeans, what kind of brainwashed imbecile wold hold a sign like this?

Such behavior and slogans will only diminish the popular support they might have received otherwise.

That the U.S. is behind these riots can also be seen in the slanted coverage the riots receive in 'western' media. The picture they draw is incomplete:

Unable to defeat the bill legislatively, Hong Kong's pro-Western opposition has taken to the streets. With the help of Western media spin - the illusion of popular opposition to the extradition bill and Beijing's growing influence over Hong Kong is created.  What is not only omitted - but actively denied - is the fact that the opposition's core leaders, parties, organizations, and media operations are all tied directly to Washington DC via the National Endowment for Democracy (NED) and corporate foundations like Open Society Foundation.

Hong Kong has 7.5 million inhabitants. While demonstrations of several ten thousands seems big, they does not represent a majority. The so called 'pro-democracy' parties in Hong Kong have lost in each and every local election. The pro-China parties always receive a majority of votes.

Hong Kong was once the exclusive 'door to China'. It lost that status when China opened up for trade. Today a number of much larger cities within the mainland are way richer and more important. Hong Kong has little influence on what happens elsewhere in China. The temporary special status it received after Britain's colonial rule is of little concern. Most people in Hong Kong recognize that. They know that their economic well being now depends on Beijing's good will.

The U.S. may believe that the circus it creates with these student stunts might push China into doing something harsh. But the mainland is not concerned about such nonsense. It already knows how this will end:

“Trying to seize the opportunity to incite chaos in the Hong Kong Special Administrative Region does not have popular support and will not be successful,” [Chinese Foreign Ministry spokesman Lu Kang] said.

The students who were instigated to commit violence and crimes will go to jail. The extradition bill will be reintroduced at a convenient time and pass Hong Kong's legislative council with a large majority.

As that outcome was totally predictable one wonders why the Trump administration bothered to launch such nonsense. It will only make it more difficult to solve other problems, like North Korea or global trade, over which China has influence.

About the Author
"B' or Bernhard, is the pseudonym for Moon of Alabama's chief correspondent and founding editor.

What Progressives Hopefully Learned From Russiagate