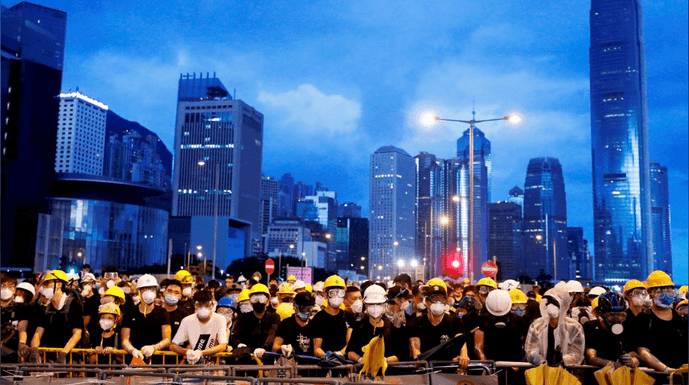 The thrust of these Western-instigated uprisings is invariably to destabilise geopolitical rivals or targeted nations, never to help their populations, even assuming the charge of tyranny is real.

[dropcap]T[/dropcap]he popular Western mainstream media outlet Reuters published a very misleading piece over the weekend that deceptively described the latest events in Hong Kong as a "cycle of violence," inaccurately implying that the recent disturbances are partially the fault of the city's police.

The article, "Protesters clash in Hong Kong as cycle of violence intensifies," paints a sympathetic picture of the rioters who have tried to wreak havoc across the municipality over the past two months while ignoring the commendable restraint and patience of the law enforcement representatives tasked with keeping the peace.

The subtext is that the police's supposedly excessive response to the so-called protesters is contributing to a "cycle of violence," suggesting that the city should just stand back and let rioters run wild across town until they finally get what they want.

That would be absolutely irresponsible because no country – including Western leaders such as the U.S. and France – would allow such a scenario to materialize since it's the responsibility of the state to keep the majority of law-abiding and peaceful citizens safe from the violent vanguard of political radicals who are attacking public property, disturbing the peace and intimidating others.

The deplorable events of early July are etched in everyone's mind after hooligans stormed the legislative building, vandalized the premises and even raised the city's colonial-era flag in the clearest sign yet of their regressive political agenda, yet even then the police reacted responsibly and went to great lengths to ensure that the situation was defused as peacefully and realistically as possible under those tense circumstances.

Instead of lauding law enforcement representatives for their professional handling of the situation, Western mainstream media outlets spun conspiracy theories speculating about why the police didn't use more forceful means.

Evidently, many Western political observers have been unpleasantly surprised by how the city has dealt with recent events, hence why Reuters, for example, is now trying to imply without any evidence whatsoever that law enforcement representatives are partially responsible for a "cycle of violence." 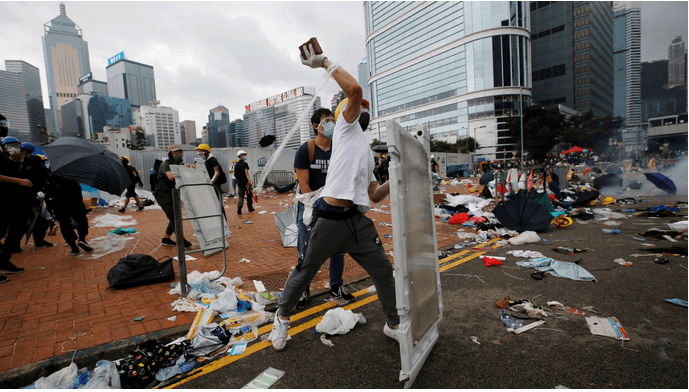 In an image distributed by Reuters, a protester is seen throwing a brick during a demonstration against a proposed extradition bill, in Hong Kong, China, June 12, 2019. Decontextualised images like this can be easily weaponised by the West to defame its intended targets.

This is a similarly deceptive narrative as the one that's regularly propagated against the authorities in many non-Western countries whenever politically motivated protests in the main urban areas descend into anti-state violence and rioting, making it seem like the same perception management playbook is now being applied against Hong Kong.

According to the established pattern, a "trigger event" usually takes place which provides the masterminds of the planned unrest with the "international plausible" pretext to commence their destabilization operations.

A small minority of the protesters are actually anti-state radicals who then try to violently provoke the police into responding in kind, after which the law enforcement representatives' actions are decontextualized, misreported and then propagated through selectively edited footage on mainstream and especially social media platforms in order to spread a completely false perception of the events that just took place.

The intent is to manufacture the artificial narrative that the state is using excessive force against peaceful civilian protesters, which instantly attracts biased international media coverage and could contribute to misleading other citizens into participating in increasingly larger demonstrations, during which time they could be exploited as de-facto human shields by nearby rioters who are trying to provoke a forceful response from the police that they know might unwittingly injure others as collateral damage.

This is the real cycle of violence that's occurring and the true culprits behind it, not the one that Reuters implied is partially the state's fault.

Going forward and judging by the distorted way in which many Western mainstream media outlets are reporting on the latest incidents in Hong Kong, one can predict that this deceptive perception management trend will probably continue into the future since it's driven by hostile political motivations.

In fact, one can even go as far as describing it as a "cycle of media violence," since those outlets are tacitly supporting the rioters by encouraging the continuance of their criminal actions, which makes them much more culpable for what's taking place than the police are because they're literally waging psychological warfare to provoke more unrest.

(If you want to contribute and have specific expertise, please contact us at opinions@cgtn.com.)

About the author(s)
Editor's note: Andrew Korybko is a Moscow-based American political analyst. The article reflects the author's opinions, and not necessarily the views of CGTN.

Deer Caught In The Headlights

How The Question “Who Benefits From This?” Can Change Your Life