Home ABOMINATIONS The Nature of the ( Absentee Landlord) Beast

The Nature of the ( Absentee Landlord) Beast

August 4, 2019
BE SURE TO PASS THESE ARTICLES TO FRIENDS AND KIN. A LOT DEPENDS ON THIS. DO YOUR PART.

Landlords and the rentier class have been long the object of hatred and contempt by ordinary people and crusading writers like Dickens or Lincoln Steffens.

[dropcap]N[/dropcap]o politician from either of the Two Party/One Party imbroglio will ever mention anything about this Absentee Landlord disgrace. Sadly, absentee landlords have been with us since time immemorial. These people were even mentioned in the story of Jesus in the New Testament. It seems everybody just accepts that people have a right to own property and rent it out to others who are in need of shelter. But making a profit on someone else's critical want of a place to live is what ' Makes Amerika Great Again' , right? No, wrong!

This writer, before finally being able to afford my own home at the age of 45, always lived under the thumb of a landlord. For God's sake, even the term Landlord comes straight out of Feudalism! The lord of the manor rented out parcels of his land to house the serfs who worked his property, or in some cases his coal mine ( See the great 1993 Claude Berri film Germinal). In the fine 1987 John Sayles' film Matawan, practically the whole town of Matawan WV was owned by the coal company, and the miners all lived in cheaply built rental housing owned by the company. To add insult to this economic injury, they were logistically forced to shop at company stores using company script to purchase necessities at too high prices. Such is how feudalism operated, always, in the case of Matawan, under the guise of a ' free market' for labor. Horseshit!

At my first marriage, we rented the ' walk in ' apartment of a two family house owned by an absentee landlord. This was in Brooklyn N.Y and our illustrious landlord lived in New Jersey. As shared in a previous column of mine, one day my wife told me that while she was giving a bath to our baby boy, there were giant bugs coming out of the drain. I immediately called Frank, the landlord (a fellow Italian-American, but ethnic ties mean squat to landlords) and told him of this problem. He was reassuring by telling me that he would come by over the weekend and put some Chlordane down the drain to solve the problem. 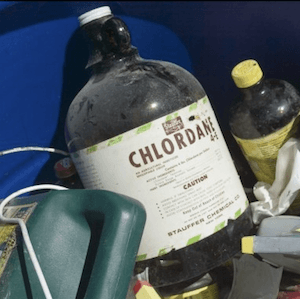 Chlordane is a chemical compound and also part of a similarly named pesticide mixture resulting from synthesis (main components- heptachlor, chlordane, and nonachlor). These highly chlorinated cyclodienes were classified as organic pollutants hazardous for human health.

After we hung up, I made a few calls to friends who knew more than me about these things. I was told that Chlordane was banned for use in the state of New York, but not yet in New Jersey. I called Frank back and told him this fact. He laughed. " Well kid, I use it here in all my properties. No big deal." Well, to me it was a big deal. " You got kids Frank? Use it in the bathtub they use, not in my tub!"

Years later my new wife and I rented an apartment from an absentee landlord who owned 19 such properties in the New Hyde Park, Long Island area. This was an old , I mean old house that at one time was a one family home. It was made into two apartments, and we rented the larger one, which was upstairs. The rent then, in 1992, was around $ 1000 a month. It was an 800 square feet place, advertised as a ' Three bedroom' . Well, my stepdaughter's room was so tiny that the door would not close, as it banged into her bed. The bathtub had tiles chipping off the wall and into the tub. The refrigerator was so old and inadequate that I joked about it , saying it had arthritis. The stairway to our apartment had no banister, so my aging parents could not visit me. The landlord expected me to shovel snow. After the first major snowfall, I called him up. I asked him what he was going to do about the foot of snow outside. He told me it was my responsibility. I told him that I had a bad back and could not do it, and if he refused to do so, I was going to call the town's code enforcement office and put in a complaint. His son appeared within the hour with a snow blower.

We finally left N.Y and moved to Indianapolis, so my son could attend college and we could finally afford  a home. We decided to rent for a year to see how we liked things. An ad took us to this giant rental property with hundreds of units. The model apartment looked fabulous! The buildings all looked freshly painted and clean. We signed a one year lease in late November. About two weeks later, my wife was at the kitchen sink when the faucet just exploded apart, and water was streaming out! A day later there was this really big rainstorm. We were sitting in the living room watching television and the ceiling just began to fall onto the floor, as the rain water poured down on us! The same thing happened in our bedroom, with the water soaking up the wall to wall carpet. I was really pissed! After I had the site manager come down from Chicago to check things out ( Yes, the corporation that owned this and other rental properties was not even from Indiana), I told him we were ' Out of there' and he needed to waive the lease restriction. This is after I told him I was going to the newspapers, my city councilman, the state Attorney General, the radio stations... by then he waived the lease and asked how soon we could leave. The sad reality is that this Chicago corporation had just purchased the site, which I found out had been an old and dilapidated one. They cleaned it up with fresh paint and new but really inferior kitchen and bathroom fixtures, and Wallah!!! Of course the roofs were from the old days, and thus heavy rains and snow would do what was done to our apartment.

Today, 2019, we see a resurgence of more and more absentee landlords nationwide. With the ' new' rise of home prices after the abyss of the 2008 Subprime crash ( of which both the government and Wall Street predators helped exacerbate) it seems everyone and his brother seem to want to be investors... on other people's basic need for shelter. Mega corporations like the Blackstone Group have been buying up cheapened properties, many of them in foreclosure, ever since the bubble burst in 2008. They then convert them into rental properties... many times renting to the very folks who were evicted. As told in a previous column, I had a friend who got a job working for his friend's dad. He related this to me: " His dad had investors who formed a partnership to buy up foreclosed and abandoned homes, mostly in poor areas of big cities like Detroit. They then put an ad on Craig's List, and keep a sign in the yard saying ' Rent to buy'. They hired me to take the phone calls. I would rattle off the conditions which were A) needing the prospective renter to have a verified job, B) putting up $ 1000 and agreeing to move in ' As Is'. All repairs and renovations were left to the renter to choose to do... and of course pay for. The rent was usually whatever other similar home renters were paying in that area; C) There was a monthly 8% charge on top of the rent charge; D) After 20 years the renter then owned the house."

Postscript- I called my friend a year later and he told me what his friend's dad's company was doing with those rented homes. " Oh, they bundled the agreements and sold them to Wall Street for investment."

And the hits just keep on coming!!