A dispatch from TeleSur 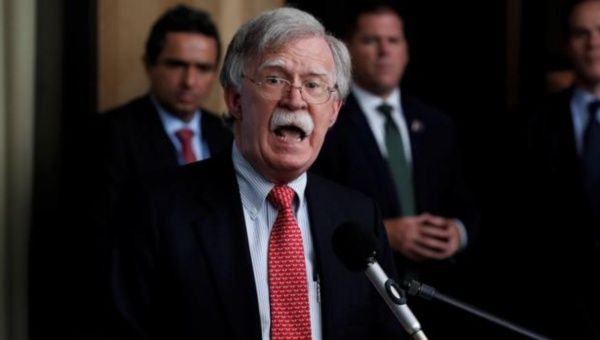 Miserable henchman John Bolton, "security advisor" to the US ruling plutocracy, is a serious threat to world peace and should be treated as such. Trump has appointed him to lead the charge against a sovereign Venezuela. (EFE)

"We oppose the extraterritorial application of unilateral measures."

The European Union said Wednesday it rejected new moves by the White House to impose a total blockade on Venezuela. Though the EU has also placed sanctions on the elected government of Venezuela, they oppose U.S. attempts to extend the sanctions ‘extraterritorially’.

Venezuela Denounces the 'Imperialist' Total Blockade by US

The comments were made in reference to this week's U.S. measures, issued as part of an executive decree, that formally extend sanctions outside Venezuela, to include Venezuela’s public assets in the United States.

It will be a nice day when the cowardly West European vassal politicians finally grow a spine and kick Washington out of their countries' affairs. —Editor

Gordejuela also said the EU believes that the solution must be found through elections in "the shortest possible term". The EU has also taken a different approach to the U.S. on the issue of the peace talks between the government and opposition that are being sponsored by Norway.

Gordejuela said the European bloc hopes the talks are successful and would refrain from further sanctions if the two sides in Venezuela reached an agreement.

Meanwhile, the U.S. approach is one where Washington seeks to place further sanctions as a means of destabilizing the talks.

The comments represent a small change in rhetoric, which has so far been supportive of the U.S. attempts at regime change in Venezuela. The EU has applied its own sanctions, and its appointed chiefs voiced their support for self-declared lawmaker Juan Guaido.

The EU's position comes as yet another difference between the EU and the U.S., adding to a number of issues, including the Iran nuclear deal, which the EU helped draft and which the U.S. has unilaterally withdrawn from.

Another area of contention has been the U.S. insistence that European countries abolish their taxes on big tech companies, many of whom are U.S. based corporations. The White House has threatened France with trade tariffs if they failed to do so and told the U.K. that there would be no trade deal if the U.K. didn't scrap the tax.

In June, Russian President Vladimir Putin urged Europe to recognize the huge economic cost that U.S. sanctions have had on European countries and their ability to trade internationally, placing the cost to Europe at over US$200 billion since 2014.