A Dispatch from TeleSur 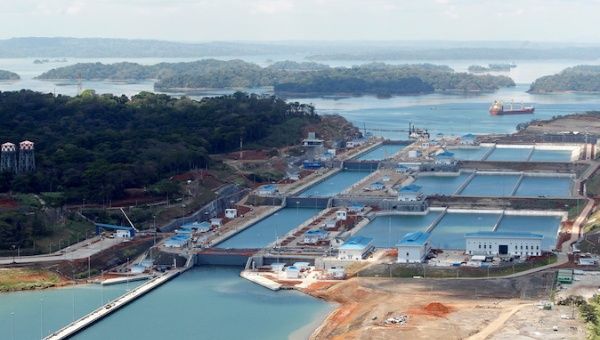 Aerial view of the new Panama Canal expansion project on the outskirt of Colon City. | (TeleSur)

The ship was seized in the Panama canal according to the Venezuelan government.

Venezuela’s Vicepresident Delcy Rodriguez denounced Wednesday that a ship containing 25 thousand tons of soy-made products has been seized in the Panama Canal due to the U.S. blockade while calling on the United Nations to take action against the "serious aggression" that impede Venezuela "right to food".

"Venezuela denounces before the world that a boat that holds 25 thousand tons of tons of soy, for food production in our country, has been seized in the Panama Canal, due to the criminal blockade imposed by Donald Trump," the vice president said in a tweet.

"Venezuela calls on the UN to stop this serious aggression by DonaldTrump's govt against our country, which constitutes a massive violation of the human rights of the entire Venezuelan people, by attempting to impede their right to food."

In a subsequent tweet, the Venezuelan senior official explained that the owner of the vessel carrying the merchandise of food was informed by the insurance company that it was prevented from moving that cargo to Venezuela.

The shipment seizure comes just days after Trump signed an executive order Monday that imposes a near-total blockade on government assets in that country, which includes an embargo against food suppliers, among other basic inputs. This is the first time in 30 years that Washington has taken such an action against a sovereign country.

Sociopath Trump: No crime is too big for this gangster and his gaggle of thugs. But other presidents were no less criminal, just less obvious in their perfidy.

Little Was Changed By The First Round of...