August 12, 2019
Please make sure these dispatches reach as many readers as possible. Share with kin, friends and workmates and ask them to do likewise. 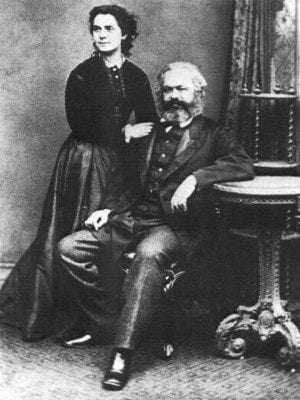 Editor’s Note: Well, what do you know! Now even outposts of capitalist ideology such as Bloomberg recognise that capitalism inexorably engenders inequality at a vertiginous rate, with fortunes growing in feedback loops at a clip that makes the whole system inherently and, most relevant to this discussion, unstable, not to mention chaotic and totally undemocratic.

Never mind that genuine leftists, beginning with Marx and Engels, the first scientific socialists, said so almost 200 years ago and that other leftists have continued to point out this peculiarity of capitalism, its Achilles Heel. The core of the problem is summed up in the system’s central contradiction, derived from capitalism’s exploitative genes firmly embedded in deep class divisions, and not amenable to solution unless capitalists (read: today’s billionaire class) agree, of their own volition, to euthanise themselves and stop being capitalists. The old boy himself put it rather nicely (and accessibly):

At a certain stage of development, the material productive forces of society come into conflict with the existing relations of production or – this merely expresses the same thing in legal terms – with the property relations within the framework of which they have operated hitherto. From forms of development of the productive forces these relations turn into their fetters. Then begins an era of social revolution.  (Karl Marx, 1859 Preface to A Contribution to the Critique of Political Economy)

So the capitalists’ social, and, above all, political problem (as production is no longer an issue due to advances in science and technology) is the privately owned megacorporation’s built-in unresolvable tension (contradiction) between modern industrialism’s capacity to produce and the stingy way in which the ouput is distributed, a mode that resembles more and more a form of neofeudalism.

Indeed, while modern industry, incorporating ever more efficient labor-saving technologies, produces a truly bewildering mountain of goods and services each year, the actual producers, the workers who make all this cornucopia possible, receive only a miserable portion of the social income, making it impossible for the system to remain “in balance”.  Without getting too technical, or quoting Keynes in detail, let us just say that capitalism has a “consumption deficit” entrenched in its social relations of production, which impedes the workers from buying back the value of what they just produced. And this shortfall is not fixed or alleviated by the lavish spending of the rich, since, as JM. Keynes demonstrated, their “propensity to consume” is always far less than 100% of what they receive, devoting much of their income to speculation or other forms of parasitic “investments”. Under such circumstances the system totters, and eventually crumbles (recessions, depressions, “Busts” of the legendary “boom & bust” capitalist roller coaster) while many go without basic necessities in a regime of literal abundance.

In the 21st century, with capitalism turbocharged by the digital revolution and neoliberalism backed up by a lawless global empire, the ballooning of personal and dynastic fortunes has reached such extravagant extremes that it cannot be swept under the p.r. rug any more, even if armies of system apologists and sycophants work overtime to explain away in a satisfactory manner what can no longer be denied. Grotesque wealth—unearned income, as even the very capitalist US IRS calls it— has finally become a very visible pink elephant in the room. An embarrassment, but more than that, a threat to the reigning regime of cancerous inequality. This is now the main vector propelling the crisis of legitimacy in “the West”, as the majority of the population must do acrobatics to stay afloat, while social toxicity expands inexorably, product, in every “capitalist democracy”, of a rotten leadership structure beholden to the global plutocracy rather than the majorities that supposedly elected them.

Below some excerpts from an eloquent piece found on Bloomberg.

—Patrice Greanville
Main feature image: The Walton heirs, combined fortune estimated at USD$191 billion, but all big fortunes escape exact measurement due to the numerous ways the rich can hide their true wealth. 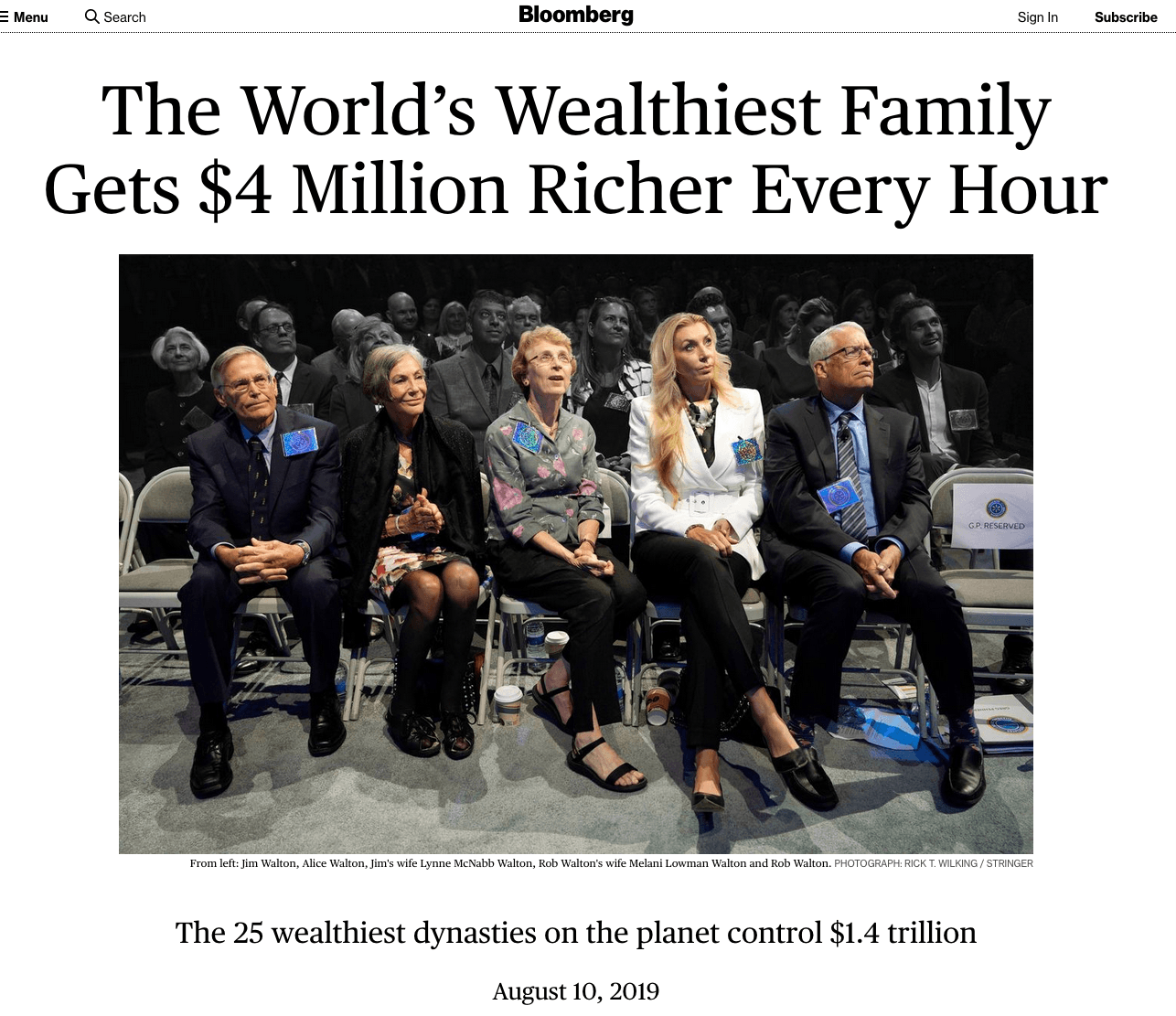 That’s how quickly the fortune of the Waltons (see picture above), the clan behind Walmart Inc., has been growing since last year’s Bloomberg ranking of the world’s richest families.

At that rate, their wealth would’ve expanded about $23,000 since you began reading this. A new Walmart associate in the U.S. would’ve made about 6 cents in that time, on the way to an $11 hourly minimum.

Even in this era of extreme wealth and brutal inequality, the contrast is jarring. The heirs of Sam Walton, Walmart’s notoriously frugal founder, are amassing wealth on a near-unprecedented scale — and they’re hardly alone.

The Walton fortune has swelled by $39 billion, to $191 billion, since topping the June 2018 ranking of the world’s richest families.

Other American dynasties are close behind in terms of the assets they’ve accrued. The Mars family, of candy fame, added $37 billion, bringing its fortune to $127 billion. The Kochs, the industrialists-cum-political-power-players, tacked on $26 billion, to $125 billion.

So it goes around the globe. America’s richest 0.1% today control more wealth than at any time since 1929, but their counterparts in Asia and Europe are gaining too. Worldwide, the 25 richest families now control almost $1.4 trillion in wealth, up 24% from last year.

To some critics, such figures are evidence that capitalism needs fixing. Inequality has become an explosive political issue, from Paris to Seattle to Hong Kong. But how to shrink the growing gap between the rich and the poor?

As the tension increases, even some billionaire heirs are backing steps such as wealth taxes.

“If we don’t do something like this, what are we doing, just hoarding this wealth in a country that’s falling apart at the seams?” Liesel Pritzker Simmons, whose family ranks 17th on the Bloomberg list, said in June. “That’s not the America we want to live in.”

A notable addition this year: the Saudi royal family.

The House of Saud is worth $100 billion, based on the cumulative payouts royal family members are estimated to have received over the past 50 years from the Royal Diwan, the executive office of the king.

That’s a lowball figure. After all, oil giant Saudi Aramco, the linchpin of the Saudi economy, is the world’s most profitable company. The kingdom is hoping to take it public at a $2 trillion valuation.

Tallying dynastic dollars isn’t an exact science. Fortunes backed by decades and sometimes centuries of assets and dividends can obfuscate the true extent of a family’s holdings. The net worth of the Rothschilds or Rockefellers, for instance, is too diffuse to value. Clans whose wealth is currently unverifiable are also absent.

But of those we can track, most are reaping the rewards of ultra-low interest rates, tax cuts, deregulation and innovation. Koch Industries, for instance, has a venture-capital arm. The latest generation of Waltons is establishing its own enterprises.

READ THE WHOLE ARTICLE ON BLOOMBERG