August 12, 2019 9 minutes read
Please make sure these dispatches reach as many readers as possible. Share with kin, friends and workmates and ask them to do likewise. 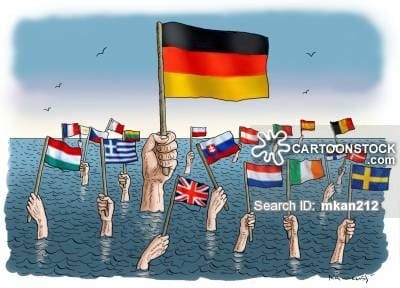 “German industry is in the deepest slump since the global financial crisis, and threatens to push Europe’s powerhouse economy into full-blown recession. The darkening outlook is forcing the European Central Bank to contemplate ever more perilous measures.

“The influential Ifo Institute in Munich said its business climate indicator for manufacturing went into “free fall” in July, as the delayed damage from global trade conflict takes its toll and confidence wilts. It goes far beyond the woes of the car industry. More than 80pc of Germany’s factories are in outright contraction.”

Why? What is going on here? It seems that, though other European member-states used to be Germany’s largest market, Germany’s first and third largest export destinations are now the US and China, respectively. Together, they account for more than 15% of all outbound German trade activity. More than 18% of Germany’s export goods ended up somewhere in Asia. Therefore, Germany’s industrial struggles in 2019 point the finger in the direction of its external focus, which means the US, China, and Asia – i.e. its largest marginal trade partners. And the principal assailants in today’s trade and tech wars.

Clemens Fuest, the Ifo president, says: “All the problems are coming together: It’s China, it’s increasing protectionism across the board, it’s disruption to global supply chains”.

But if Germany’s manufacturing woes were not sufficient in and of themselves, then combined with the threat of trade war with Trump, the prospect indeed is bleak for Europe: And the likelihood is that any of that ECB stimulus – promised for this autumn, as Mario Draghi warns that the European picture is getting “worse and worse” – will be very likely to meet with an angry response from Trump – castigated as blatant currency manipulation by the EU and its ECB. EU Relations with Washington seem set to sour (in more ways than one).

But there is more: Speaking in the German parliament, Alice Weidel, the AfD leader, tore into Chancellor Merkel for her, and Brussel’s, botched handling of Brexit (for which “she, Merkel bears some responsibility”). Weidel pointed out that “the UK is the second biggest economy in Europe – as big as the 19 smallest EU members combined”. “From an economic perspective, the EU is shrinking from 27 member-states to 9. In the face of such an enormous event, the EU reaction verges on a pathological denial of reality … [they should recall] that German prosperity and jobs are at stake here. It is clearly in Germany’s interest that trade and investment continue unhindered. But, out of blind loyalty, you [Merkel], follow France, which wants to deny Britain access to the Single Market. Yes, you [Merkel] are considering not allowing Britain access to the European Economic Area, because France does not want it. [Sarcasm] that would be too much: Too much free trade; too much fresh air in the markets … France with its failed industrial policy serves as [the new] blueprint [for the EU]”. (See video here).

Weidel’s last point is key: She is implying that Macron is positioning himself to eclipse Merkel as the EU leader on the waning of the Chancellor’s influence and credibility. Macron intends to impose instead, the “failed” French industrial model, to Germany’s disadvantage, Weidel suggests.

She is not alone in this suspicion. Trump too, dislikes any prospective Macron take-over of the EU leadership that will (almost certainly) be more hostile to any trade agreement with the US (especially on agriculture), and which would open French industry to US competition. Hence Trump’s riposte (on French wine) in retaliation to France’s new taxes on US tech firms – contributing little, or nothing, to the French Treasury. Trump is enlisting too in the battle for the future shape of Europe. It is going to be a battle royal.

A major threat to the EU now emanates from the least anticipated direction – from the US. At no point did European leaders consider their project as a challenge to US power. Rather, they saw progress in their careers as contingent on receiving the US approval. Consequently, they deliberately chose not to found the Euro in anything other than within the dollar sphere. They never considered the possibility that the United States might change attitude. And now – suddenly – the EU finds itself exposed to all manner of sanctions through the Euro’s close vulnerability to dollar hegemony; from a possible trade and tech war between Europe’s two key trading partners; and even a falling-out as a result of a changing US defence calculus. Steering a course between the US and China will challenge deeply Europe’s imbedded cultural predisposition.

Weidel also warns the German Parliament that that the biggest consequence for Germany from Brexit is not just its exports, but rather, without the UK as a EU member, Germany will lose its ability to assemble a blocking majority (35%) in Council: And, absent this ability to block, Germany may not be able “to stop the crisis-ridden, Club-Med States and France, from reaching into community funds”.

This goes to the crux of the European crisis: an accord rooted in Germany’s traumatic experience of the inter-war hyper-inflation; in the Great Depression of the 30s; and to the social erosion to which it led. To exorcise these ghosts, Germany deliberately painted the EU into an automatic system of austerity ‘discipline’– enforced through a German surveilled, Central Bank (the ECB). The whole was ‘locked-fast’ in automaticity (i.e. in Europe’s ‘automatic stabilising mechanisms’). This was conceded by other European states (the core accord), since it seemed the only way (it was said), that Germany would agree to put its revered ‘Ark’ of the then stable Deutsche Mark, into the common ‘pot’ of the ECM system.

“How [then] did Europe manage to follow a common monetary policy … with an European Central Bank, explicitly … set up to give each country an equal voice, and yet satisfy the German demand for assured monetary rectitude? The answer was to put the new system on autopilot, pre-programming it to do what the Germans would have done if they were still in charge.

First, the new central bank – the ECB – would be made an autonomous institution, as free as possible from political influence. Second, it would be given a clear, very narrow mandate: price stability, period – no responsibility at all for squishy things like employment or growth. Third, the first head of the ECB, appointed for an eight-year term, would be someone guaranteed to be more German than the Germans: W. Duisenberg, who headed the Dutch central bank during a period when his job consisted almost entirely of shadowing whatever the Bundesbank did”.

Krugman is too polite to say it explicitly, but it never was a common policy. It was German control, hidden in stabilising mechanisms, designed by Frankfurt. The loss of this mechanism is what is frightening man of the German élite.

And Macron has just exploded that original Franco-German compact through putting a French woman (Lagarde) in charge of the ECB; a self-declared Federalist (“I want a United States of Europe”) as EU Commission President, and a Brexit hawk as President of the EU Council. Macron’s triumph over Merkel is intended to de-throne Germany. And a punishment Brexit – both to weaken Germany, and to sap Germany’s voting power at the Council – as well as the satisfaction of seeing a chastised Britain being chased from out of the EU.

So Macron is ushering in his notion of a closer centralised European governance – but who is to pay for it now? Without Germany’s former level of contributions and Britain’s input as a major contributor nation, the EU can neither reform itself (since many reforms would require Treaty re-writes), nor afford itself.

And wide political discontent to the Macron formula is already baked in for the future, as Frank Lee notes:

“Those Eastern European states which emerged from the break-up of the Soviet Union had been led to believe that a bright new world of West European living standards, enhanced pay levels, high rates of social mobility and consumption were on offer.

Unfortunately, they were sold an illusion: the result of the transition so far seems to have been the creation of a low-wage hinterland, a border economy on the fringes of the highly developed European core; a Euro version of NAFTA and the maquiladora, i.e., low tech, low wage, low skills production units on the Mexican side of the US’s southern borders”.

And we are not talking ‘just Latvia’: For many in the East of Germany (the AfD’s electoral heartland), German unification in 1990 was not a merger of equals, but instead an “Anschluss” (annexation) with West Germany taking over East Germany. Reasons for East German disenchantment can be seen everywhere: The eastern population has shrunk by about 2 million, unemployment has soared, young people are moving away in droves, and what was one of the Eastern Bloc’s leading industrial nations is now largely devoid of industry.

And here lies the kernel of the crisis. There has been a call from all sides to try something different: such as relaxing the fiscal rules that are destroying public services; or, more daringly, to touch the ‘holy grail’: of reform of the financial and banking system.

But here is the rub: All such initiatives are prohibited in the locked-down treaty system. Everyone might think to revise those treaties. But that is not going to happen. The treaties are untouchable, precisely because Germany believes that to loosen its hold over the monetary system will be to open Pandora’s Box to the ghosts of inflation and social instability rising, to haunt us anew. Weidel was very clear on this danger.

The reality is that the European ‘lock-down’ derives from a system that has willfully removed power from parliaments and governments, and enshrined the automaticity of that system into treaties that can only be revised by extraordinary procedures. No one in Brussels sees any prospect of ‘that’ happening – hence the Brussels ‘record’ is stuck: repeating the mantra of ‘There Is No Alternative’ (TINA) to more, and closer, Euro-integration. And that is precisely what the European ‘sovereigntists’ are determined to oppose, by all means possible.

Only the onset of the coming recession in Europe and the associated sovereign debt crisis may prove sufficient to shake Brussels from its smug torpor, and to focus minds on how to manage the coming crisis. As Evans-Pritchard concludes, the ECB cannot save the eurozone another time. The baton passes to the politicians – if they are able?

Welcome to the new phase of Westphalian struggle: European ‘Empire’ – to be, or not to be. Adding Context to ‘News’ about Venezuela