Home AMERICAN BRAINWASH The Case Against Voting for President

The Case Against Voting for President

August 15, 2019 7 minutes read
Please make sure these dispatches reach as many readers as possible. Share with kin, friends and workmates and ask them to do likewise. 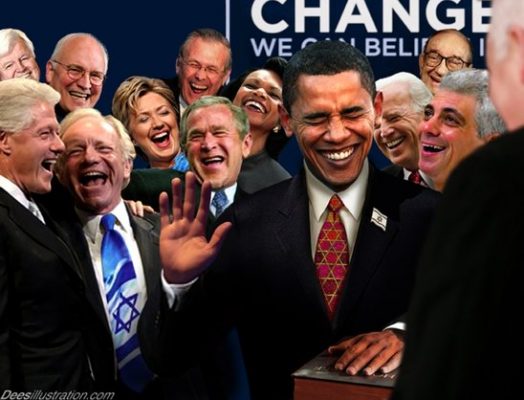 A photoshopped image imagining how the rich laugh behind our innocent backs. Obama, one of the plutocrats most effective shills, surrounded himself (as have other presidents) with Biderbergers.

[dropcap]A[/dropcap]s individuals, our choices make very little difference to the state of the world, often virtually none. Nonetheless, those same choices can have significant effects on ourselves, sometimes profoundly.

For example: One can give up driving for biking, and though this will make no difference to global pollution output, the profits of oil companies or the fossil-fuel focus of US imperialism, it could definitely improve your health, save you money and grant you great enjoyment of the outdoors. Or one can quit eating the flesh of domesticated animals, and though this will make no difference to the beef, pork or poultry industries or save even one cow, pig or chicken from the slaughterhouse, you will no longer be taking into your own body the products of such horrific suffering yourself, and that is bound to have a positive effect on you personally, if only at a subtle level of consciousness.

Or one can cast a vote for president believing it counts for something, and though the likelihood of your action making any kind of difference is vanishingly small, you will have succeeded in deluding yourself.

How so? In several ways:

As has been illustrated twice in the last two decades—in 2000 with Bush II and in 2016 with Trump—the president of the USA is not chosen by a majority of the popular vote but by the electoral college, which has merely 538 members. In 2000, the outcome came down to a 5-4 vote of the Supreme Court.

Unless you live in a “swing state,” of which there are about a dozen, there is no chance whatsoever that your vote will make a difference. In my life, I have voted in Minnesota (1988 and 2000), Nebraska (1992), Massachusetts (1996) and Oregon (2016). I lived in Oregon for the 2004, 2008 and 2012 elections but chose not to vote. In all of these cases. I was living in states that were solidly “blue” or “red” in those years and my vote made no difference whatsoever in the ultimate outcome.

(Nebraska is an oddball that assigns its electors by congressional district rather than statewide, and in 2008, Obama won an elector from the district where Omaha is located. Otherwise, the state has been reliably Republican since Nixon. In 2012, the district flipped back. There, the margin was close enough to talk about voting making a difference.)

Your vote might very well not be counted. If your state uses electronic voting machines with no paper trail, you have no way of knowing. There is ample anecdotal and circumstantial evidence that such machines have been used to flip votes and change tallies. Some believe that’s how Bush II was able to prevail in 2004, and why the contest was as close as it was in 2000.

Another way your vote might not be counted is if you use a provisional ballot. These are ballots given to people whose names don’t appear on the rolls on election day and they are kept separate from the regular ballots (if such even exist). Tens of thousands of people were given no other option in 2016, many of them in the swing states where Trump eked out his narrow electoral victory. Provisional ballots are disproportionately foisted upon people of color, who are disproportionally removed from the rolls through devious means like the Interstate Crosscheck system. (See Greg Palast’s work on this topic.) It’s entirely possible that enough provisional ballots were not counted in Detroit that Hillary lost the state on that basis alone.

All this is to say nothing of the fact that the choices given to us are themselves meaningless to begin with. No one is allowed to win the nomination of either major party unless they are a candidate who will not make a real difference if they are elected.

All this is important to me because I would love to be part of a mass collective effort to make positive change—specifically around ecological issues—but so much energy is being sucked into the quadrennial bullshit extravaganza of the presidential campaign, which started even earlier this time around.

Obama is the perfect example of this. He continued all of Bush’s wars and codified his power grabs, intensified the drone war and militarized Africa, bailed out the big banks and sold out ordinary citizens (disproportionally people of color), dramatically ratcheted up fossil fuel production and assailed the wilderness with giant “renewable” energy projects, waged a war on whistle-blowers and legalized the use of government propaganda against US citizens, and did nothing significant to address Climate Change. His eight years were an unmitigated disaster for the US and the world. The baton he passed to Trump was more dangerous than the one he inherited from Bush.

Every president since Carter has been on the same page and has pushed the same agenda of neolibealism forward. Each has been worse than the previous one, regardless of party, and without exception. The road has led in one direction and one direction only, towards the worse.

Lastly, an over-emphasis on the presidency is disempowering as hell. As an illustration of this, I recently had an exchange with someone on social media who pledged that in 2020 they will vote for whoever has a “D” after their name for president no matter what, and he gave as one of his reasons the need to protect marriage equality. I countered that the successful effort to legalize gay marriage had been a popular campaign from the get-go, not an electoral one, and that neither Obama nor Hillary supported the issue until a clear majority of voters did. In other words, the politicians did not drive that effort, the people did. I added that he was insulting these activists and their work by suggesting that we now had to rely on the president to protect what had been successfully fought for. He disagreed and our conversation ended there.

The legalization of Cannabis is another example of people power. Decades of activism at the grassroots (ha!) built a steady groundswell of support that has become a definite majority. Even with Trump in office, both houses in Republican control, and notorious Marijuana-hater Jeff Sessions as Attorney General prior to 2018, the progress made with that issue was not eroded, not even a little. These instances should serve as evidence that organizing works regardless of who is in office.

All this is important to me because I would love to be part of a mass collective effort to make positive change—specifically around ecological issues—but so much energy is being sucked into the quadrennial bullshit extravaganza of the presidential campaign, which started even earlier this time around. In the Age of Trump, it’s worse than it has ever been, and not because of who Trump is, but because the obsession with him is so shrill and pervasive (what has been called “Trump derangement syndrome”). Everything else is driven to the margins, including sense and reason. Almost no progress is being made in any arena right now and that disgusts me far more than Trump does. He is one evil person but he has far less power than all the well-intentioned people currently doing nothing except waiting to vote him out (and scream RussiaRussiaRussia! in the meantime).

So, if you are able to cast a vote for president with the full knowledge that your choice will be as momentous as pissing in the ocean, then go ahead. But if you have even the smallest inkling of a hope that your action is going to make any difference at all in the world, you’re better off abstaining. Any act of self-delusion is dangerous to oneself. Every lie told has a corrosive effect. Your perception of the world becomes contorted to fit the shape of the narrative you are desiring, and eventually you are unable to see clearly anymore. Lies and truth become indistinguishable. Given the high stakes we are facing—planetary ecocide and possible human extinction—we cannot afford any wasted moves. So don’t vote for president!

ABOUT THE AUTHOR
Kollibri terre Sonnenblume is a writer living on the West Coast of the U.S.A. More of Kollibri’s writing and photos can be found at Macska Moksha Press.