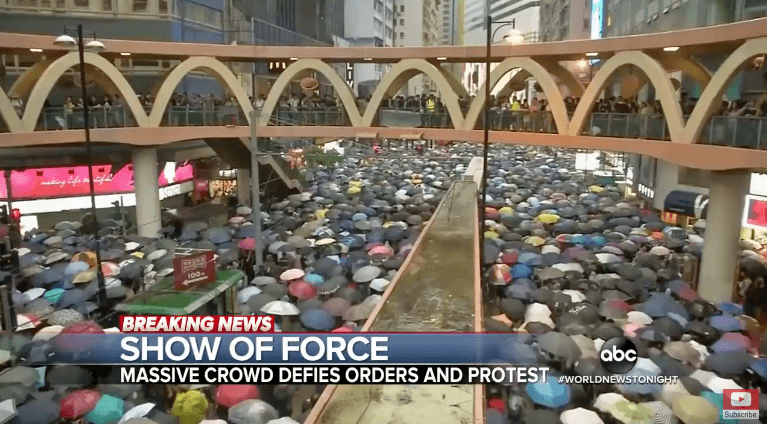 Images and context on Western media are subject to expert manipulation and should not be believed as presented.

The second stage was the creation of disinformation about China’s treatment of minority groups, especially in Tibet and west China. …

[The third stage is] the propaganda war extended to China’s economic development, its international trade, the Shanghai Cooperation Organisation, its Silk and Belt Road Initiative, its development bank, and other facilities and trade initiatives, through which China is accused of trying to control the world. …

The fourth phase is the US attempt to degrade the Chinese economy with punitive “tariffs,”

A fifth phase [is] the kidnapping and illegal detention of Meng Wanzhou, the Chief Financial Officer of China’s leading technology company Huawei,

[The sixth phase] in this hybrid warfare is the insurrection being provoked by the US, UK, Canada and the rest in Hong Kong, …
Also on August 14th, the anonymous “Moon of Alabama” blogger (a German intelligence-analyst), headlined “Violent Protests In Hong Kong Reach Their Last Stage”, and he opened:
The riots in Hong Kong are about to end.
The protests, as originally started in June, were against a law that would have allowed criminal extraditions to Taiwan, Macao and mainland China. The law was retracted and the large protests have since died down. What is left are a few thousand students who, as advertised in a New York Times op-ed, intentionally seek to provoke the police with "marginal violence":
"Such actions are a way to make noise and gain attention. And if they prompt the police to respond with unnecessary force, as happened on June 12, then the public will feel disapproval and disgust for the authorities. The protesters should thoughtfully escalate nonviolence, maybe even resort to mild force, to push the government to the edge. That was the goal of many people who surrounded and barricaded police headquarters for hours on June 21."
The protesters now use the same violent methods that were used in the Maidan protests in the Ukraine. The U.S. seems to hope that China will intervene and create a second Tianamen scene. That U.S. color revolution attempt failed but was an excellent instrument to demonize China. A repeat in Hong Kong would allow to declare a "clash of civilization" and increase 'western' hostility against China. But while China is prepared to intervene it is unlikely to do the U.S. that favor. Its government expressed its confidence that the local authorities will be able to handle the issue.
There are rumors that some Hong Kong oligarchs were originally behind the protests to prevent their extradition for shady deals they made in China. There may be some truth to that. China's president Xi Jingpin is waging a fierce campaign against corruption and Hong Kong is a target-rich environment for fighting that crime.
The former British colony is ruled by a handful of oligarchs who have monopolies in the housing, electricity, trade and transport markets: …
Then there was this from him, after the Sunday, August 18th, Hong Kong demonstration:
https://www.moonofalabama.org/2019/08/which-hong-kong-protest-size-estimate-is-right.html

Which Hong Kong Protest Size Estimate is Right?
The New York Times further promotes the protests in Hong Kong by quoting an extravagant crowd size estimate of yesterday's march.
… So what is it? 128,000 or the 13 times bigger 1.7 million? With the mood set in the first paragraphs the Times is clearly promoting the larger estimate.
But that estimate is definitely false. (As was my own early estimate of 15-20,000 based on early pictures of the event.) It is impossible that 1.7 million people took part in the gathering and march. There is no way that the 1.7 million people would physically fit in or near the protest venue.
He demonstrated there, beyond question, that the NYT’s allegation that the crowd was 1,700,000 was at least 13 times too large. 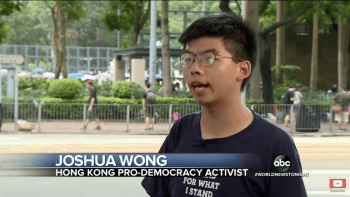 Organizers say more than a million demonstrators gathered Sunday in Hong Kong … carrying umbrellas that have come to signify resistance. …

Pouring rain in #HongKong but tens of thousands still protesting today... chanting ‘Hong Kong people, keep going’. The rally is seen as a measure of public support for the protest movement, after 11 consecutive weekends and increasingly violence. @NBCNews @NBCNightlyNews @MSNBC

5:26 AM - Sun. Aug 18, 2019 ...
"We demand that the bill be formally withdrawn now," said Alvin Yeung, a member of the region's Legislative Council and leader of the pro-democracy Civic Party. He also told All Things Considered that protesters are demanding "an independent inquiry to look into police misconduct and brutality."
"That is something so simple that any open and civil society would do," he added. "But then this government has been refusing to set up a commission to look into that. And more importantly, of course, is a democratic system.” …
https://www.npr.org/2019/08/20/752882615/twitter-and-facebook-shut-down-fake-propaganda-accounts-run-by-chinese-governmen
Twitter And Facebook Shut Down Fake Propaganda Accounts Run By Chinese Government
August 20, 20194:23 PM ET
Heard on All Things Considered
NPR's Mary Louise Kelly speaks with Adam Segal, at the Council on Foreign Relations, about Facebook and Twitter shutting down hundreds of fake accounts run by the Chinese government.
MARY LOUISE KELLY, HOST:
We have heard a lot about Russia creating fake social media accounts to influence political discourse in other countries. Now Facebook and Twitter say they have shut down hundreds of fake accounts created and run by the Chinese government. These pages are mainly spreading messages against the Hong Kong protests.
Adam Segal is the director of digital and cyberspace policy at the Council on Foreign Relations. He has studied China's use of disinformation, and he joins us now. Hi, there.
ADAM SEGAL: Thanks for having me.
KELLY: So help us understand what exactly China stands accused of doing. Give me an example of one of these fake accounts and what it's been tweeting or posting.
SEGAL: Twitter and Facebook have said that the Chinese have created fake accounts or inauthentic accounts and that they've spread disinformation about the protests in Hong Kong. Some of the accounts have compared the protesters to cockroaches or to ISIS and have suggested that they've taken money from either foreigners or what one of the accounts called bad guys.
KELLY: What is the scope of this operation, as far as we can tell? …
The basic U.S. lie is that the U.S. Government has a right to participate in affecting Hong Kong’s future. Hong Kong has been part of China ever since 214 BCE when the Qin Dynasty conquered the loca tribe, the Yue. The British Empire took it over in 1841, when the infamous British East India Company “began to grow opium in Bengal, present day Bangladesh, and smuggled it into China illegally. The influx of narcotics reversed the Chinese trade surplus, drained the economy of silver, and increased the numbers of opium addicts inside the country, outcomes that seriously worried Chinese officials,” who tried to resist the British Empire but were conquered by it so that in January 1841, the Qing dynasty’s Hong Kong official, Qishan, 'ceded Hong Kong' to Britain’s Admiral Sir Charles Elliot, who then promptly became the British King’s first Administrator of Hong Kong. Hong Kong was finally “handed back” to China on 1 July 1997, as the last of the British Empire’s colonies to be let go; and, at that time, China agreed with Britain’s ruler to treat it as being one of China’s “Special Administrative Regions”. The United States is simply grabbing for it now, but has no right there of its own, and is consequently pretending to support the rights of Hong Kong’s residents, who are actually none of America’s business, but are simply pawns in American billionaires’ “great game”, who are trying to take over the world as Britain’s aristocracy had previously tried to do. Furthermore, some indications suggest that this 'revolution' in Hong Kong might possibly be, like the U.S. regime’s operation in Iran was in 1953, a joint U.S.-UK operation or coup.
The amazing thing is that America’s leading ‘reporters’ of ‘news’ continue on with their lying, even after it has been conclusively exposed in the few honest non-mainstream news-sites online (such as here and here and here and here and here and here and here and here and here and here and here and here and here and here and here and here and here and here and here and here and here and here and here and here and here — all 25 of those are great  news-sites, reliable news-sites, news-sites that are punctilious about truth, and careful to avoid lies). (The continued existence of each one of them is jeopardized because no billionaire, or even centi-millionaire, is backing even a single one of them.) America’s leading ‘reporters’ just ignore truth (since that doesn’t pay), and they continue to pump the regime’s lies, being stenographers for its lies, trusting and never challenging such ‘authorities’ (billionaire fronts) as the Council on Foreign Relations, and the Brookings Institution, and the U.S. Government, and the New York Times, and the Washington Post, and U.S. TV and radio, etc. — all of the same fraudsters who had been pumping for the invasion of Iraq, up to and including the U.S. regime’s criminal invasion of that land in 2003. Americans haven’t learned a thing, except lies, since at least  2003. There seems to be an endless market for lies, in the U.S. And this market consists of billionaires, who fund them — not really of the audiences, who get fooled by them.
Inside Hong Kong itself, the profusion of U.S.-UK-backed lying ‘news’, along with some instances of sloppy news-reporting by pro-China media, cause many Hong Kongers to distrust all reporting, or else to trust only reporting that confirms their existing beliefs.

Macron Came To The Conclusion.