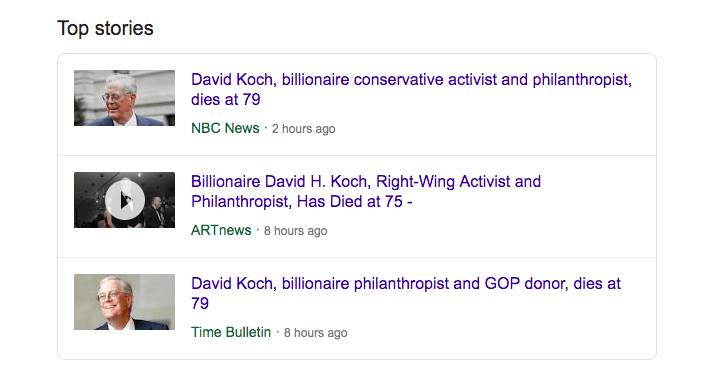 [dropcap]W[/dropcap]ell hot damn, we’ve lost a Koch brother! Do your happy dance, call out the munchkins and let your voice shake the heavens with a rousing rendition of “Ding-dong the oligarch is dead!”

David Koch, the younger of the two plutocratic faux-libertarian powerhouses who were until today collectively known as the Koch brothers, has died at 79. If you find my celebration of this distasteful, you can kindly kiss my bogan ass. Every time a toxic oligarchic death cultist dies there are always a bunch of people buzzing around social media and the blogosphere admonishing everyone to be respectful and polite because blah blah something about having a family. Such calls for civility toward our rulers are always anti-populist in nature; they stem from a fear of what would happen if the unwashed masses lost their reverence for the ruling class, and I have no respect for them. The less reverence we have for these creeps, the better.

And the narrative managers have of course been shoving us as hard as they can in the opposite direction toward reverence and adulation, with the word “philanthropist” filling out headlines for mass media outlets like Fox News, NBC and CBS. The New York Times  published a fawning hagiography with the subheader “A man-about-town philanthropist, he and his brother Charles ran a business colossus while furthering a libertarian agenda that reshaped American politics.” 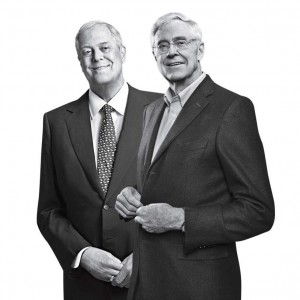 The Kochs represent capitalist royalty and their climate denialism, along with that of other members of the energy sector (such as Exxon/Mobil) has done immense damage to the biosphere.

Now, calling American Enterprise Institute council member and virulent Mitt Romney stan David Koch a “libertarian” is ridiculous; he was as much a libertarian as Hillary Clinton is a socialist. The Kochs have always paid lip service to shrinking government, but all they’ve ever pushed for with their actions is the shrinking of the aspects of government which inconvenience the oligarchs: taxes and regulations. They’ve left the mechanisms of bloodthirsty imperialism, Orwellian surveillance and oppressive neoliberalism almost entirely unchallenged; they’re neoliberal centrists wrapped in a fake libertarian bow. But far more offensive to common sense and human dignity is labeling him a “philanthropist”.

If I could strike one word from the English language, “philanthropist” would be it. That word’s sole meaning these days is a label that gets attached to parasitic plutocrats who donate a very small percentage of their wealth to tax-exempt charities so that people won’t notice they’re living in a plutocracy and roll out the guillotines.

Any adept socializer knows that it doesn’t take much to get on someone’s good side; a little well-placed flattery at a party one night and you’ve earned a defender and supporter for life. In the same way, a casual look through campaign donations from the plutocratic class on Open Secrets will show you that it doesn’t take much to get a politician on the side of your interests; a few thousands dollars here, a few thousand there, and you’ve bought yourself a congressman. People respond to positive reinforcement, and it takes very little to elicit this response. Plutocratic charity donations follow the same principle; a billionaire who sprinkles a tiny percentage of his income around a few of his favorite causes will earn the title of “philanthropist” for life.

And when I say tiny, I mean tiny. Study after study has found that the wealthy give less to charity than those who make orders of magnitude less money than they do, which should surprise no one since study after study has also found that wealth kills empathyand makes people more sociopathic. Yet you’ll never see any member of the middle or lower class eulogized as a philanthropist, even if they give a much larger percentage of their income to charity than David Koch did.

Even when they do give money to charity, the wealthy need to have those donations solicited in the most egoically appealing way possible before they’ll deign to consider them. In an interview with Creative Mornings, author Anand Giridharadas described what he learned from disgraced philanthropy fundraiser Emmett Carson about how much bowing and scraping and conceptual re-framing that people have to do in order to convince a billionaire to part with a few coins:

“[Carson] said ‘Look, I worked in social justice my whole life, I used that term my whole career.’ Then he gets this job in silicon valley. He becomes Mark Zuckerberg’s adviser, and others in that world. And he said to me ‘It was made very clear to me very quickly [that] you don’t say this word ‘social justice’ around here.’ And I said ‘Why?’ and he said ‘Well, I think [for] people out here it sounds to them like you’re taking from them.’ You know, which… is actually correct!

“And what I learned from Emmett was something very important which is rich and powerful people in our time really do want to help but they have certain requirements for how they want to feel in their helping. They want to feel consulted, which they feel when they do things philanthropically and they don’t feel when government just takes their money and makes a collective decision about what to do. So, they like charter schools, they don’t like equally and adequately funded public schools. They like to feel useful and not blamed. Right? So they don’t like the Bernie Sanders kind of rhetoric around how Facebook’s a monopoly or around Amazon’s doing like… they don’t like that, doesn’t make them feel good. But they’re willing to help if you say ‘Wow, I mean, you built Facebook, that’s so amazing that you created a way for people to waste all this time, and maybe, maybe given that expertise you can help the kids in Newark have a better education?’ They love that. They love that feeling of like, ‘You’re useful. You’re not the problem.’

“There is a clear understanding that.. a little bit of giving may just be as a smokescreen for a kind of pillaging of the economy,” Giridharadas said elsewhere in the interview, describing the cynical use of charity by Goldman Sachs. There are some great articles by dissident media publications out today about the kind of pillaging David Koch was involved in, including this one by Jacobin titled “For Humanity, David Koch Died Decades Too Late”, and this one by Rolling Stone titled “David Koch Built a Toxic Empire — with Human Consequences”.

We’ve seen the way the “philanthropist” title is abused highlighted elsewhere in recent days with the attention swirling around the strange case of Jeffrey Epstein. In an excellent new interview with Consortium News, journalist Whitney Webb explains the ways the Epstein case ties into all the most fundamental pillars which uphold existing power structures today, including plutocracy, intelligence agencies, organized crime and pedophilia rings. Webb mentions in the interview that when Bill Clinton was first asked about his relationship with Epstein he responded by babbling about philanthropy.

“Jeffrey is both a highly successful financier and a committed philanthropist with a keen sense of global markets and an in-depth knowledge of twenty-first-century science,” Clinton told New York Magazine in 2002. His sentiments are echoed in contemporary establishment narrative management publications, like this adoring 2003 puff piece by The Harvard Crimson which sees Epstein labeled “one of the most pleasant philanthropists” after a donation to Harvard University.

Ultimately “philanthropy” is just yet another narrative control device used by and for the powerful to maintain the status quo upon which oligarchs like David Koch built their empires. If he were Russian he would not be eulogized today by the western mass media as a “philanthropist”, he would be called exactly what he is: an oligarch. An oligarch who has helped create the climate denialism in America which now sees climate contrarians receiving 49 percent more mass media coverage than climate scientists, one who backed Iraq-raping think tanks, one who helped kill unions and guzzled corporate welfare while pretending to oppose it.

Remember him as such. It’s the most charitable and philanthropic thing you can do today.