September 1, 2019 2 minutes read
Please make sure these dispatches reach as many readers as possible. Share with kin, friends and workmates and ask them to do likewise.

[dropcap]S[/dropcap]o much of what passes for America’s Kulturkampf (culture struggle) consists of phony, made up, manufactured issues.  Consider the following sign, sent to me by a friend as he toured the wilds of Pennsylvania: 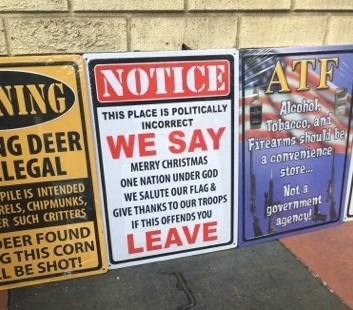 It is supposedly “politically incorrect” to say Merry Christmas, to state the Pledge of Allegiance (“one nation under God”), to salute the flag, and to thank the troops.  Those who do all these things apparently take pride in their alleged outspokenness and their love of all things American.

Forgive me for stating the obvious, but it’s never been politically incorrect to say Merry Christmas.  Virtually all Americans say they believe in God or some higher power.  Nearly all Americans respect the flag (even those who kneel in protest, I’d argue), and America’s respect for the military has never been higher.

But this sign with its false narrative encapsulates much of the Republican/Trumpian message: We’re the real Americans.  And anyone who says “Happy Holidays” or who suggests separation of church and state or who sees protest as legitimate free speech is obviously un-American and should leave the country.

I just wonder at all those Americans who buy signs like this, thinking that by doing so they’re showcasing their bravery at being non-PC and their pride in being so “American.”

One thing is certain: this manufactured culture war is a great way to distract and divide the commoners as the rich and powerful continue their looting of America.

William J. Astore, a retired lieutenant colonel with the U.S. Air Force, is a TomDispatch regular. He has taught at the Air Force Academy and the Naval Postgraduate School, and now teaches history at the Pennsylvania College of Technology.