“I won’t eat animals,” little girl tells her mother. Zada’s mind is made up.

[dropcap]L[/dropcap]ittle Zada below does not know it, but she is already immersed in one of the most monumental and maligned struggles in the history of this planet. 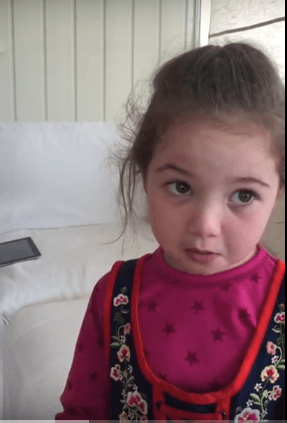 Her moving words, however, show us that even a toddler can have instinctive empathy for the pain of other beings. It is testimony to the fact that our insensitivity to massive animal suffering is a cultural acquisition, implanted in most of us at birth, as the "way things are."  But traditions, as we have seen at least in the last two centuries, have a lot of very dark corners and things to answer for. The fact that a custom (or ideology) is embraced by umpteen millions doesn't make it right. In our own home turf, the history of suffering in our own species, for millennia slavery was regarded as "natural" and many even thought it harmless and imperative to "civilisation". In part because of such attitudes, traditions are often enormously hard to break or eliminate. Pious southern ministers and other opinion leaders in the US Confederacy rarely if ever rose to denounce slavery. And we all know that it took a veritable bloodbath—the death of more than 620,000 soldiers— to break the "peculiar institution" in the American South, and even with the South defeated, African Americans did not exactly gain equal rights or actual freedom at the moment of their much awaited formal emancipation. A very long and painful and ugly slog lay ahead, one with many heroes and martyrs, and it's obvious that more than 150 years after the war between the states ended, much of African America is still partially in chains.

Reem Makhoul
First published on Sep 1, 2016
Realising, to her horror, that meat is made from animals, five-year-old Zada tells her mother she's a vegetarian. And her mind is made up.

Bad traditions and customs die hard
The American experience with slavery is a harsh reminder that no matter how awful a custom may be, whether political, religious or economic (always a reflection of the political and vice versa), or one whose origins are lost in the mist of history, it takes a great deal of effort and pain to eliminate it. Humans are animals of habit. And often the problem is deeply embedded in the culture because a strong or dominant segment benefits directly from it. The history of humanity's evolution and pursuit of freedom from various forms of oppression—slavery, feudalism, capitalism, sexism, racism, male chauvinism, etc.—shows that victories, such as they are, are hard, and that even when an evil has been largely unmasked and uprooted, many remnants stay behind, sometimes adopting new forms and still making life miserable for countless victims.

Human slavery is one of the oldest and most persistent and diverse evils in history, and it's clear the American south had plenty of breathtakingly ugly and brutal models to draw upon. In this context, the Spartans stand out for their studied cruelty toward their slaves (the Helots), whom they employed, as all "master races" do, to do all sorts of grueling and dangerous work in their society, from growing food, to taking care of construction jobs, and even serving as human shields to Spartan warriors in various battles. Owing to their own numerical inferiority— there were about 7 helots to one Spartan— Spartans were always preoccupied with the fear of a helot revolt. The ephors (Spartan magistrates) each year on entering office declared war on the helots so that they might be murdered at any time without violating religious scruples. During these massacres, which for younger Spartans became a coming of age ritual, they concentrated on murdering the youngest and strongest among the captive population.

There are different accounts of how this horrid relationship ended. Some chroniclers claim that after a particularly ferocious revolt which took the Spartans more than a decade to put down, the Spartans—standing on a very tenuous victory—agreed to a truce—and freedom for the helots, provided the latter accepted banishment to Sicily. Another version, advanced by revisionist historians, notes that after several intermittent revolts starting c. 660 BC, and after two or three attempts over 300 years, the helots finally succeeded in defeating and disbanding the Spartans, thereby wiping out Sparta from the map as a feared Peloponnesian power. This is supposed to have happened c. 464 BC.  Whichever version we choose, it's irrefutable that the slave revolts weakened Sparta considerably and made it vulnerable to conquest by rival powers among Greece's city states. Sparta's defeat by Thebes in the Battle of Leuctra in 371 BC ended Sparta's prominent role in Greece.

The struggle for any form of liberation usually raises moral consciousness. Every great social revolution seeking to expand the rights of the oppressed has had an inherently superior moral component fueling much of the struggle. There have been no exceptions to this rule. Thus the fight to overcome ancient slavery, feudalism, serfdom, capitalism, colonialism (a form of racism in action), male domination, malignant imperialism, and these days even speciesism—the subjection of all living nature to the cruel whims of humans—all have been and are animated by successively broader and deeper ambits of moral lucidity. Assuming we manage to overcome the fascio-capitalist monster and its cancerous imperialism, along with its plethora of social vices and still very much alive different strains of human oppression, all in time to turn things around to spare the world an ecological implosion or a nuclear catastrophe, the struggle against speciesism may be the last of the great battles in the moral history of our species. —PG

Antifa: A Look at the Antifascist Movement Confronting White Supremacists in the Streets

The National Anti-Roadkill Project is Gearing-up to Implement...

Torched Puppy Deserves Law in His...