Taiwan Comes to the Forefront in the US-Chinese Military Standoff

September 5, 2019
Please make sure these dispatches reach as many readers as possible. Share with kin, friends and workmates and ask them to do likewise. 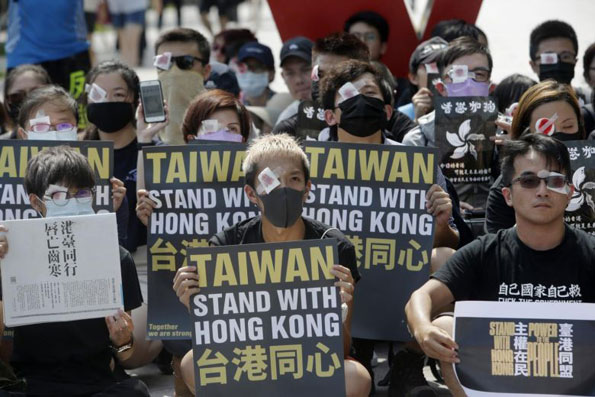 The New Eastern Outlook has repeatedly noted the sharp increase in the role of Taiwan in the complex relations between the two leading world superpowers. Against the backdrop of a continuous deterioration in these relations, Washington’s desire to restore the format of its pre-1979 ties with Taipei is becoming increasingly clear.

The conceptual basis for the US policy on Taiwan, which began with the formation of the PRC in 1949, was made up of the words of General D. MacArthur who led the U.S. troops in South Korea and said in 1951 that “the loss of Taiwan will push our borders back to California.”  The exceptional role of Taiwan in the military confrontation with China had to be sacrificed (partly, let us emphasize) in 1979, when the confrontation with the Soviet Union was aggravated and there was an urgent need to establish comprehensive relations with Beijing. After the breakup of diplomatic relations with Taipei carried out at the time, the functions of maintaining various kinds of contacts with it were in the hands of lobbyist organizations.Among them, there was the US-Taiwan Business Council (USTBC). Established in 1976, USTBC refers to itself as a non-profit organization dedicated to the development of trade and business relations between the United States and Taiwan. From 1981 to 1989, in the absence of formal diplomatic relations, the Council was actively engaged in the development of various US-Taiwanese relations.In particular, defense and security issues have been discussed at the US-Taiwanese Defense Industry Cooperation Conference, which USTBC has held annually since 2002. It is there that the experts discuss and prepare drafts of (now official) US decisions to help strengthen Taiwan’s defense capabilities.It should be noted that Taiwan also has its own opportunities in this regard. However, Taiwan’s defense policy and development of military capability deserve separate consideration. Here we should only note a sharp increase (by more than 8%) in military expenditures in the 2020 draft budget, which was announced in August this year. Such an upsurge has not been observed in the military expenditures of Taiwan since 2008.

The statements made by Washington on two deals on the sales of American weapons to Taiwan for a total amount of more than $10 billion coincided with the publication of its own plans in the defense area. Of that amount, Taipei will pay $8 billion for the delivery of 66 cutting-edge F-16 fighters (Block 70).Before the author comments on this event, which is extremely important for the situation both in the US-Taiwan-China triangle and in the region as a whole, let us give the floor to the President of the USTBC R. Hammond-Chambers: “Since 2001, this is the most important act of selling American arms to Taiwan.” Listing in this connection various aspects of the sharp increase in the combat readiness of the Taiwanese armed forces, he particularly emphasized the role of the purchase of the latest F-16 modification “as a bridge” to the purchase of 5th generation F-35 fighter planes.

For our part, let us single out several details. First, the unprecedented scale of US arms deliveries to the island with a population of 24 million. Let us emphasize that these are deals, not mere intentions (e.g. regarding Saudi Arabia). Secondly, the moment of their conclusion, as Taipei had first addressed Washington in 2006 with a request to sell the F-16. The third point will complement the words of the USTBC President concerning the main component of both transactions, that is, the aforementioned fighters.

First of all, the F-16 program, launched in the late 1960s – early 1970s by the American defense company Lockheed, is one of the most successful in the post-war aircraft industry. Originally developed mainly for land strike, the plane demonstrated 30 years ago (during the Israeli Air Force’s Operation to destroy the Iraqi nuclear reactor Osirak) its efficiency in overcoming the complex air defense system and delivering a preemptive strike against important, well-protected targets.

Taking into account the fact that the combat efficiency of the modern weapon systems is mainly determined by their diverse equipment of electronic and IT-systems, the F-16 Block 70 (which Taiwan will get) and the F-16 of forty years ago are only similar in their appearance.

That is, the very fact and scope of the recent transactions on the sale of US arms to Taiwan, their nomenclature and the moment chosen for official statements on this topic indicate that the relationship between the two leading world superpowers are indeed in the midst of extremely serious trials.

In the context of this article, it seems quite appropriate to also touch upon the prospect of possible deployment of the land version of the Tomahawk medium-range cruise (subsonic) missile in Taiwan. The US domestic tests of this version of Tomahawk, which caused a wide media resonance, were conducted almost immediately after the termination (on August 2 this year) of the Treaty prohibiting the possession of such weapons (IRNFT).

It is necessary to remind the reader about the author’s position on a number of important issues that accompany the (already de facto) termination of the Intermediate-Range Nuclear Forces Treaty. Firstly, the Treaty was doomed due to the dramatic changes that have taken place on the table of the Great World Game over the 35 years following its signing.

Secondly, there are no military and strategic motives for developing a land version of Tomahawk. The (many) thousands of these missiles, which he US has already, deployed on the seas (Arleigh Burke destroyers), underwater (submarines) and in the air (strategic bombers) quite successfully solve the problem of overcoming any conceivable air defense system and the notorious flight time issue. Even without the use of other means of attack that are also available in excess.

The obvious advantage of the off-land strategy adopted several decades ago in both offensive and defensive (e.g., missile defense) weapon systems is that their mobility is dramatically increasing. That is, the necessary number of launchers can be quickly concentrated in a “menacing area” without asking permission from other countries’ governments.

And suddenly there is the prospect of the very same Tomahawks land use. Its “rational” explanation is seen primarily in the phenomenon of the US military and industrial complex, whose activities are not always linked to the real problems of the country. Which is what D. Eisenhower, a top-class military professional, mentioned 60 years ago.

It is also important to note such a possible motive as the concentration of the “electoral core” of the current US President in the industrial sphere of the US economy.

Where to deploy land Tomahawks, is to be decided by the officials of the US Department of State and the Department of Defense. At first glance, the most likely foreign partners are the élite of the East European limitrophe states ready to sell their territories (together with the population) to a more favorable owner for a penny.

But the latter is unlikely to need their services, because its key foreign policy problem is now located on the opposite side of the globe. The US will have to seek potential land Tomahawk deployment partners in the space surrounding the main geopolitical opponent, i.e. China.

The consent of the governments of the PRC’s neighboring nations will be required even if the land Tomahawks are deployed on mobile platforms that can be moved quickly by military transport aircraft. And the author highly doubts that even the official US allies such as Japan and South Korea, who, despite their mutual hostility, are quite successful in developing their relations with Beijing on a separate basis, will give such consent. Neither will Washington get it from Vietnam, nor from the other 9 ASEAN member countries, Nepal and Mongolia.

So far, there is no prospect that relations between the two Asian giants (India and China) will face such serious problems that Delhi will take a step (with most serious consequences) to allow Washington deploying land Tomahawks in its territory.

As for Taiwan, located only two hundred kilometers off the Chinese coast, it may turn out to be the main and most promising place of the (hypothetical, let us once again emphasize) Pentagon’s plans to deploy the land Tomahawks.

Especially since the recent arms deals between Washington and Taipei demonstrate the willingness of the parties to continue strengthening the military component in the de facto ongoing process of restoring the format of the pre-1979 US-Taiwanese relations.

ABOUT THE AUTHOR
Vladimir Terekhov, expert on the issues of the Asia-Pacific region, exclusively for the online magazine “New Eastern Outlook”.