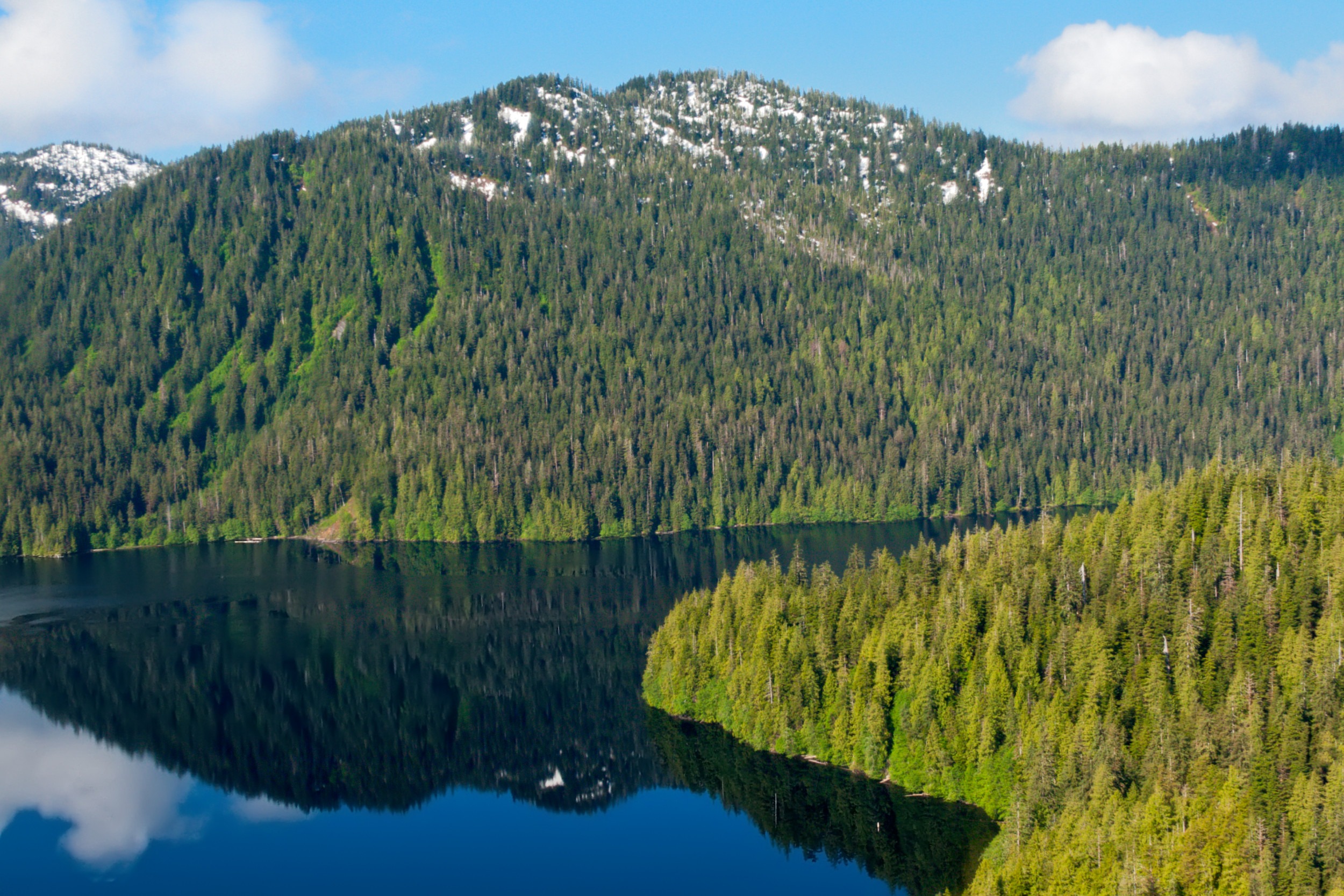 The Tongass forest to become yet another victim to the global disease. Capitalism is the cancer; Trump merely its most virulent vector.

One wonders if Trump and his administration are aware of what is happening in the world or if they care the Earth is under deadly stress by no less an enemy than humans.

Are they so certain their crackpot theories are valid, that global warming is a hoax, that it’s fine to keep cutting down forests, that burning the Amazon is good for ranchers, that pollution is good for business, that poisoning children by neurotoxins in their food is an unavoidable part of food production?

Or am I wasting my time even raising these questions?

Trump probably believes with most economists that you make money by breaking eggs: cutting down trees, producing food by poisoning the land and the food people eat, constructing golf courses and skyscrapers, gambling in the stock market, outsourcing most industries, digging for gold, silver, and petroleum and lavishing the Pentagon’s war machine.

This is probably true. Economists and executives of the country’s largest companies consider pollution an externality of no consequence. They have been opposing environmental regulations for decades. Trump is doing their bidding.

So, why should we be upset by the latest proposal of Trump to log the Tongass National Forest?

CivilizationSocieties join civilization under the rule of law and the virtues of justice, keeping religion out of politics, guaranteeing the freedom of thought, the employment of science for the discovery of truth, and protecting human and environmental health. In other words, you no longer live alone out in the woods, shooting everything that moves for a meal. Even MacDonald’s happy meals shouldn’t take away the rights of wild animals to also have an opportunity for a meal.

Under these virtuous political and ecological conditions, not many countries qualify to talk, much less to brag, about civilization.

It’s not merely Jair Bolsonaro who is burning the Amazon for more beef exports. American and European and African and Asian politicians and businessmen are burning and excavating their countries for money and power. Or, if that is not possible, they fund others in other countries to convert the natural world into cash.

Few if any world politicians and businessmen take climate change seriously and abandon fossil fuels or protect the natural world as if their lives depended on it.

The malaise is global. The twentieth century removed most of the rural people from villages to urban slums. The twenty-first century added technical prowess and confiscated peasant land to industrialized agriculture. Technologies boosted the processing and sale of food. Automation is engulfing industrial production. Computers abolish time in communications.

This high tech illusion does little to ameliorate world hunger and poverty or pollution. Rather, it is warning the urban majorities to  keep serving their masters.

Those masters are the president and his assistants, agribusiness CEOs, other corporate executives, bankers, TV and media owners, state governors, Congressional politicians and the military.

Trump is the top boss. His policies against the natural world and the health of Americans are probably incomprehensible to him. He understands, however, his rollbacks of environmental laws please his election funders and the corporate elite.

You notice that when he signs his executive orders. He turns the signed text of the order to TV as if the text was celebrating a victory over an enemy. I wonder if he even reads the text. He is simply doing the work of corporate America.

The Trump administration ordered the Forest Service to approve this process of destruction. In March 16, 2019, the Forest Service designed a 15-year logging project in the Prince of Wales Island that included the opening of 164 miles of new roads in 67 square miles of land and the clearcutting of up to 23,000 acres of old-growth trees – trees several centuries old.

Environmental organizations like Earthjustice, Sierra Club, Alaska Wilderness League, Southeast Alaska Conservation Council, Alaska Rainforest Defenders, National Audubon Society, Natural Defense Council, Defenders of Wildlife, and the Center for Biological Diversity sued the Forest Service and the US Department of Agriculture for violating the National Environmental Policy Act and other environmental laws. They pointed out that such massive timber sale from the projected clearcutting of old growth trees was “wasteful, destructive, and a giveaway” to a timber industry contributing less than 1 percent to the economy of Alaska.

In addition, clearcutting 23,000 acres of ancient trees would harm the Alexander Archipelago wolf, flying squirrels, and birds like Goshawk.

Why this violent attack on a forest these environmental organizations call the crown jewel of America? The Alaskan politicians, like Bolsonaro of Brazil, have a distorted and selfish vision: satisfy the landowners in Brazil and the timber barons in Alaska.

Do these politicians, including Trump, ever think about the real bad effects, ecological and social, of their actions? They must have heard of the inferno in the Brazilian Amazon and its potentially horrific consequences on the planet. They cannot really assume or believe that adding quite a bit more carbon to the atmosphere from logging Tongass would be a good thing for America or the world? Or could they?

The only reasonable explanation of the murky world of Trump and the Republican politicians (of Alaska and the rest of the country)  is that they reject science.

Certainly, the Evangelicals do. These Christian Republicans support Trump. They make no secret they expect Jesus to rise up, thus signaling the end of life on Earth. This delusion gets scary as high officials of the Trump administration are its fervent believers.

Without understanding science or willfully ignoring it, Trump and his supporters feel free pretending they are still living in the gilded age of the nineteenth century – with slaves and plantations. That means they convince themselves to go on earning a living or make it possible for others — as their ancestors did with logging, gold digging, and petroleum and coal exploration and use.

Of course, no matter how often they say climate change is a hoax, they cannot escape its violent storms, higher temperature, and local and global crises attributed to anthropogenic policies and economics associated with business decisions like the burning of forests.

Republicans may even understand the consequences of logging the country’s largest Tongass National Forest. Opening roads in the Tongass wilderness would be unleashing destruction. It would be no better than the roads Brazil constructed decades ago in the Brazilian Amazon. Countless people and companies will pour into the Tongass forest. The result will be devastation on a grand Amazon scale. Trees and wild animals, medicinal plants, and insects will be annihilated. Salmon and ecological tourism will be gone.

If this is the vision of Trump and the Republicans, and it is, we are all victims of ignorance labeled economics and capitalism. These ways of thinking and running America and the world all but ignore environmental health, as if human health can exist in the absence of environmental health.

For example, as early as the early 1970s, the US Environmental Protection Agency had evidence Iowa farmers and those non-farmers that lived close to farmers were dying from cancer at twice the rate urban people died from cancer. The reason for such high rates of cancer death were the excessive amounts of a large variety of neurotoxic and carcinogenic pesticides Iowa farmers routinely sprayed on their crops.

In other worlds, Iowa farmers were paying the ultimate price of polluting and poisoning the natural world. A sick natural world has been causing a sick human world.

The sooner we realize this fact, that we are the natural world, the better chances we have to throw out of office Trump and his Republican followers.

Tongass, the Amazon rain forest, and other forests all over the world, teach a few straightforward truths: they are the living part of the natural world that regulates climate. Rain, oxygen, carbon dioxide, wood, wildlife, medicinal plants and valuable insects are all locked together in those trees.

Disturb those trees and ecosystems of the Amazon and Tongass at your peril.

This post is part of a series on humans’ destruction of the natural world.

About the Author
Evaggelos Vallianatos worked at the US Environmental Protection Agency for 25 years. He is the author of 6 books, including “Poison Spring,” with Mckay Jenkings.

Taiwan Comes to the Forefront in the US-Chinese Military Standoff