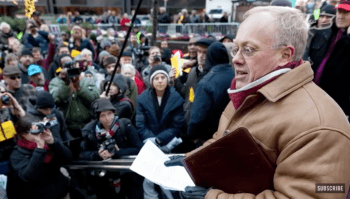 This is a rather extraordinary interview for a variety of reasons. For one, Hedges is given space to say what he likes about the topics he is most interested in, chiefly the implosion and extreme toxicity of late-stage capitalism. Apparently, VICE News, which since this interview has become an almost complete propaganda tool for the Deep State, one designed to lure younger viewers wary of the mainstream engines of disinformation (CBS, CNN, NYTimes, Fox, etc.), felt they could not totally control Hedges, and they were right.

Bestselling author and Pulitzer Prize winner Chris Hedges sits down with Ben Makuch at the Toronto VICE office to discuss what it takes to be a rebel in modern times. Hedges discusses his new book Wages of Rebellion, an investigation of the social and psychological factors that cause revolution, rebellion and resistance. From Wall Street corruption to why the elites in corporate media have eviscerated traditional investigative journalism, Hedges tries to make sense of the world we live in.

The growing threat of Christofascism in the US

For the first time in modern history, a fringe wing of Christian extremists have obtained the highest seats of power in the US government—from Mike Pence to Betsy DeVos. This new development is coupled with the emergence of the Alt Right, the Trump movement, and the rise of fascist movements abroad. Renowned journalist and author Chris Hedges has embedded himself in what he calls “Christianized Fascism” and warns that this is the biggest danger we face under Trump. https://videosenglish.telesurtv.net/v...

Two Opposite Ways of Interpreting Wars and International Relations