Home US GOVERNMENT CRIMES James Mattis, the General Who Couldn’t

James Mattis, the General Who Couldn’t 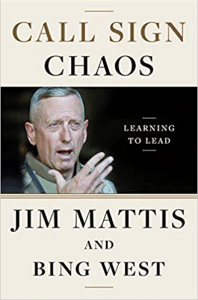 James Mattis is making the talk show rounds, promoting his new book, "Call Sign Chaos."  Interestingly, while openly critical of President George W. Bush for being unprepared for the Iraq War, and President Barack Obama for lacking a strategy and being too soft toward enemies like Iran, Mattis is remarkably circumspect about his service as Secretary of Defense under President Donald Trump.  Perhaps Trump's non-disclosure agreements really do pack a punch?

I've written about Mattis before.  Trump may have picked him in part because he looks a little like George S. Patton of World War II fame.  While serving under Trump, Mattis was deferential but not as big of an ass-kisser as most of Trump's subordinates.  Mattis was a disappointment nonetheless, bought off by all the money Trump and the Republicans (and Democrats as well) shoveled to the Pentagon.

Mattis, among several generals Trump called "his" own, did nothing to end America's disastrous overseas wars and the profligate spending on them.  He also did nothing to curb the U.S. military's desire to spend $1.7 trillion on genocidal nuclear weapons.  He had no vision for a U.S. military that would be less imperial, less wasteful, and, in two words, less stupid.

Mattis was more interested in better relations with allies than was Trump, especially NATO, but that was about the only notable difference.  That and the fact that Mattis seemed even more dedicated to using the U.S. military in debacles like Afghanistan and Syria, whereas Trump, displaying his usual fickleness and ignorance, waxed between total destruction and total withdrawal.

Strategic chaos has been the result of Mattis's service under Trump, so the book's title is unintentionally accurate.  If only retired generals would do what they used to do way back when, such as fishing and golfing, enjoying a sinecure or two but otherwise doing no harm.  But, sadly, that's no longer the American way.  Too many generals, retired or otherwise, are spoiling the Democracy, and Mattis is one of them.

Among noteworthy American generals who could, men like Patton and Ike and Grant and Sherman, Mattis is yet another pretender like David Petraeus, a man who couldn't.  He couldn't win a major, enduring, victory, and he didn't define a new course forward that would truly safeguard America's national security.  Call sign chaos, indeed.

About the author(s)
William J. Astore, a retired lieutenant colonel (USAF), has taught at the Air Force Academy and the Naval Postgraduate School. He currently teaches at the Pennsylvania College of Technology. He is regular contributor to TomDispatch and also the author of Hindenburg: Icon of German Militarism (Potomac, 2005).

‘The New Normal’: Trump’s ‘China Bind’ Can Be Iran’s Opportunity

Universal Basic Income is a neoliberal plot to make you poorer

The Shallow Deep-State Goes Deeper as It Moves Toward Martial...

Caleb Maupin on the Biden team’s links to Silicon Valley...