September 12, 2019
Please make sure these dispatches reach as many readers as possible. Share with kin, friends and workmates and ask them to do likewise.
This essay is part of our special series on disgusting imperialists 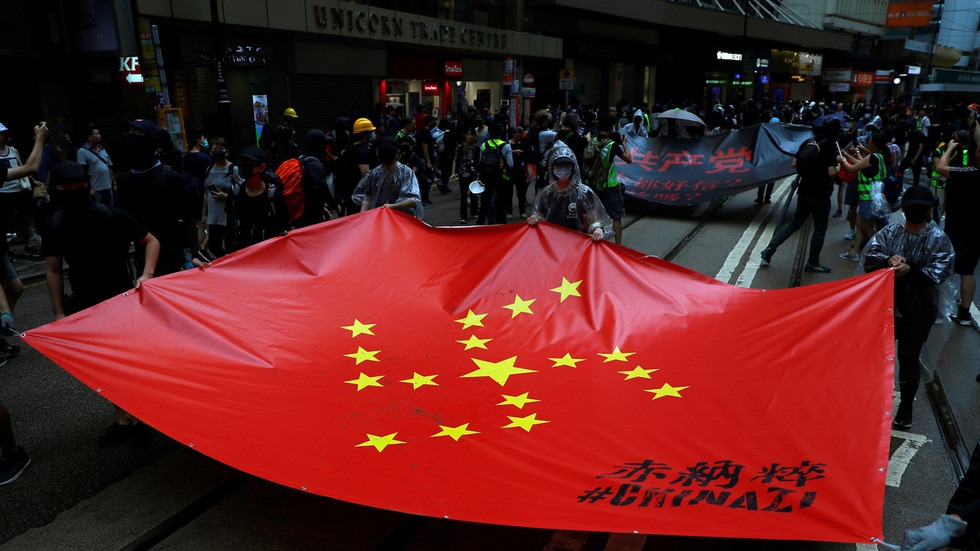 A version of the ‘Chinazi’ flag © Reuters / Kai Pfaffenbach

A planned Washington DC protest in support of Hong Kong activists and promoting the ‘Chinazi’ flag is being sponsored by at least six organizations backed by the notoriously shady, US-funded National Endowment for Democracy (NED).

Posters for the event circulated online contain an image of the so-called ‘Chinazi’ flag – an altered version of the Chinese national flag with the yellow stars arranged to form a swastika and with a hammer and sickle placed in the center.

Protesters plan to form a human chain encircling the Chinese Embassy in Washington to protest the “Chinazi regime” and call for an independent Hong Kong. The #Chinazi hashtag has also become popular with activists on Twitter.

The list of event sponsors proves that the anti-China movement in Hong Kong is backed not only by American politicians, but also by American money – through US government-funded groups.

A DC-based organization called Citizen Power Initiatives For China, which describes itself as a “grassroots movement” dedicated to promoting democracy in China through “non-violent struggle” and “overseas assistance” to “influence” Beijing’s policies, appears to be the chief event organizer.

Information on the group’s funding is not easily found on its website, but a search of the NED database shows it received $206,500 from the US-funded organization between 2015 and 2016.

The NED, founded in 1983, claims to promote democracy abroad by offering government grants to civil society groups around the world. In reality, it has been used mainly as a soft-power vehicle to advance the US foreign policy and military agenda through sowing chaos in countries targeted for ‘regime change.’

The NED is “explicitly dedicated to meddling in other countries’ affairs, interfering in elections, toppling democratically elected leaders, and spreading public relations campaigns to sow chaos against countries that resist Washington’s agenda,” award-winning journalist Max Blumenthal told RT last year. Indeed, even one of the NED’s former presidents, Carl Gershman, has admitted it was created in order to continue the work of the CIA without the stigma of being attached to the spy agency.

Other sponsors of the event are also US-based, including Dialogue China (Maryland), The China Organ Harvest Research Center (New York) and The East Turkestan National Awakening Movement (Washington DC) – but information on their funding is not clear.

Also on rt.com ‘Force is one of our methods’: Hong Kong protesters don’t hide vandalism & violence in new VIDEO

While Initiatives For China claims to support “non-violent struggle,” protests raging in recent weeks in Hong Kong have turned increasingly violent. Video footage has documented activists wielding bats and metal rods, attacking public property and throwing bricks and Molotov cocktails at police. “Using force is one of our methods to protect ourselves and to protest,” one masked protester told Ruptly video agency.

The NED’s focus on Hong Kong fits with the typical US approach to anti-government protest activity abroad. A government memo, leaked in 2017, confirmed that it is US policy to “emphasize” pro-democracy movements in adversary nations, while playing them down or ignoring them in friendly nations – Beijing has accused the US of orchestrating the movement and analysts have argued that encouraging unrest in Hong Kong is seen to be beneficial for Washington as US President Donald Trump wages a trade and tech war with China.

Indeed, protesters have been seen waving US flags and key figureheads of the movement visited Washington to meet with high-ranking officials, including Secretary of State Mike Pompeo, at the height of the chaos.

The links between US officials, anti-China activists and shady US government-funded organizations is reminiscent of countless US regime-change or ‘color revolution’ efforts seen around the world, from Ukraine to Syria, Libya and Venezuela.

Now, more evidence is stacking up to prove that the US is playing an active role in fueling turmoil in Hong Kong.

CHINAZI in Hanoi, 19 August 2012
The long arm of American imperialist propaganda and agitprop reaches far…even to the heart of a former victim nation.

Simple coincidence? Hmm, we don’t think so…
A policeman blocks photographers from taking pictures during an anti-China protest in front of the Opera House in Hanoi, 19 August 2012. Photo: Reuters/Nguyen Lan Thang 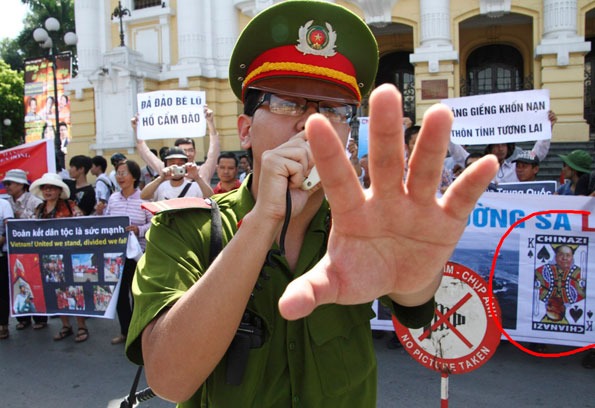 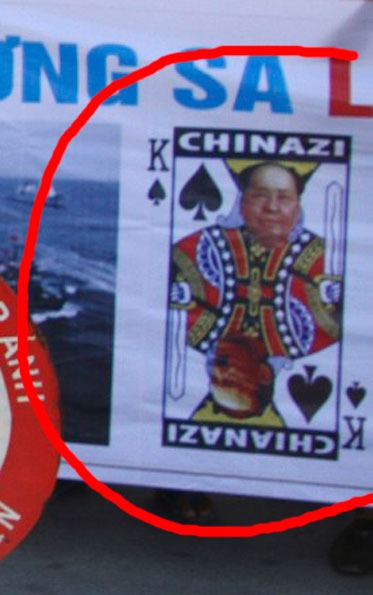 Neoliberalism Has Met Its Match in China