The US government is spending millions to sabotage Cuban medical cooperation with the rest of the world, denying hundreds of millions people in the Third World access to health services. 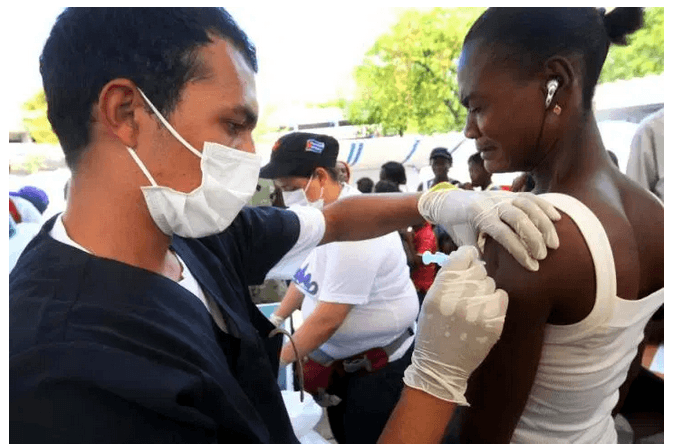 At Delmas 33, a camp for displaced Haitians in Port-au-Prince, a woman grimaces as a Cuban doctor administers a vaccination provided by the World Health Organization (WHO). UN Photo/Sophia Paris.

The United States Agency for International Development (USAID) is now offering grants of up to three million dollars for organizations to «investigate, collect, and analyze information related to human rights violations – including forced labor – of Cuban medical personnel exported overseas.”

That a new propaganda barrage was on its way, was already clear when John Bolton, U.S. National Security Advisor, declared in New York Times on April 17, 2019 that “Thousands of Cuban doctors in Venezuela are being used as pawns by Maduro and his Cuban sponsors to support his brutal and oppressive reign.»

The purge that USAID intends to unleash against Cuban medical missions abroad follows the route outlined by the US Department of State on June 20, when it added Cuba to its list of blacklisted countries that allow human trafficking. The list has a conspicuous overlap with states the US defines as adversaries (Russia, China, etc), plus some puppet Gulf Arab monarchies.

But as the Cuban writer Raúl Capote succinctly notes: And on what list should we then place a country that persecutes another for saving lives?

In total, over the past 56 years, Cuba has provided medical services in 164 countries, with 400,000 health professionals sent out and more than 1.85 billion people treated. According to official figures, 35,613 physicians from 168 countries have been trained for free in Cuba.

The country that constantly brags about being the most generous nation on earth has no qualms about plotting to cut medical services to the poor worldwide—how revoltingly low and sordid can American policy get? Apparently there is no limit.

And these stunning figures don’t tell the whole story. Cuban volunteer doctors go to Third World countries under difficult work conditions, where Western aid workers and doctors are unwilling to spend time. The patients are often the poorest of the poor, who would otherwise never have seen any health services in their life. The Cuban medical solidarity work has been previously praised highly by the World Health Organization and the UN.

The US Government has launched this new offensive through a USAID program. (The grotesque Orwellian irony in the names chosen for these US "aid" organisations is another story.—Ed)  They are  financing ‘non-governmental organizations’ (NGOs) to take action and seek information to discredit and sabotage Cuba’s international health services.

The attempts to sabotage these programs do not include replacing the work performed by Cuban doctors and technicians with other human or medical resources – but is only trying to deprive those who receive these services.

This USAID-led drive comes in addition to diplomatic pressure on several Latin American governments to cancel cooperation in the health sector.

After the 2016 coup in Brazil, disagreements with the new government in Brasilia led to Cuba withdrawing from the Mais Médicos program (see next paragraph). The decision was made because of Bolsonaro’s attacks on the Cuban government and statements accusing the workers of being there «to form nuclei of guerrilla [cells]», and making their continued stay conditional on a reconfirmation of their university degrees and individual contracts.

In the first four years after the launch of Mais Médicos in 2013, the percentage of Brazilians receiving primary care rose from 59.6 percent to 70 percent, ensuring health coverage for over a hundred million Brazilians who had no prior access to healthcare, according to a report by the Pan-American Health Organization, which coordinated Cuba’s participation.

Indeed, as Brazil’s new right-wing president Bolsonaro asked in early November 2018, when the cooperation agreement was cancelled: «Can we maintain diplomatic relations with a country that treats its people that way?»

“We have learned that in 2019, in at least three countries in Latin America and the Caribbean, officials from the US embassy have requested, in a peremptory and suspicious way, that the authorities in the countries to which they are accredited should provide precise data of the cooperation that Cuba offers. Due to the characteristics of this information, we are sure that this information were sent to all US embassies in the region.”

Martínez adds that “in one country, local authorities informed Cuban diplomats that ‘a senior Washington official is interested in knowing immediately how many Cuban doctors provide services here and the amount of investment my government makes for each doctor, as well as the exact geographic location’”

Almost at the same time, “in another country a high-ranking local government official showed the Cuban ambassador an email from the US embassy. written in English, which asked to be informed of where the Cuban medical staff was, what agreements supported them and the duration of their stay,” the Cuban diplomat tells.

The efforts to attack Cuban medical connections to abroad includes other underhanded methods. Enriquez mentions that “in a South American country, legal proceedings have been filed against at least six Cuban doctors for alleged medical malpractice, lawsuits whose origin were known characters with close ties to the US Embassy. The cases were declared baseless by the relevant courts.” And even if some cases turns out to be correct, a handful cases would not invalidate the work of tens of thousands dedicated professionals.

The US government obviously did not share the Brazilian president’s concerns about the Cubans’ professional qualifications or the security risk they posed,  as it created a special «parole» program aimed at headhunting human resources educated in Cuba. In the Cuban Medical Professional Parole Program, CMPP, between 2006 and 2017,  there were active encouragement and pressure for Cuban health professionals to abandon their missions and emigrate to the US, where they would be legally admitted along with promises of employment in the area of ​​their expertise.

Part of an intensified drive

The US government explicitly justifies the tightening of existing sanctions with the cooperation between Cuba and the Venezuelan government under President Nicolás Maduro. «The United States holds the Cuban regime accountable for its oppression of the Cuban people and support of other dictatorships throughout the region, such as the illegitimate Maduro regime,” said US Treasury Secretary Steven Mnuchin. The sanctions also try to prevent Cuba from gaining access to foreign currency.

Following the State Department line, the Secretary General of the Organization of American States, Jose Almagro, organized a conference at the headquarters in Washington DC a week after the NYT article. The subject was «the crimes against humanity committed by Cuba», describing the Cuban medical cooperation with Venezuela as an «intervention tool [..] under the cover of medical […] missions.»

These siege measures are not the only intensifications of the US blockade against Cuba in recent months. In June, Washington announced a series of new restrictions on the island. Travel for education groups was banned. Recreational and passenger ships, including cruise ships and yachts, as well as private planes have since been unable to dock or land in Cuba without fear of draconian penalties in the US.

Access to health services is a human right under the UN Charter, and the United States commit a crime against humanity by trying to obstruct it for political motives, or to misuse or deny health services as a tool in a war of aggression, economic or otherwise.

How Predatory Capitalism Made America the World’s Dumbest Country