‘You’re fired!’ Trump cuts loose of his dog of war (by George Galloway)

The blowing up of Donald Trump's attempt to end the 18-year Afghan War was the straw which broke the camel’s back for the US president, who on Tuesday fired his national security adviser John Bolton.

Trump's attempt to bring to a close the longest war in US history – longer, in fact, than their direct involvement in WWI, WWII and the Vietnam War put together – was to be his own "Camp David moment." It would have mimicked both Carter and Clinton's "triumphs" there with Arafat and Begin and Arafat and Rabin (neither of which have in fact turned out to be triumphs but were wonderful photo-ops).

Bolton's rearguard action and the Taliban's killing of a single US soldier there in the week of the summit brought the Camp David caper crashing down, much to the president's fury, and prompted Secretary of State Mike Pompeo to boast that the US had killed a thousand Taliban in the previous 10 days.

But it was not one damn thing, but one damned thing after another, which has caused the final forking of the "bureaucratic tape-worm" John Bolton, who has slithered through every right-wing administration in living memory. 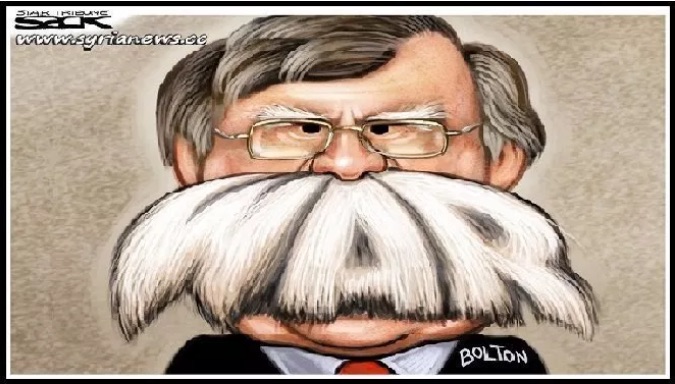 Bolton caused the implosion of the Hanoi summit between Trump and Kim Jong-un, which put US-Korean relations in the toilet just when they seemed headed for the bridal suite. His mad-cap carry-on in Venezuela was another typical Bolton Blunder. Working with his henchman – the doctors of death in Central America in the 1980s were Bolton and Elliott Abrams – he led the president into the recognition of a man in the street in Caracas, Juan Guaido, who claimed he was the rightful president of the oil-rich country and was capable of a coup to prove it.

What followed was a comic-opera coup which could have been a "Carry-On Up the Amazon"  Ealing Comedy circa 1972. Before the day was out, the main coup leaders were hiding out in foreign embassies or – in the case of Guaido – wandering around telling the fewer and fewer who would listen to him that he had once been the president...

Bolton did his damned best to undermine Trump's troop withdrawals from Syria too, another disastrous foreign imbroglio Trump inherited from the Obama-Clinton gang. Despite his campaign promises, he has been quite unable to extricate himself from it, despite it being plain to everyone else in the world that Assad Must Go Nowhere and the gang of cut-throat foreign mercenaries sent in to destroy Syria had completely, abysmally, failed leaving the perennially under-estimated President Bashar Assad the most – perhaps the only – popular head of state in the Arab world.

I have maintained from the start that President Trump did not want war against Iran. But that John Bolton – on his way to a slot on Fox News as I write – surely did. Trump wanted to treat the Iran "negotiations" like the North Korean ones: A blizzard of blood-curdling threats and economic sanctions, culminating in a bear-hugging personally brokered "deal"on prime-time with the Iranian leadership.

ALSO ON RT.COM  John Bolton, welcome to #Resistance? Media, Democrats lament Trump firing national security hawkBelatedly – maybe too late – he discovered that Bolton was not playing games, but wanted the whole nine yards, the kind of creative chaos he ceaselessly advocated for in Iraq with the region on fire.

John Bolton, like so many others, was a "chicken-hawk," always ready to fight to the last drop of somebody else's blood. He evaded the draft during the Vietnam War because as he said himself "I didn't want to die face down in a South East Asian rice paddy."

Nothing wrong with that, if he hadn't continued to "support" the war and wave off to the paddy-fields the 58,000 Americans who did die, face-down, in the war he dodged.

So, farewell then, John Bolton. You killed a lot of folks. Thanks to God and President Trump you will kill no more.

About the author(s)
George Galloway was a member of the British Parliament for nearly 30 years. He presents TV and radio shows (including on RT). He is a film-maker, writer and a renowned orator.