Home AMERICAN BRAINWASH Who killed Boris Nemtsov? And why?

Who killed Boris Nemtsov? And why? 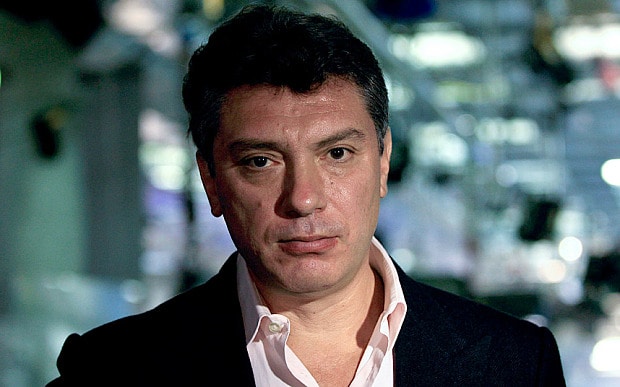 Who was Boris Nemtsov?
At one point, just after the dissolution of the Soviet Union and the rise to power of Boris Yeltsin, Nemtsov was Russia’s Golden Boy, the nino adorado, handsome, smart, westernized, the face of the future. He had a meteoric rise in Russia’s government, eventually landing the plum bureaucratic job in the land, managing the “loans for shares” program, which bankrupted Russia and created the oligarchy by selling off the sovereign wealth of the Russian people for pennies on the dollar.

What was the “loans for shares” program?
The program was created to bring about the privatization of Russian industries. It worked like this. In return for cash loans Russia would put up shares in state-owned industries as collateral. After a year, if the loans were not repaid, the shares would be put up for auction, with a minimum bid of the value of the loan, the state and the lender to split anything over that. Bidding in the auctions was by invitation only.

As a live Putin opponent ready to embarrass the Kremlin and provide propaganda hooks for America's hybrid war and color revolution attempts against Russia Nemtsov had exhausted his utility to the West. At that point he became much more valuable as a dead martyr. Thus it was the West that had something to gain from Nemtsov's death, not Putin, for whom Nemtsov was a mere small annoyance.

Would-be bidders set up shell companies to be the under-bidders to make the auctions look good. There was no agreed value of the assets. A bright ten-year-old should be able to see what would come of this. But to the untutored, a million USDs sounded like a fortune; they didn’t know the asset was worth a billion. To the not-so-untutored, it sound like the opportunity of a lifetime, if the management of the auctions was crooked enough. The staged auctions created a criminal class with the wealth of Russia in its hands.

O what a fall was there! Who was Boris Nemtsov when inflation hit 2000%, stripping the life savings of tens of millions of Russians, when revelations were made, when people had time to watch and learn, when Russia defaulted?

From the Golden Boy, Nemtsov became something you scraped off your shoe.

The Comeback Kid?
The west is used to the reemergence of disgraced politicians and government officials after a few years keeping a low profile. Ukraine was a textbook case of this, electing an inept and corrupt government, reducing its leading figures to single digits in the votes in the following election, and one election after that recycling them. Currently in Ukraine we are seeing Orange Revolution, Act III.

Virtually unemployable in Russia, Nemtsov looked like a possible bargain to the west. Pay him to become a traitor to his country; he should come cheap. Worth a try, for the price of a parade of high-priced hookers and tankers of booze and whatever.

It was not to be. Nemtsov wasn’t stupid. Shortly before he was murdered, a Russian magazine asked him about his political future and he said “I have none. Russians are never going to forget and forgive the nineties.” They also asked him if he was afraid of Putin, and he laughed. After Nemtsov’s murder, the magazine ‘revealed’ that their editors had shortened the piece, and they were going to publish the whole thing since it had more interest now. In the new and improved version, Nemtsov reveals that he was in constant fear for his life, and so was his mother. His mother, for god’s sake! They have no shame, but also no brains. They left the the original version findable on their website.

Cui bono?
The gamble on Nemtsov had turned out to be a losing bet. There was not going to be a comeback. Years of effort had failed to budge the universal contempt in which he was held. He was useless.

Unless . . . perhaps if he were to die, there was mileage to be gotten from him.

The dead Crusader
Mileage like this. Shortly after his murder, one of his entourage reported that he had left a scratch pad with doodles on it that looked as if he was talking on the phone to someone about dead Russian soldiers in the Donbass.

Next, it was revealed that Nemtsov had been about to begin investigating dead Russian soldiers in the Donbass. A motive!

Then it was announced that Nemtsov had written a report about his investigation of dead Russian soldiers in the Donbass.

Today the book is being advertised for sale.

A man’s dying words are given special credibility in western law. His words after death, not so much.

SEE BELOW: Typical tendentious article suggesting that Putin ordered the murder. This was run by The Guardian, a onetime progressive British publication currently operating as a zombie platform used to disseminate deep state propaganda. Many Western media ran similar versions of the story, all pointing to the Kremlin as the party that ordered the hit.

About the author(s)
Cass Dean is an expert on many topics, but she specialises in Russo/Western affairs, the Cold War, and US led imperialism. She describes herself as "old and female," and as. "a dissident intellectual writer," but unlike many of those, I do not think the treatment of dissident intellectual writers is the most important thing about a society.  I would put the kids ahead of that, for one thing.  And, btw, it’s Cassandra, not Kas for Kastiel.