Enhanced and partial transcript of a PressTV Interview 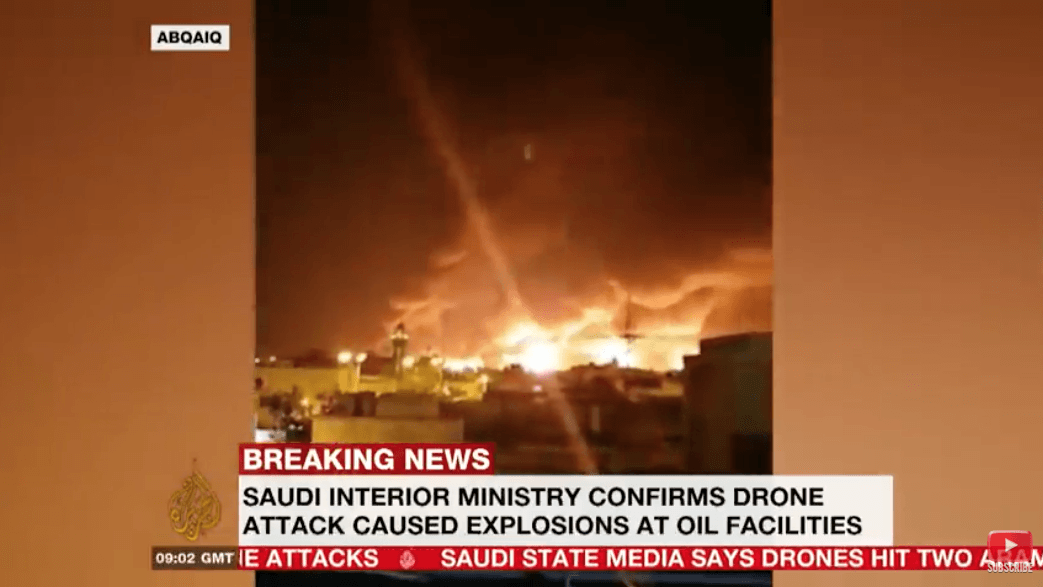 
Saudi Arabia says the recent drone attacks on the state-run oil company Aramco, led to a temporary closure of its facilities and disrupted the kingdom’s oil production and exports.
[Saudi] Energy Minister, Abdulaziz bin Salman said the attacks led to the interruption in production of an estimated five-point-seven million barrels of crude per day. The amount is equivalent to five percent of the daily global supply of crude oil. Meanwhile, Crown Prince, Mohammad bin Salman, said his country is willing and able to deal with Saturday’s drone strikes. Also, the U-S secretary of state has accused Iran of being behind the recent attacks. Mike Pompeo claimed there is no evidence to prove that the attacks were launched from Yemen. He was actually adamant about blaming Iran for the attack, without any shred of proof. This is while Yemen’s Ansarullah movement [the Houthis] has claimed responsibility for the drone strikes.  Saudi stocks dropped dramatically following drone strikes on two Aramco facilities by Yemeni forces; an attack that halved the kingdom’s crude production.

Saudi Energy Minister, Abdulaziz bin Salman said the attacks led to the interruption in production of an estimated five-point-seven million barrels of crude per day. The amount is equivalent to five percent of the daily global supply of crude oil. Yemeni forces launched the massive drone attack in response to the Saudi-led coalition war that has lasted for more than 4 years on the impoverished nation on Saturday.

PressTV   Could you please comment on the consequence of this reduction in the oil supply by Saudi Arabia?

PK   First, lets make one thing crystal clear – Mr. Pompeo is a flagrant liar, has been in the past with everything he says against his own fabricated enemies, and he will very unlikely change, as the type of his hawkish aggressive warrior character will not change. Therefore, everything Pompeo says and pretends which such assurance that most people realize it’s a fabricated lie as he did not – and never does – provide any evidence. Therefore, whatever he says and pretends to be the truth without evidence, has to be taken with more than a grain of salt. 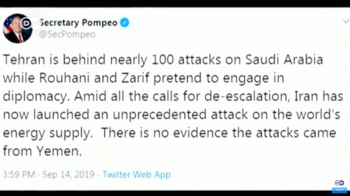 In fact, immediately blaming Iran for the drone attack on ARAMCO, is without any foundation; it is an outright lie, just to put more dirt on Iran, to further denigrate Iran. It is very clear to me – who have worked for 7 years in Yemen – that the Houthis have the capacity to develop their own drones – they have a flying range potential of at least 1,000 km.
It is very simple and very logical, the Houthis are gradually getting their strength back and are avenging themselves for the horrendous aggression launched for more than 4 year by the Saudis against their country – of course, with staunch support from the US, UK and the French.

Let's just remind ourselves, that inhuman abhorrent aggression has cost tens of thousands of Yemeni lives – most of them children, women and the elderly and weak - from direct bomb attacks, from famine, and from cholera and other sanitation related diseases. Today still a million people are at risk of a cholera epidemic.

Having said this – the consequences or impact of a 5% oil output reduction due to the burning ARAMCO wells is insignificant. Of course, speculators – the Goldman Sachs type, who are the chief manipulators behind oil prices – would like you to believe that this is ample ground for hefty fuel price increases – in reality not at all.

Of course, in our predatory capitalist world, the stock market wheelers and dealers, may try to cash-in on this event – which in reality has – or should have – zero impact on the world oil supply.

This shortfall could easily be made up by lifting sanctions on Iranian and Venezuelan oil sales… so it’s just a question of logic – and foremost – of justice, international law and Human Rights.

PressTV   What about the fragility of the Saudis military power?

PK   Of course, the Saudi military power is nothing without the full support and guidance, by weapons and technical and strategic advice directly from the Pentagon, CIA – and the European vassals, and – of course – from weapon manufacturers and weapon sales sharks, in the UK and in France.

The Saudis from day one – in October 2015 – were just launching a proxy war for the US against Yemen – Yemen has a key strategic location in the Gulf and Middle East, and also off-shore deep hydrocarbon deposits – and god forbid, may not be ruled by a people-friendly – a socialist leaning government. For the last 50-some years Yemen was ruled by a US puppet, or puppets – which was OK for the US, but once people get tired of injustice and corruption, they decided to dispose of their nefarious regime and replace it with the popular Houthi movement.

When the Saudis agreed in the early 1970’s as head of OPEC and on behalf of OPEC, to sell crude only in US-dollars, the US Administration offered them in turn – “forever” military protection, in the form of multiple military bases in the Saudi territories. Without this protection, the Saudis would not have survived as long as they have with their horrendous discriminatory and corrupt government and, of course, without that protection, OPEC might not have stuck to the “dollar-only” rule to trade hydrocarbons. – We might be in another world today – but, we really don’t know how the dynamics might have worked out.

Yemeni Political Commentator Hussein al-Bukhaiti believes Ansarullah forces are sending a message to Saudi Arabia to either halt their attacks on Yemen or face the consequences.
SOURCE: PressTV

About the author
Peter Koenig is an economist and geopolitical analyst. He is also a former World Bank staff and worked extensively around the world in the fields of environment and water resources. He lectures at universities in the US, Europe and South America. He writes regularly for Global Research, ICH, RT, Sputnik, PressTV, The 4th Media (China), TeleSUR, The Vineyard of The Saker Blog, and other internet sites. He is the author of Implosion – An Economic Thriller about War, Environmental Destruction and Corporate Greed – fiction based on facts and on 30 years of World Bank experience around the globe. He is also a co-author of The World Order and Revolution! – Essays from the Resistance.
This work is licensed under a Creative Commons Attribution-NonCommercial 4.0 International License.
Make sure many more people see this. It's literally a matter of life an death. Imperial lies kill! Share widely.
1
FacebookTwitterPinterestRedditEmail
previous post

Empires Are A Secret Until They Start Falling