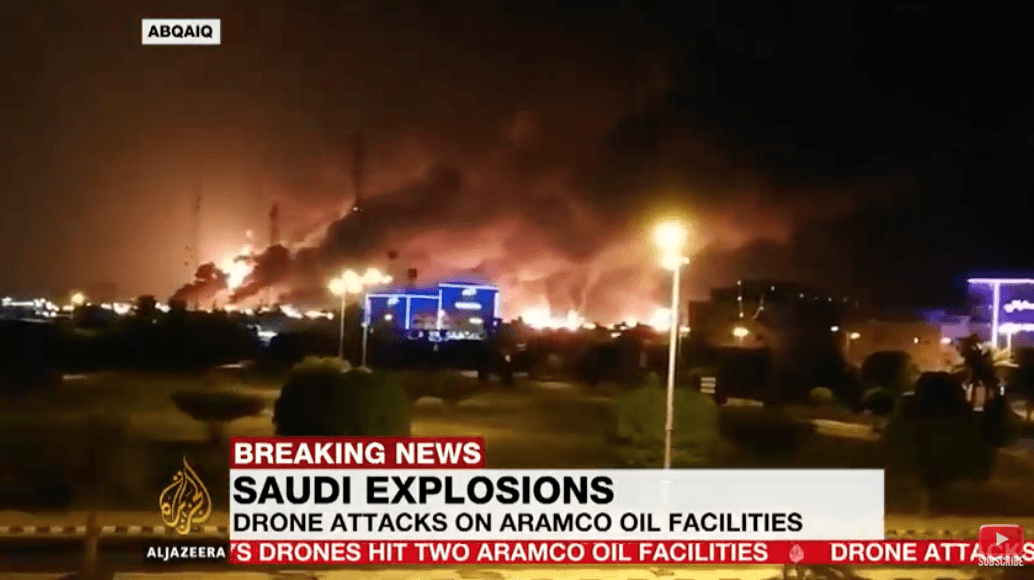 ABOVE: Explosions, dark smoke and flames are heard in Saudi Arabia's key oil producing centers, as Houthis strike them with relatively primitive drones.

The facilities are operated by Saudi Aramco, Saudi Arabia's state-owned oil giant, and produce up to 70% of the country's crude oil output.

The Wall Street Journal, quoting "people familiar with the matter," reported that Saudi Arabia is shutting down about half of its oil output following the strikes. The shutdown would amount to a loss of about 5 million barrels a day or roughly 5% of the world's daily production of crude oil, the Journal said.

The attack by the Houthis in the war against a US-backed and Saudi-led coalition comes after weeks of similar drone assaults on the kingdom's oil infrastructure, but none of the earlier strikes appeared to have caused the same amount of damage.

While the Houthis do not have significant financial resources, the drones have given them a way to hurt Saudi Arabia, which was the world's third highest spender on military equipment in 2018, investing an estimated $67.6 billion on arms, the New York Times said.

This has given the Saudis a challenge they can't confront, no matter what their financial, military or intelligence capabilities are," Farea Al-Muslimi, co-founder of the Sanaa Center for Strategic Studies, which focuses on Yemen, was quoted as saying.

The attacks some 500 miles from Yemeni soil not only exposed a Saudi vulnerability in the war against the Houthis, but demonstrated how relatively cheap it has become to stage such high-profile attacks. The drones used in Saturday's attack may have cost $15,000 or less to build, said Wim Zwijnenburg, a senior researcher on drones at PAX, a Dutch peace organization. 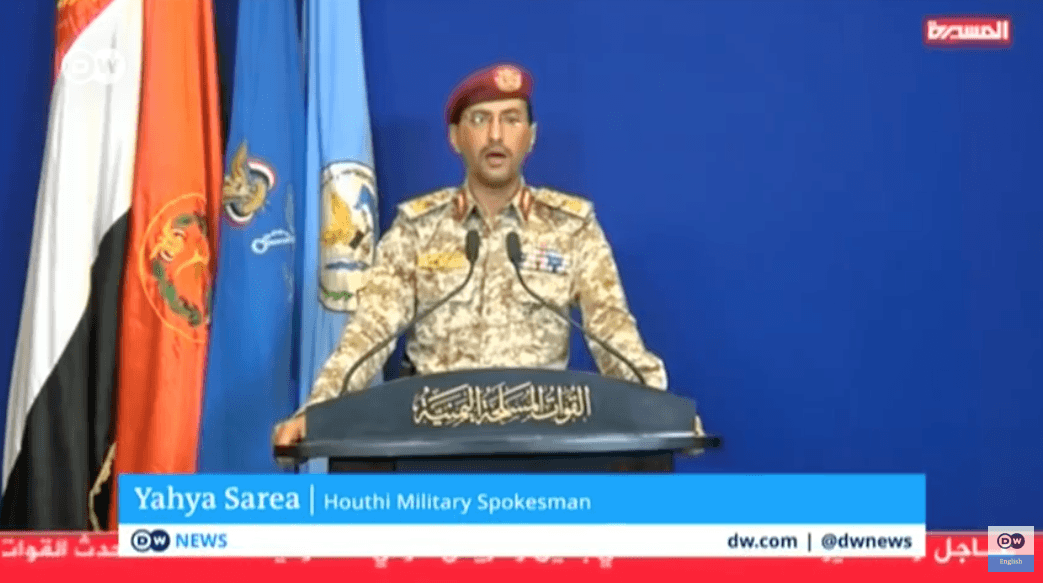 ABOVE: Houthi military spokesman confirming the drone attacks, "which will continue until Saudi coalition ceases its criminal aggression against Yemen."

Conflict Armament Research, was quoted by the Associated Press as saying that the rebels have flown drones into the radar arrays of Saudi Arabia's Patriot missile batteries disabling them and allowing the Houthis to fire ballistic missiles into the kingdom unchallenged.  (Drones have small heat "signatures" making them difficult to intercept even by sophisticated air defences.)

Editor's Note: There's a lesson here for all the arrogant bullies of the world. If the militarily modest Houthis can defeat super-expensive Saudi arms, it is a fact the Chinese and Russians can defeat the NATO array of mostly offensive weapons, starting with aircraft carriers, virtual sitting ducks for sophisticated missiles.  This confirms what sane people have known for a long time: short of an all-out nuclear war with absolutely no winners, the Empire or any other belligerent superpower cannot hope to win any future wars.

In March 2018, it was reported that US-made missile defenses spectacularly failed in Saudi Arabia.

David Axe of VICE, wrote, at least five American-made Patriot missiles apparently missed, malfunctioned, or otherwise failed when Saudi forces tried to intercept a barrage of rockets targeting Riyadh on March 25, 2018. That's bad news for the US military and its closest allies, who are counting on the Patriot to stop large-scale enemy attacks during a major war.

It's nothing but an unbroken trail of disasters with this weapon system, Axe wrote.

The ground-launched, radar-guided Patriot missile, which is 19 feet long in its basic version, has been controversial since shortly after its introduction in 1984. It missed many of its targets during the 1991 Gulf War. Twelve years later during the US-led invasion of Iraq, Patriot crews shot down two allied warplanes, killing three crew members.

In August 2015, as the U.S. State Department approved a $5.4 billion sale of 600 Lockheed-made Patriot missiles to Saudi Arabia, alongside an additional half billion dollars in ammunition for various smaller weapons.

Tellingly, Saudi Arabia is buying 68% of its arms purchases from the U.S. According to the Stockholm International Peace Research Institute (SIPRI) from 2014-18, the kingdom received 56 combat aircraft from the United States and 38 from the United Kingdom, with aircraft in both cases equipped with cruise missiles and other guided weapons.

Associated Press quoted UN investigators as saying that the Houthis' new UAV-X drone, found in recent months during the Saudi-led coalition's war in Yemen, likely has a range of up to 1,500 kilometers. That puts the far reaches of both Saudi Arabia and the UAE in range.

Know Your Enemy! Not China…Xi Jinping!